The Cougar Strikes (Out) 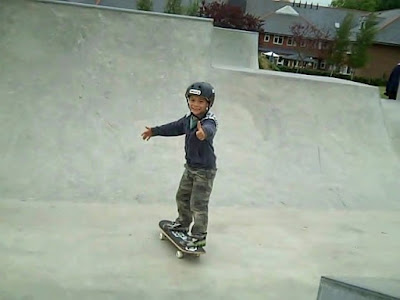 Last week I took 3Po and Jammy to the local skate park to practice going down the slopes on their new skateboards. We tried to get there early because most of the local schools haven't yet begun their summer break, so the skate park would most likely be empty and our two beginners could have the whole place to practice on.

When we got there, we were a bit disappointed to see that a couple of older teenagers were already there -- whether they were cutting classes or had already left school, we weren't sure. Fortunately, they proved to be very nice, sharing the park with 3Po and Jammy, making sure they didn't crash into the boys or intimidate them.

A bit later on I tried to help Jammy go down one of the steeper slopes. Jammy went out of control and he jumped off his skateboard, unhurt, but I wasn't so lucky. Jammy's skateboard shot up the ramp and flew into the side of my knee. I sank to the ground, eyes closed, wincing in pain, absolutely certain I had broken something. I heard one of the skateboarders running to Jammy and me, saying, "Can I do anything to help?"

I have to admit, I was flattered. He was a nice-looking boy, about 17 or so, and he could have just ignored us and kept on skateboarding. Alfie and his mum were seated on a nearby park bench and had seen the whole thing. Neither of them got up to check on me, yet here was this polite young gentleman, offering to help. Would he be as nice to anyone else? Probably not. He must think I'm such a hip, cool mum, risking injury and enduring pain to helping my son learn to skateboard. I wonder if he's wondering how old I am?

I opened my eyes, smiled my most charming smile and simpered, "No, thanks so much, I'm fine. I'll just lie here for a while until the pain goes away". I was fully expecting him to ignore my protests and help me up.

His response? "Umm, actually, I was talking to your son".

The next time Jammy goes skateboarding, I'm sitting on the park bench with my own generation.
posted on Monday, July 19, 2010 Labels: about me, funny stuff
Email ThisBlogThis!Share to TwitterShare to FacebookShare to Pinterest

This so totally made my day! :) And so very something that would happen to me.

I was hoping for a nice ending! you really made my day smile.I love you post, looking forward to read more of your work.

Awesome Kid! It was pleasure reading your post! It made my day. ;) Anyways, Thanks for the share.