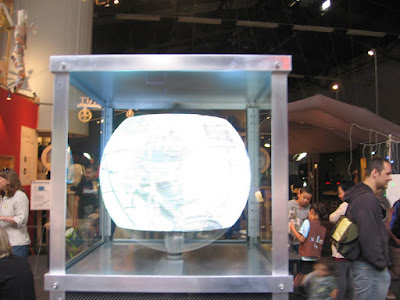 This weekend we were invited to the San Francisco Exploratorium to meet some amazing young inventors who will be showcasing their creations at the 2010 Bay Area Maker Faire. We thoroughly enjoyed last year's Maker Faire, so I knew it would be an event worth seeing, and great run-up to the main event on May 22 and 23. 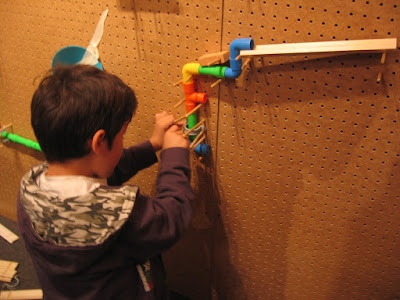 Sure enough, we got a great sneak peek at some really cool inventions -- a marble run, a levitating machine, a fire breathing dragon and a rotating light sphere. We got to listen to several inventors explain how their inventions worked, what challenges they encountered and what they love most about their inventions. The Open MAKE exhibition area also had some great interactive exhibits like a marble run wall, where the boys could make their own marble run with wooden pegs, ramps, pipes, platforms and other doo-dads.

But their hands-down favorite activity was making these Scribbling Machines. 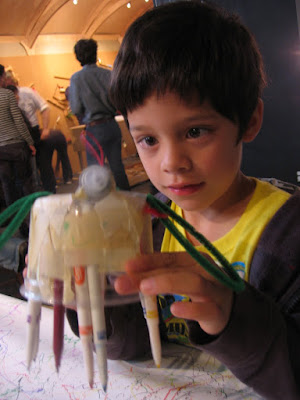 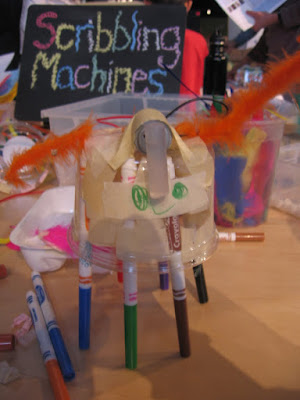 All you need is a small rotary motor, a hot glue gun stick, a box or plastic tub, some markers and tape. You stick the glue stick into the rotating shaft of the motor to make a propeller -- but you don't stick it in the middle, stick it slightly off-center so that your machine will actually travel instead of just vibrate. Attach one of the motor's wires to one end of an AA battery with a rubber band, and attach the motor to a plastic cup with tape. For legs, tape 4 or more markers, marker-side down, to the bottom of the cup. They also had bits of feathers and pipe cleaners and stickers so kids could decorate their contraptions.

To make the machine go, attach the motor's second wire to the other end of the battery. This turns the machine and the propeller, which makes the whole thing wiggle around. The markers will write on whatever surface you place your machine on, since it's vibrating so much.


The boys were absolutely entranced! We had to give the motors back so that another museum-goer could get the chance to try it out, but they had vending machines which sold the motors for just 50 cents. I bought one for each kid, and now they're have a wonderful time inventing all sorts of contraptions using the motor. What a great way to inspire future makers!

Disclosure: We received complimentary admission to the San Francisco Exploratorium to attend this event. The views and opinions expressed here are my own.
posted on Wednesday, April 28, 2010 Labels: hi-tech, Silicon Valley lifestyle, things to do
Email ThisBlogThis!Share to TwitterShare to FacebookShare to Pinterest