Making Memories at the Maker Faire

Our jam-packed schedule last weekend has left me with a sore throat and bad cold, but as far as I'm concerned, our Weekend of Science was worth it. After all, how many opportunities do you get to meet Bill Nye the Science Guy, see things blown up, watch bowling balls trigger a giant mousetrap and do other fun experiments? We barely had enough time to recover from our visit to the San Jose Tech Museum on Saturday, then on Sunday it was off to see all kind of gizmos, contraptions and inventions at the Bay Area Maker Faire.

This was the first I had ever heard of the Make Faire, but apparently this is the largest DIY fair in the US, and it attracts hundreds of people. Alfie and I couldn't believe that people would pay 50 bucks to get in, but the place was packed! The high cost became more understandable when we got to the workshop section; fairgoers can make all kinds of crafts there and take them home for free. Alfie could probably have stayed at the whole morning. . Stuff gets blown up, lasered, melted, sawed off, cut, hammered together, riveted and soldered, all in the name of innovation, experimentation and fun. 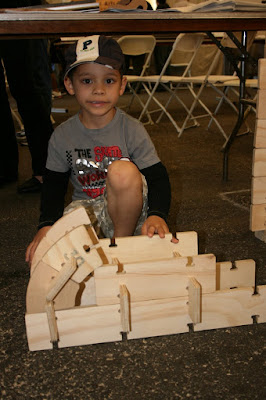 3Po and Jammy were really getting into the wooden structure they were building, but we had to drag them off to see the rest of the fair. They protested bitterly, of course, until they saw that the Maker Faire had so much more to offer -- robots and bikes walking all over the fairgrounds.... crazily-decorated cars on display.... steam engines.... rocket launchers.... huge flamethrowers...... 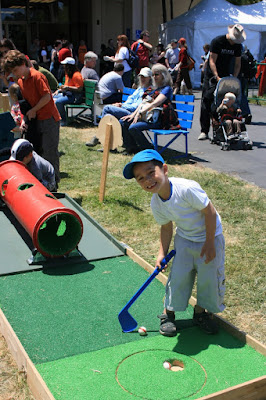 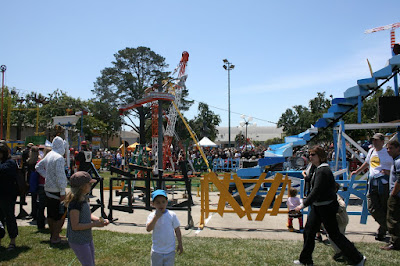 ....a life-sized Mousetrap, just like the board game..... and tons more. We probably only got to see a tenth of what was on display. 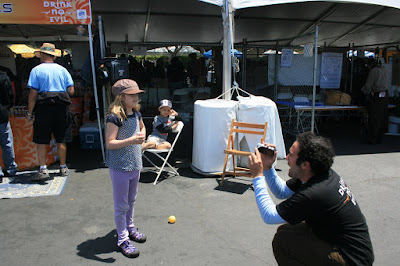 They also had a food section with beer brewing demos, cheese making demos, and lots of booths featuring organic, artisanal, homemade, alternative food and drink. At one of the booths, The Pea and Jammy agreed to be interviewed and dance like a monkey for 20 seconds, in exchange for a free bottle of juice. Just like their mama, my babies' swag-gathering instincts are strong and I grew misty-eyed thinking of it. Besides, it's not like they don't ham it up for me and the blog every other day of the year anyway.

There just wasn't enough time to take it all in ! In fact,as we were eating lunch (delicious maize-wiches with fillings like pork and avocado, shredded beef and tomatoes), the phone rang. It was the mother of Pea's friend, telling us they were just about to leave to pick The Pea up for her ballet recital. Horrors! My memory had failed me again; turns out The Pea's recital was at 3PM, not 4PM, so we had to leave even sooner than I had planned (and do yet another mad rush in order to get her into costume before the curtain went up).

Everyone was disappointed that we didn't get to stay longer, but The Pea's legions of fans were calling, so we left with our photos, our memories, and some lessons learned for next year:

1) Go early.
2) Plan to spend the whole day.
3) Pack a lunch, or line up to buy lunch before noon.
4) Grab a map so you can check everything out and see what you really want to see.
posted on Tuesday, June 02, 2009 Labels: crafts, family, hi-tech, Silicon Valley lifestyle
Email ThisBlogThis!Share to TwitterShare to FacebookShare to Pinterest

I agree! I went last year for the first time and vowed to do everything you mentioned this year. Unfortunately, the Fair fell on a terrible week-end for us (not sure if it was earlier last year or not) and we only got to stay until noon. It's a tough time of the year - lots of other things going on with school. We only stayed until noon and I could have visited two days worth!

How totally fun! I'd like to see that giant mousetrap.