As a blogger, I've been invited by various PR firms to various events, and to tell you the truth, it would be difficult to pinpoint exactly what makes one event memorable and another event forgettable. Sometimes it's the chance to meet some heroes, both real and fantasy. Sometimes it's the awesome food. Or Swag-to-Die-For. And sometimes, all it takes is the chance to say I Saw It First. 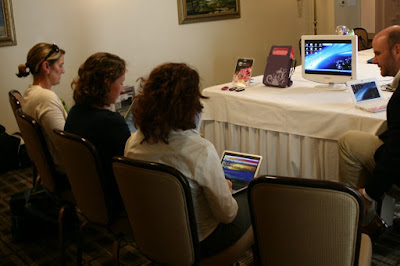 Last week I was invited by Disney Consumer Products to get a sneak peek at their lineup of kid tech products coming out in the fall. I joined fellow SV Moms Linsey, Jessica and Nicole for our own private product demo by Thom Richmond, Disney's Director of Consumer Products. 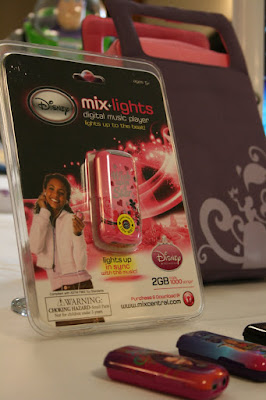 All the toys and gadgets Thom showed us would easily make it on any kid's 2009 holiday wish list, like Mix Lights MP3 player that lights up to the beat of the music, or the Disney Pix Twist, a kid-friendly digital camera with a viewfinder that they can twist around to take pictures of themselves. And it's quite possible that the Ultimate Buzz Lightyear Robot -- with programmable actions, voice recognition, interactive game play, and the coolest animatronic moving mouth ever -- might be the Tickle Me Elmo of 2009. 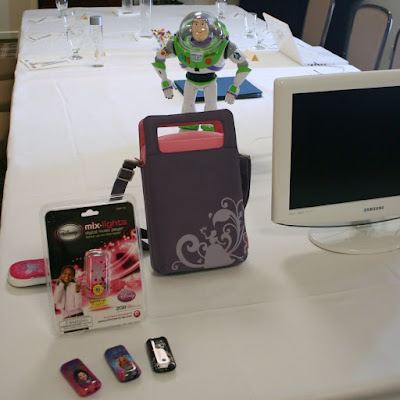 But the crown jewel of Thom's demo was the Disney Netpal, a full-functioning, Windows-based netbook made exclusively for Disney and marketed to 6-12 year olds. Disney's Consumer Products has really leveraged Disney's knowledge of what kids enjoy, and added in some cool parental controls to make it fun, safe, and easy to use. In fact, the Netpal is loaded with so many features that it deserves a post of its own (so watch out for a separate review sometime this summer on Bonggamom Finds).

The event was simple and low key, but it was so exciting to be shown products that aren't even on the shelves yet. Even occasional glitches during the product demo didn't detract from my positive impression of the products because they just added to the sense that we were true Disney Insiders ("Sorry, that doesn't work quite well yet, it's still in beta but we'll fix that for the final version"). Yes, probably with the other bajillion or so reporters they've given sneak peeks to at trade shows and other demos like this one, but it was a nice feeling anyway. And it sure doesn't hurt with the "Moms Know Everything" mystique -- because now I know what my kids are going to whine for even before they do.

I will definitely take tones of photos there!!!

Those products sound great! Can't wait to see them on the shelves this holiday season and looking forward to your review of the Disney Netpal.

we just went to disneyland + that would be perfect for the long car ride + maybe my daughter could have booked a disney hotel with it?

we have the last buzz lightyear robot, but i can't wait to see this one.

thank you for sharing your disney insider tech scoop bonggamom :)