3Po has had a rotten week.  On Monday, he was sent home from school because the school nurse thought he had pinkeye (he didn't).  He stayed home from school on Tuesday and Wednesday because he had a bad cold.  He made it through school on Thursday, but at basketball class on Thursday afternoon he began rubbing his eyes and five minutes later his eyeballs were swollen.  He kept rubbing his eyes, and now they are badly infected.

Poor kid.  To top it off, I have to squirt some antibiotic gunk into his eyes twice a day.  He hates it, says it makes his vision blurry.  The first time I did it, Jammy tried to help his brother out with some words of encouragement:

He then proceeded to draw a picture of what 3Po's eyes would end up like if he didn't have the medicine: 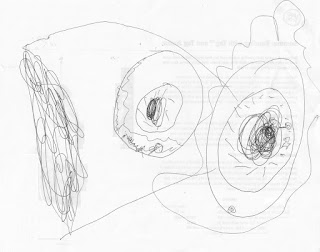 If I thought I'd end up looking like Spongebob Squarepants, I'd take my medicine in a hurry.
posted on Saturday, October 10, 2009 Labels: funny stuff, health, Jammy
Email ThisBlogThis!Share to TwitterShare to FacebookShare to Pinterest

Def. got the feeling from his photo, not comfortable at all! Wow, poor guy! Hope he gets better soon! Diane

Hope he gets better soon and love brother's supportive picture ;-)