If you're English, you'll recognize these well-known sports figures. Even if you detest football, even if you buried your head in the sand, you'd recognize them (trust me, ask my mother-in-law). 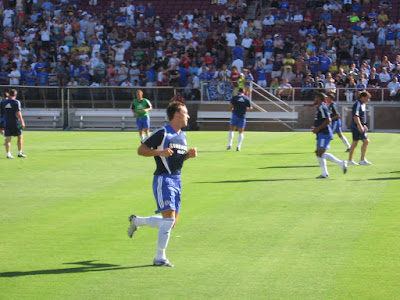 John Terry playing for Chelsea at the Stanford Stadium in 2007. We were so close to the pitch, we could almost feel the sweat as they ran by and whipped their heads around. 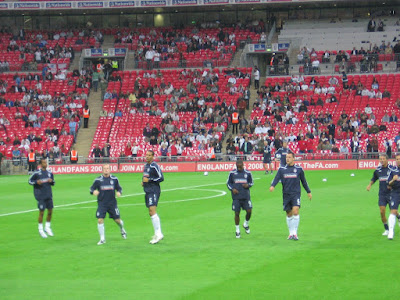 The England national team, circa 2008. Here's my best guess, L-R: Ashley Cole, Wayne Rooney, Rio Ferdinand, Shaun Wright-Phillips, John Terry (I think the last 2 on the right are coaches or trainers). Did I get it right, Alfie? Was I actually listening to you scream at the tv? 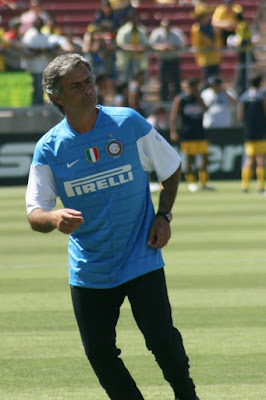 The Special One (Stanford Stadium, 2009). If you don't know this guy's name, you're not a football fan.


For more sports, head on over to the Photo Hunt. And if you do comment, please leave your link in the Mr. Linky below!

Not really all that familiar with the pro footballers, but great shot.

You're right, I've got no idea who that guy is :P
But that is one EXTREMELY great sport that bring men together with chips and beer :)

I love soccer too. We can't say football here,it means something else. Great photos Bongamom. Happy weekend to you.

soccer is fun, full of excitement and enthusiasm. great pictures for the theme.

Excellenet shots. DId you take them at Stamford Bridge itself? Happy weekend

Don't know who he is but nice shot of the Special One.

Soccer is fun.. My boy loves that but he's not really the sporty type.

Happy weekend! My entry is here.

Great shots and an excellent post for the theme. Happy weekend.

I like this post and as a soccer mom, well, all I can say is nice work!

Oh I love watching soccer. These are great pics!

These action packed games are thrilling to watch :)