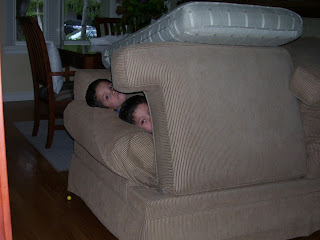 I love buying toys for my kids. Since they're at home with me for so much of the day, I like to have a good variety of toys, and I try to rotate them so that the toys stay interesting and fresh. Right now all three are into Legos, Tinkertoys, Playmobil and Zoob. There is no age or sex discrimination here: right now Pea is crazy about the Littlest Pet Shop toys so her brothers play along with her, and she enjoys Thomas the Tank Engine as much as they do. With summer coming, I've also stocked up on some outdoor toys like T-ball, soccer balls and gardening tools. Sure, we have a couple of flashing, battery-operated "passive" toys as well as junky pinata goodies and McDonalds Happy Meals, but for the most part I like to think that they have a good assortment of "good" toys.
But sometimes, the best toy is no toy at all. The simplest form of childhood entertainment requires nothing but objects around the house and their imaginations. Everyone knows that the big cardboard box that their fancy new toys come in is often just as fun to play with as the toy itself. I love seeing my kids play with nothing and seeing what they come up with. Here are some simple ideas that have kept my kids amused for hours on end:

* Same with blankets spread out over tables.

* And to get to the cardboard, what do my kids do with the toilet paper? They unroll all of it to make roads.

* Two or more chairs lined up, one behind the other, make a train.

* Laundry baskets get turned into rocket ships, boats, submarines, and snail shells (when turned upside down).

* When my in-laws were in town, the kids turned the guest bedroom into an airport and their bed into an airplane. For about two weeks, "poor" Nana and Dar were forced to stay in bed as they were flown from one exotic destination to another.

* Today Jammy looped a computer mouse to his bicycle helmet, told us it was his vacuum cleaner, and proceeded to clean up the kitchen.

* Ever since he saw the surfers at Half Moon Bay last weekend, 3Po has been jumping on pillows and called them his surfboard (he has already forgotten that last February he was doing the same thing and calling it his snowboard).

If anyone else has any simple ideas for entertaining children, I'd love to hear about them, because it's going to be a long summer!

Your children have great imagination. My son also loves playing with large boxes and pretending they are a fortress of sorts. It's fun seeing kids having a great time and using their creativity and imagination.

Dirt! We have a very shady spot in the back of our yard where grass simply won't grow. My older daughter can spend HOURS out there digging, moving it around, etc. We occasionally add a bag of sand to it, but otherwise it's free entertainment. I love seeing her do it- I just have to make sure she doesn't take my pots and pans out to "cook" with!

If we could /would only hold on to that precious imagination as we weather the hormone surge of adulthood, what a simpler, safer world we'd inhabit.
Great post!
rel

I remember draping sheets over chairs to makemyself a secret room.
And all the wonderful things you could do with crayons and a big empty box.
Waving at you from New York,
Frances

Hi!
Thanks for stopping by my blog.. I love your posts too!

My daughter is 5 (next week) and our simple toy/ craft idea is this:

Take a 1/2 gallon oj or milk container rinsed out and color and decorate with colored paper and make a bird house out of it.

Camille spends endless hours making these houses for the squirrels and birds. Each has a very unique door!

Hee hee... these are all wonderful ideas! Oh, to be a kid again!

Lovely post - all you need is a good imagination indeed!

This is a great take on the post. But I don't think you'll need any ideas, kids are great at finding them on their own.
ps my youngest loves little Pet Shop too, a big hit in France!

My kids is a hoarder. He loves to fill random bags with his stuff. I keep old gift and shopping bags and pull them out when he can no longer hold all his stuff. His current bag has and old valentines day card, pressure gage, sunglasses, draedle and wrist sweat band. The adventures he can have with these things... he also not only plays with the boxes, but is obsessed with cutting out the pictures and pasting them various places.