How do I love thee? Let me count the ways 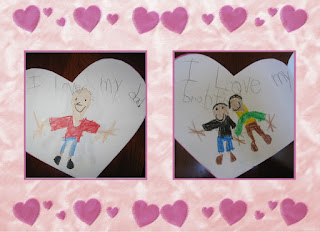 Today, Valentine's Day, Graham and I did not exchange chocolates or flowers. We are not booking a babysitter and going out on a date. We're having spending the evening with our kids, checking out the valentines they got from their friends and making chocolate-covered strawberries. After they go to bed we're getting some Indian takeout and probably watching American Idol. Are the kids cramping our style? Nah. After all, if Valentine's Day is about love, what greater love is there than the love of a parent for a child?
I've already written on SV Moms Blog about why I love Graham. But Valentine's Day wouldn't be complete for me without saying something about the love I have for my kids.
14 Reasons I love Natalie:
Because she's my oldest;
Because she's my only girl;
Because I never dreamed I would have a girl with green eyes and golden curls;
Because she looks so cute with her tongue sticking out whenever she's concentrating really hard;
Because she cries at every full-length movie, from Cinderella to Cars;
Because brushes her teeth and washes her face in the morning without being told;
Because she's a wonderful big sister to her brothers;
Because she can spend hours and hours drawing picture after picture, just like I used to;
Because she never complains that her friends have more toys than she does;
Because she genuinely wants to make us happy;
Because she still likes sitting on my lap;
Because she says she wants to live with me for ever and ever;
Because she never gives up at anything she does;
Just because.