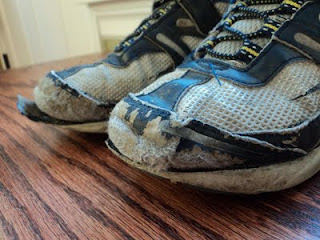 I don't think I ever ruined a piece of clothing throughout my childhood. Sure, I ripped a hem or two, and stained a few shirts with permanent markers or paint.  But for the most part, I outgrew my clothes before I wore them out.   I never, ever subjected them to the kind of abuse that 3Po and Jammy rain on their trousers and shoes every single day.   Maybe I had a bigger pool of clothes to draw from and alternate.  Maybe clothes and shoes were sturdier back then.  I guess I wasn't as active as they are.  And I'm sure I didn't go around sliding on my knees and elbows in the mud and grass and concrete. So I never ended up with shoes that are literally peeling from their soles.  It took 3Po just one month to get his shoes in that state, people.  ONE MONTH.

Here are a few more photos showing the destruction my sons can wreak upon their footwear:

3Po is our worst offender; at one point the average lifespan of his shoes was 4 months.  This pair is the oldest so far, at 6 months.  I nag him to death about scuffing his toes while walking, so he does walk properly, but I suspect he scuffs his toes on the floor when he's sitting at his desk or at the lunchyard tables. 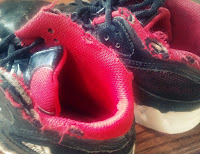 Jammy is relatively kind to his shoes; they last about twice as long as 3Po's do.  Most of the damage to this pair is cosmetic: frayed fabric at the ankles, detached insole, frayed and unraveled shoelaces (for some reason, Jammy's shoelaces fray faster than any of the others'). They were getting a bit tight, so I replace them.   Doesn't it suck that the reward he gets for taking care of his shoes is having to wear scruffy shoes while 3Po gets a new pair? 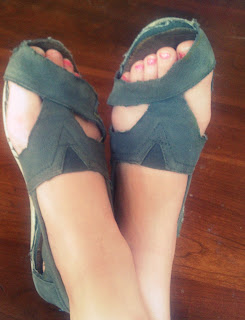 I've tried patching the boys' shoes up with superglue and epoxy, but my fixes never last long.  Fortunately, I'm not as helpless when it comes to The Pea's shoes.  We bought her a pair of TOMS shoes for Christmas, and she had worn out the toes and bunions by March.  Patching them up was out of the question because the holes were way too large.  Rather than throw them out, I turned them into sandals.  I got the idea from a photo that I saw on the web; fortunately, the parts she had worn out more or less corresponded to the areas that were supposed to be cut out.  I basically followed the stitch lines of the shoes, leaving wide strips of fabric intact to keep the shoe together.  To keep the canvas from fraying, we dabbed the edges with clear nail polish (we were too lazy to hand-stitch the edges).  So far the edges are holding up, and they don't flap around or come off when she walks in them.  Even more important, her friends say they're cool, so she's given them a tentative seal of approval for jaunts outside the house.

Here are a couple more photos of the shoes -- the side views -- so you can see the cuts that I made. 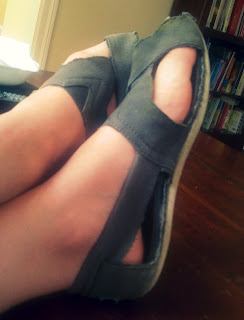 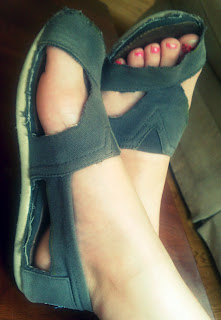 If only I could give my boys' shoes a second life too!  Alas, they are just too beat up to donate, but there's a drop-off box at the Nike Outlet for recycling rubber-soled shoes into rubber playground material.  At least in some form, their shoes will live on.

From ashes to ashes, dust to dust... and rubber to rubber.

posted on Tuesday, May 01, 2012 Labels: crafts
Email ThisBlogThis!Share to TwitterShare to FacebookShare to Pinterest