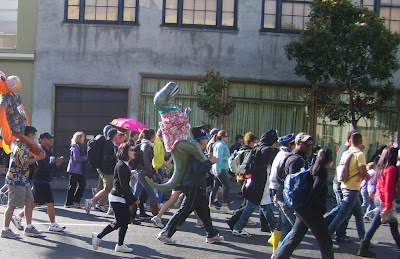 Bonggamom's note:  This is an old post I wrote for Silicon Valley Moms in 2007.  I'm reposting it here to celebrate Bay to Breaker's 101st race.

I survived Sunday's Bay to Breakers race. Even more amazing, I ran and survived it. Despite various medical setbacks and general laziness, I managed to get my body back into shape for the 7.46 mile run. But was it worth it? Today my body is aching, my toenails are falling off..... why did I bother to push myself? There's something to be said for hanging out near the back of the pack and walking it like I did last year. For anyone thinking of doing it next year, here's my post-race analysis of the pros and cons of walking versus running:

Why I wish I had walked Bay to Breakers instead of running it
1) I could have spent the week before stress-free and relaxed.
2) I would have been going slow enough to see all the costumes and crazy characters.
3) Which means I could have stared at the naked people.
4) I wouldn't have felt like a failure when I had to slow down to a shuffle/walk going up that wickedly steep Hayes Street Hill.
5) I could have bounded out of bed the next day without my body aching.
6) My big toenail wouldn't be killing me because I ran in shoes that were too small.
7) I would have eaten an ice cream sundae afterwards and still convinced myself I earned it.


Why I'm glad I ran Bay to Breakers
1) I spent the past month gradually building up my strength, which I hope is making me a healthier and happier person.
2) Nothing compares to the feeling of pride I got when I saw the excited look on my son's face when he saw me running past him.
3) Trust me, you don't actually want to stare those naked bodies, it's better to run past them.
4) I feel a real sense of accomplishment in setting a goal and achieving it.
5) My ass hurts, which means I'm one step closer to getting Jessica Alba's curves.
6) Toenails grow back anyway, and I can now buy nice new running shoes.
7) I don't feel guilty about the ice cream sundae I had afterwards!


Whether you decide to walk or run, as the Nike slogan says, Just Do It. Either way, you'll have a great time.

posted on Monday, May 21, 2012 Labels: about me, fitness, funny stuff, Silicon Valley lifestyle
Email ThisBlogThis!Share to TwitterShare to FacebookShare to Pinterest