Drunken College Students, cavewomen and 40 other things I saw at Bay to Breakers 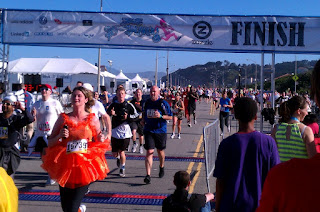 It seems like people who turn forty always want to prove that they're no older or more decrepit than they were at 39 -- in fact they want to prove to the world that they're fitter, hotter, wilder, than they were the year before.  I guess I'm no exception, because I signed up for the 2012 Bay to Breakers determined to improve on last year's finish time.  But as always, I slacked off on training in the months leading up to the race and decided to walk the race instead -- and as always, ended up running it anyway.  The good news is that I managed to shave off a couple of minutes from my finish time  (1:18:51, down from 1:21:31 last year), even though I literally stopped dead in my tracks for 2 or 3 minutes to primp and groom myself before the race photographers started taking photos (I needed proof that that I was fitter and hotter than last year). 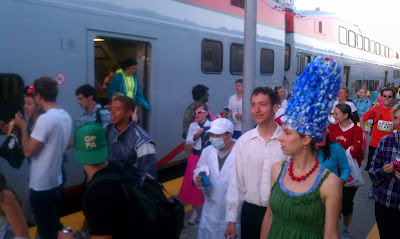 Really, the only difference between this year and previous year's races was that I left my cheering squad (aka Alfie and the kids) sleeping at home, and took the train up to San Francisco by myself for the first time.  Since I live near Stanford University, I boarded the train with hundreds of college students, already knee-deep in beer at 5:30AM (come to think of it, they may have been drinking all night).  It was fun riding up to the city in a train full of costumed people! 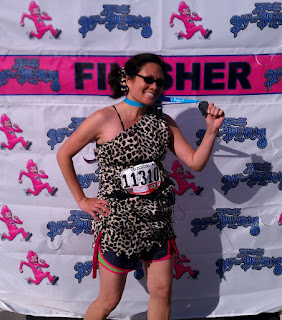 Like I said, turning 40 does seem to make people a bit crazy, and I'm just like everyone else.  Fortunately everyone around me at Bay to Breakers was just as crazy, so I fit right in.

Since I'm celebrating my 40th birthday, here's a list of 40 characters I saw at Bay to Breakers this year.  It's by no means a complete list; in fact, I've left out all the characters I mentioned in my 2011 Bay to Breakers post, as well as all the generic superheroes, men in dresses, men in hawaiian shirts and colorful outfits that appear every year -- but it's enough to give you a sense of the wild and wacky people that run this race. 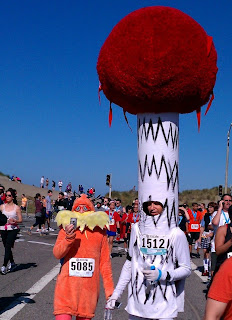 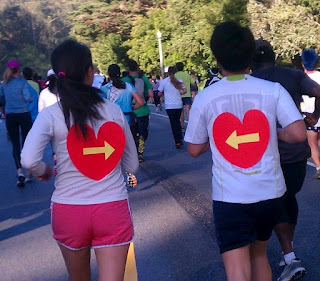 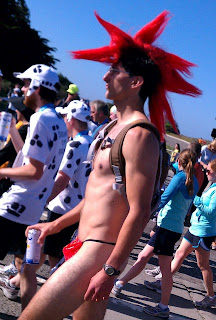 Housewives in curlers
Cavewoman (that would be me!)
Boys from Ipanema (in speedos with "Ipanema" printed on the butts)
Dalmatians
Chickens
Pandas
Lobsters
Shark

Bonus photo -- I know I said 40 characters, but since it wouldn't be Bay to Breakers without the naked guys, I had to include a Naked Guy for 2012: 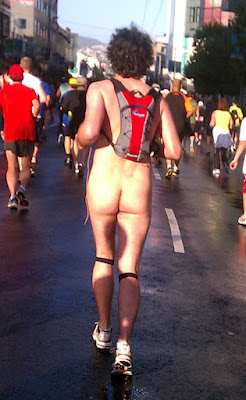 How fun! Congrats on your achievement!