100 Bottles of Beer, 100 Naked Men and other strange sights at Bay to Breakers

Bay to Breakers is as much a part of San Francisco as the Golden Gate Bridge, the Gay Pride Parade and Ghirardelli chocolates. This is my 6th (or is it 7th?) time to run it, and I was so happy I was able to participate in the 100th race. Despite all the health hiccups I encountered in preparing for it, I knew I'd manage to finish it somehow ( thanks to 3Po's amazing fortune-telling abilities) and I'm pretty happy with my finish time (I haven't checked my official time yet, but with my ultra-precise method of checking my phone at the start and finish lines, I clocked myself at about 1:21). Update: my official finish time was 1:21:31.

But Bay to Breakers isn't about about lap times or finish times; heck, it isn't even about the running. It's about the spirit of fun and festivity that surrounds you, and all the zanies you meet along the way.

To celebrate B2B's 100th year, here (in no particular order) are 100 of the wild and wacky characters I encountered while running the 100th Bay to Breakers:

1) Okay, let's get this one over with: Naked people. C'mon, you know that's what pops into your mind when you hear B2B. 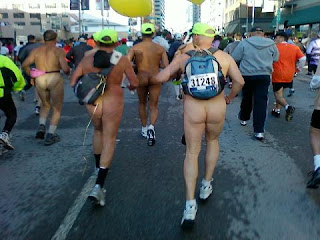 2) Crayons
3) A woman in a peacock samba outfit
4) Topless women
5) Catwoman
6) Superwoman
7) Salmon "swimming upstream" (running in the opposite direction, another B2B classic)
8) 100 Bottles of Beer on a Wall 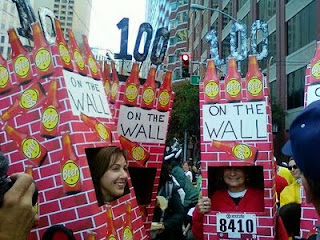 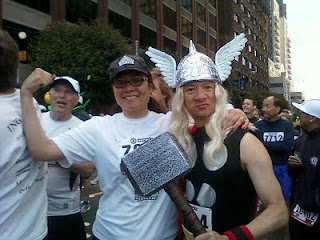 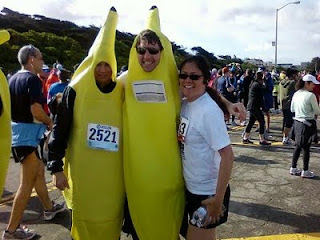 
Okay, I'll admit it. I've searched through my memory, and I could only come up with 40 that I remember seeing as I ran -- and I kind of cheated, because I don't actually remember seeing the Clone Troopers, I only saw them afterwards in a photo I took along the way. Also, the Smurfs weren't actually running when I saw them, they were on the sidelines. Hey, they could have jumped in, for all I know.

In defense of my memory, I was assigned to the first starting "wave" of 10,000 (out of 50,000 official participants plus who knows how many people without official race numbers), and I was surrounded by people who were actually running. Most of the wacky getups were partying at the back of the pack. The other sixty below are characters that Alfie and the kids saw as they watched from the sidelines: 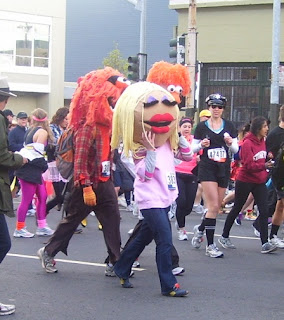 Okay, I know I said I'd get naked people over and done with at #1. But who would have thought there were so many ways to get naked? Hey, this is Bay to Breakers! 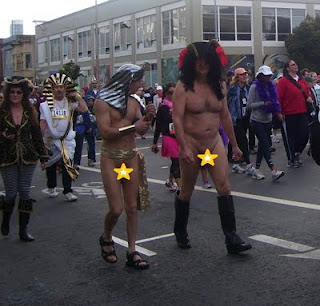 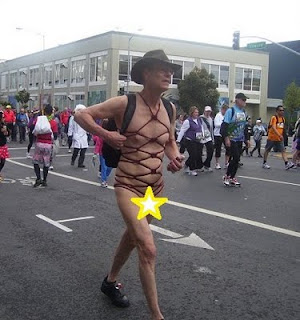 This list gives me all kinds of ideas and inspiration for next year's Bay to Breakers. I'm thinking body paint, peacock feathers and about a year's worth of workouts.....

I think for the Muppet you meant Janis or Janice

Thanks for recognizing us as "100 Bottles of Beer on the Wall"! The newspapers reported that we were protesting the race's ban on alcohol. What a great time!

Hi Cindy, thanks for your comment! Call me dense, but I didn't even think about your costumes as a form of protest, I just thought they were a clever way to commemorate the 100th race! Whether you meant to protest or not, I'm happy you were featured so prominently -- your costumes were great!