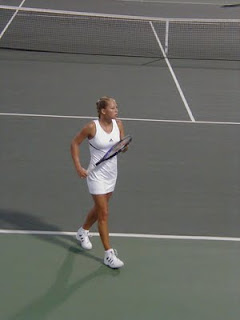 I know what you're thinking. What the hell does Anna Kournikova have to do with this week's Photo Hunters theme, digital? This happens to be one of the first photos I (or Alfie, I forget who) ever took with a digital camera. This was in July of 2000, and we saw Anna Kournikova compete in the Stanford Bank of the West Classic (she lost). We had just bought a digital camera and were playing with it like little kids. I remember Alfie (or I, I forget who -- no, actually it was Alfie) accidentally erasing all the photos we had taken during a weekend in Santa Cruz because we (no, he) didn't realize the command was "delete all" instead of "delete". I can't remember anything about the photos that were deleted, only that they were the best photos ever. We've never made that same mistake again.

The photo above is 198 kb; at the time we thought it was monstrously large. I don't think they even make digital cameras that shoot photos less than half a megabyte these days. When I look back to those days of film cameras, of developing your photos (and throwing half of them away), of keeping track of the negatives, I'm so glad we have digital film technology today! 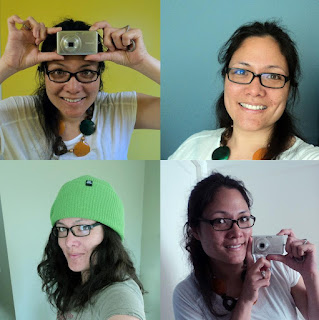 Here's a collage of me posing with my current point-and-shoot camera, a Sony Cybershot.

This post and photos were inspired by the Photo Hunt theme of the week: Digital. Feel free to leave links to your own Photo Hunt entries below.
posted on Saturday, May 07, 2011 Labels: Photo Hunt
Email ThisBlogThis!Share to TwitterShare to FacebookShare to Pinterest

The digital camera evolves so fast and much these days, doesn't it? I bought my current camera some three years ago -- love it (still) but can imagine that many people consider it out of date now! ;O