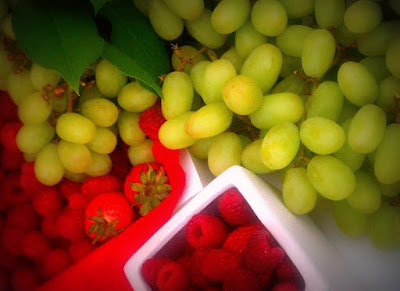 I love going to blog events, but I can't help but spare a guilty thought for the family I leave behind.  I get to fly somewhere nice, eat great food, meet great people and learn interesting things, while Alfie has to be a single parent, juggling work and afterschool schedules, and the kids have to eat the so-so-school lunch and get farmed off to playdates whether they like it or not.  Having just arrived from a great two days of food at fun at the McDonald's Taste of Summer Event, the least I could do was cook a kickass-awesome meal for them.


Since they've been living on pasta, hamburgers and pizza for the past 2 days, I wanted something fresh, light and meat-free.  The Currant, Cilantro & Almond Barley I had at McDonald's Taste of Summer dinner fit the bill perfectly.  I topped it with asparagus spears boiled for about 3 minutes and paired it with the Summer Watermelon Salad we had at the same dinner.  It was the perfect gourmet vegetarian meal! I was a bit worried that my kids would turn their noses up at this dish, but they loved it.  It's definitely a keeper, and I wanted to share it with everyone:

this is a photo of the dish we enjoyed at the McDonald's event
photo credit: @pattiecordova via Instagram


Method:
Heat the liquids in a stock pot with the oil on the stove top and bring to a boil.
Turn off the heat, add the barley and cover with a lid and keep over low heat until barley is cooked through.
Remove the lid and fluff the barley with a fork.
Add the peppers, currants, cherries, almonds & seasoning, then mix thoroughly.


This dish can be served warm or as a cool refreshing side as well.


Now that I've tantalized you, I must come clean and admit that I didn't quite make the exact same dish. I had to make a few substitutions:

* Instead of barley, I used the Harvest Grains blend from Trader Joe's, which is a mix of Israeli-style couscous, orzo, baby garbanzo beans, and red quinoa.  The texture was smoother, "pearlier"and less nutty than the barley.

* Instead of the dried currants and sliced cherries, I used dried cherries.

* Instead of the roasted red bell pepper, I used chopped fresh yellow pepper.  I would have used the original ingredient, but it took me four whole burnt red bell peppers for me to admit that I don't know how to roast a pepper.

* Instead of fresh cilantro, I used a Knorr cilantro cube. This is the substitution I most regret having to make, because really, nothing beats fresh cilantro.

this is a photo of the dish my family wolfed down last night.

There, full disclosure.  The original, with its complex and surprising blend of flavors, is definitely better, but even with these substitutions you'll end up with the delicious dish pictured above.

Disclaimer: I attended McDonald's Flavors of Summer event as a guest, with McDonald's providing travel and accomodation. I was not asked to blog about this dish or the event. The views and opinions expressed here are my own.

posted on Friday, May 04, 2012 Labels: food, recipes, summer
Email ThisBlogThis!Share to TwitterShare to FacebookShare to Pinterest