How to get chosen for Disneyland's Jedi Training Academy (*Note:  One of the things I love blogging about the most is travel. Whenever I come home from a vacation, I'm always full of grand plans to blog about our awesome experiences... and then procrastination gets in the way.  This year I want to do a better job at writing about the places and things we've enjoyed during our travels. Whether they occurred halfway around the globe or right in our neighborhood, whether we experienced them a month ago or a decade ago, they are precious memories to me and deserve to be recorded. Hopefully, posting under a catchy-sounding meme like Travel Tuesday will motivate me to be more consistent about it).

The Jedi Training Academy is an interactive show that takes place at Walt Disney World's Magic Kingdom (at the ABC Sound Studio in Hollywood Studios) and at Disneyland Resort's Disneyland Park (at the Tomorrowland Terrace Stage in Tomorrowland). If your child is a Star Wars fan, this is a Must-Do, because if your child is selected to participate, he or she gets to learn some Jedi moves, and gets to battle a Star Wars villain!

The show is about 20-30 minutes long, and multiple shows run each day (check the day's entertainment schedule for exact times). About 20-30 children ages 4-12 are selected to participate in the show, and the selection process is different for each park.  At Walt Disney World, participants must sign up for a spot, and at Disneyland, participants are randomly selected from the children in the audience.  Obviously there are many more viewers than participants, and the strategies for getting selected are completely different for each park. Here are some tips I've gathered to increase your child's chances of selection:

Tips for getting selected for Jedi Training Academy at Walt Disney World
Getting selected at Walt Disney World is just a matter of first come, first served, so the early bird gets the worm (or in this case, the ticket).
1) Sign up as soon as you enter the park.
2) Make sure your kids are with you when you sign up (no child, no spot).
3) Arrive early to your assigned show.

Tips for getting selected for Jedi Training Academy at Disneyland
Getting selected at Disneyland is a bit trickier, since selection is random, but there are a few things your child can do to stand out in the crowd and get noticed.  At our last visit to Disneyland, 3Po and Jammy followed all of the tips below, and they were one of the first ones picked!

1)  Get there early.  If you can nab a spot near the front, it will be easier for the Jedi Master to see your child. Yes, I have seen kids in the back of the crowd and on the sides get picked... but proper product placement can't hurt, right?  And you want a good spot anyway, so you can take photos of your child up on stage!

2)  Make a sign. 3Po drew Yoda's face on his sign and wrote Pick Me, You Shall.  Jammy's sign read:  Future Jedi Academy Student, with an arrow pointing to him. They made their signs at the hotel and I rolled them up into my purse, but even a hastily scrawled sign will do (I've heard Disney doesn't let you bring huge signs into the park anyway).  Other great ideas for signs include Teach me the ways of the Force, The Force is strong in this one, I'm Luke Skywalker's long-lost triplet, and Yoda was my preschool teacher.  Be creative! 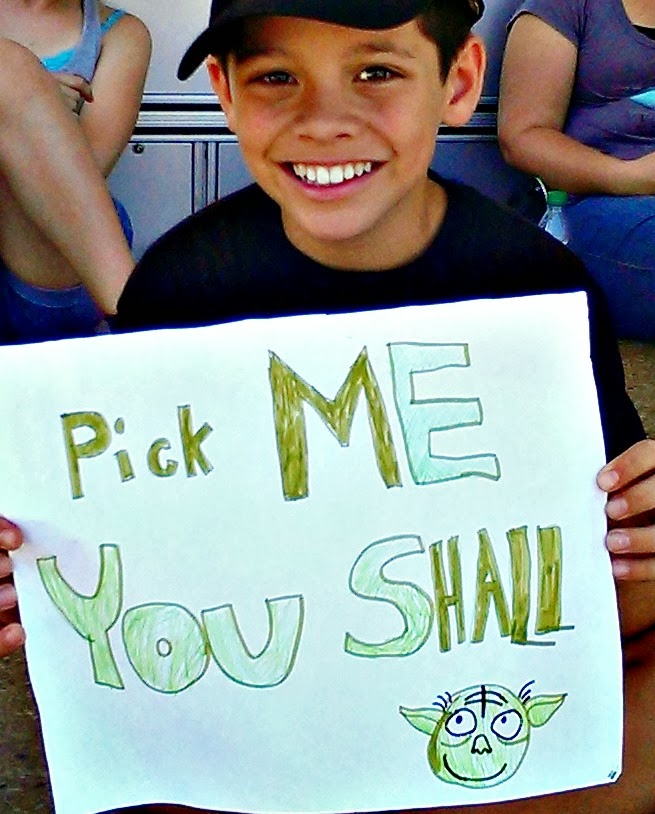 4) Be enthusiastic.  Tell your child to jump up and down, wave their arms,  yell, "Pick Me!  Pick Me!".  I was so happy (and relieved) when the Jedi Master pointed straight to 3Po, then to Jammy!  They picked a good mix of ages; the bulk seemed to be between 6 and 8, and 3Po and Jammy (age 9) were definitely on the tall side, but there were at least 2 or 3 who looked about 11 or 12. 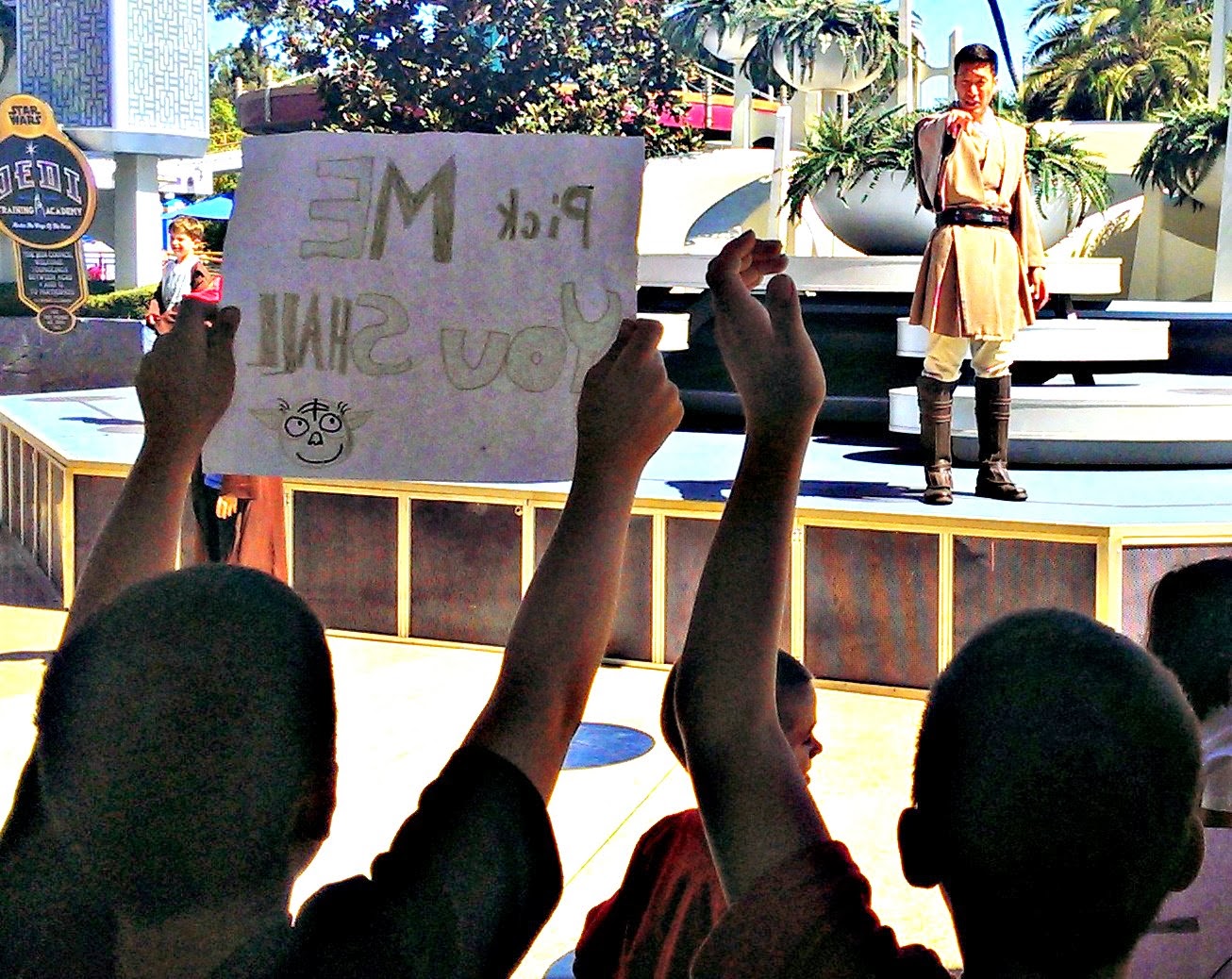 Once your child is picked,  the fun begins!  A few more Jedis join the Jedi Master, and give the participants (I guess I should call them padawans at this point!) robes and lightsabers.  The padawans are then ushered onto the stage or in front of the stage.  The padawans are given large dots to stand on so they are evenly spaced and don't bump into each other. The Jedi Master begins to train the padawans in the ways of the Force, teaching them a sequence of duck, slash and parry moves.  The look of concentration on each padawan's face is adorable! As the padawans practice their moves, the Jedi Master senses a disturbance in the Force. Sure enough, the familiar Darth Vader music begins to play, and two Stormtroopers enter, along with not one, but two Dark Lords: Darth Maul, and Darth Vader himself! 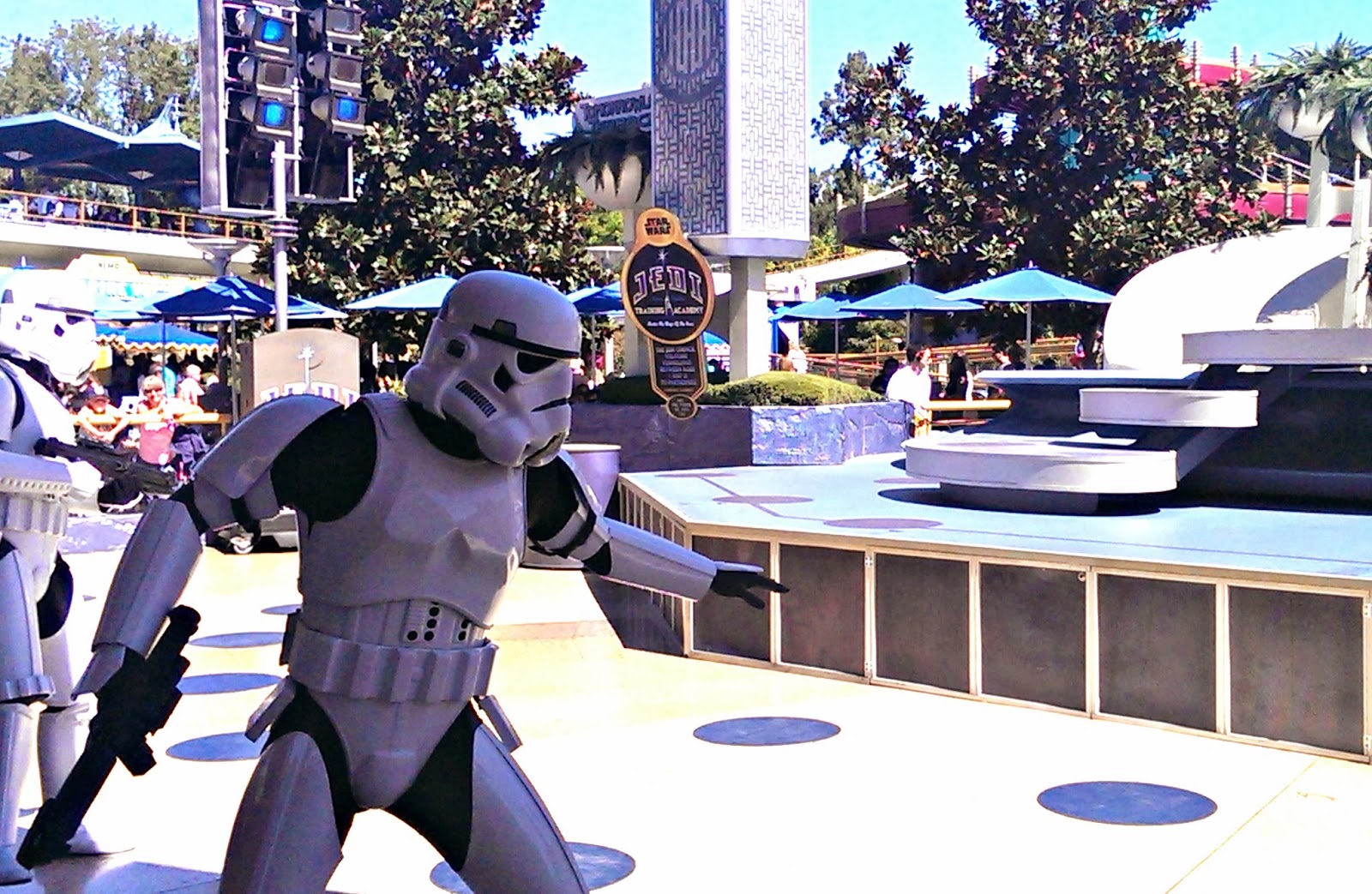 The Jedi Master and his fellow Jedi Knights usher the padawans over to one side, as Darth Vader commands everyone to join him and turn to the Dark Side.  The Jedi Master tells Vader to prepare for battle, as they will never turn to the Dark Side.  Each padawan then gets a turn fighting either Darth Maul or Darth Vader -- the older kids get to fight Darth Maul, and the younger kids get to fight Darth Vader, using the sequence they learned earlier.   One Jedi Knight stays beside each battle to coach the fighting padawan, and the rest of the Jedi Knights keep everything flowing smoothly (sending each padawan to battle when it's their turn, keeping the rest of them in line). 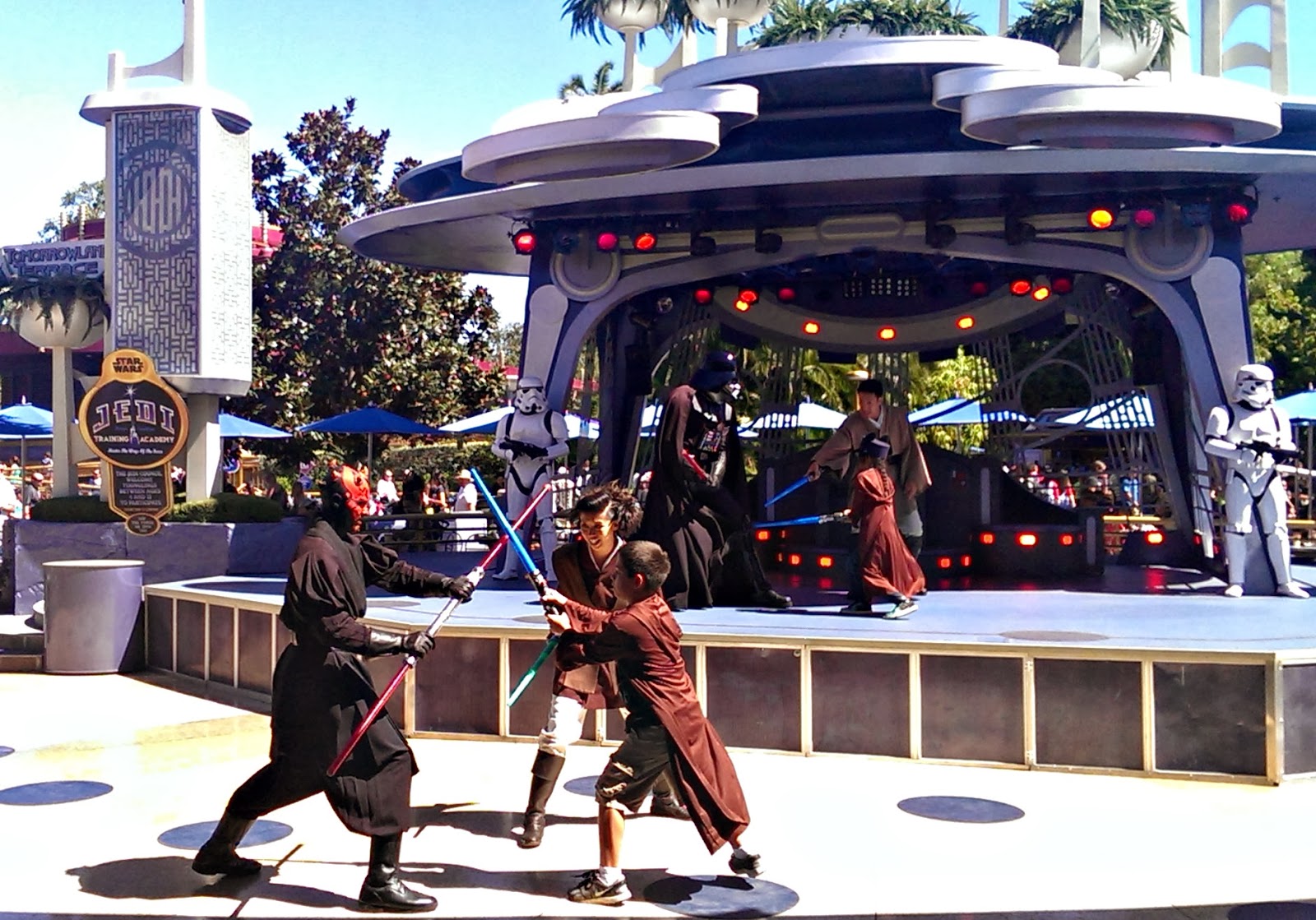 Once everyone is done fighting, the Jedi Master gathers the entire academy together for one last show of defiance. 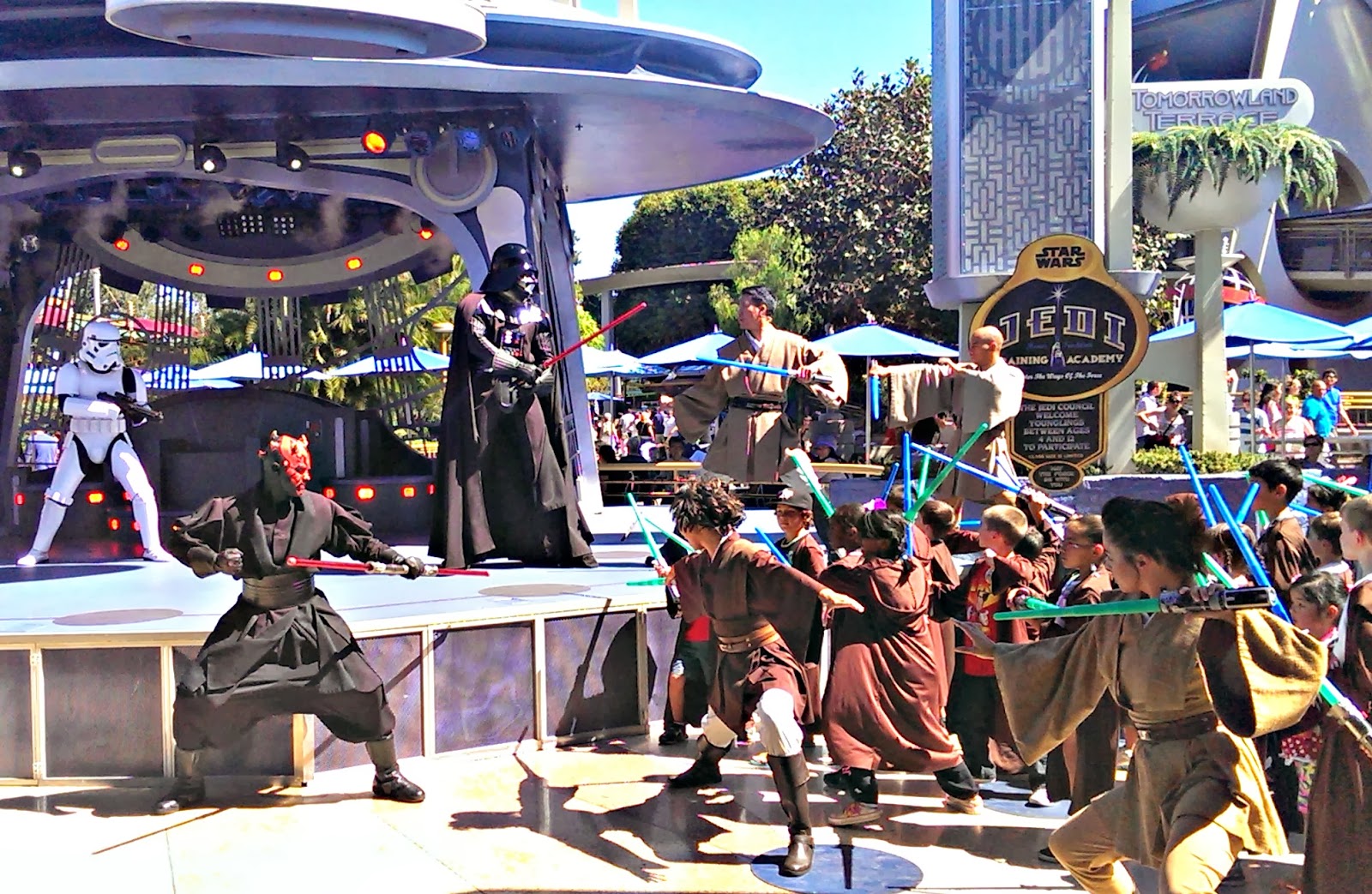 Darth Vader and Darth Maul realize they cannot defeat the entire Jedi Academy, so they make their escape!  The Jedi Academy padawans have saved the day!  Cue the applause! 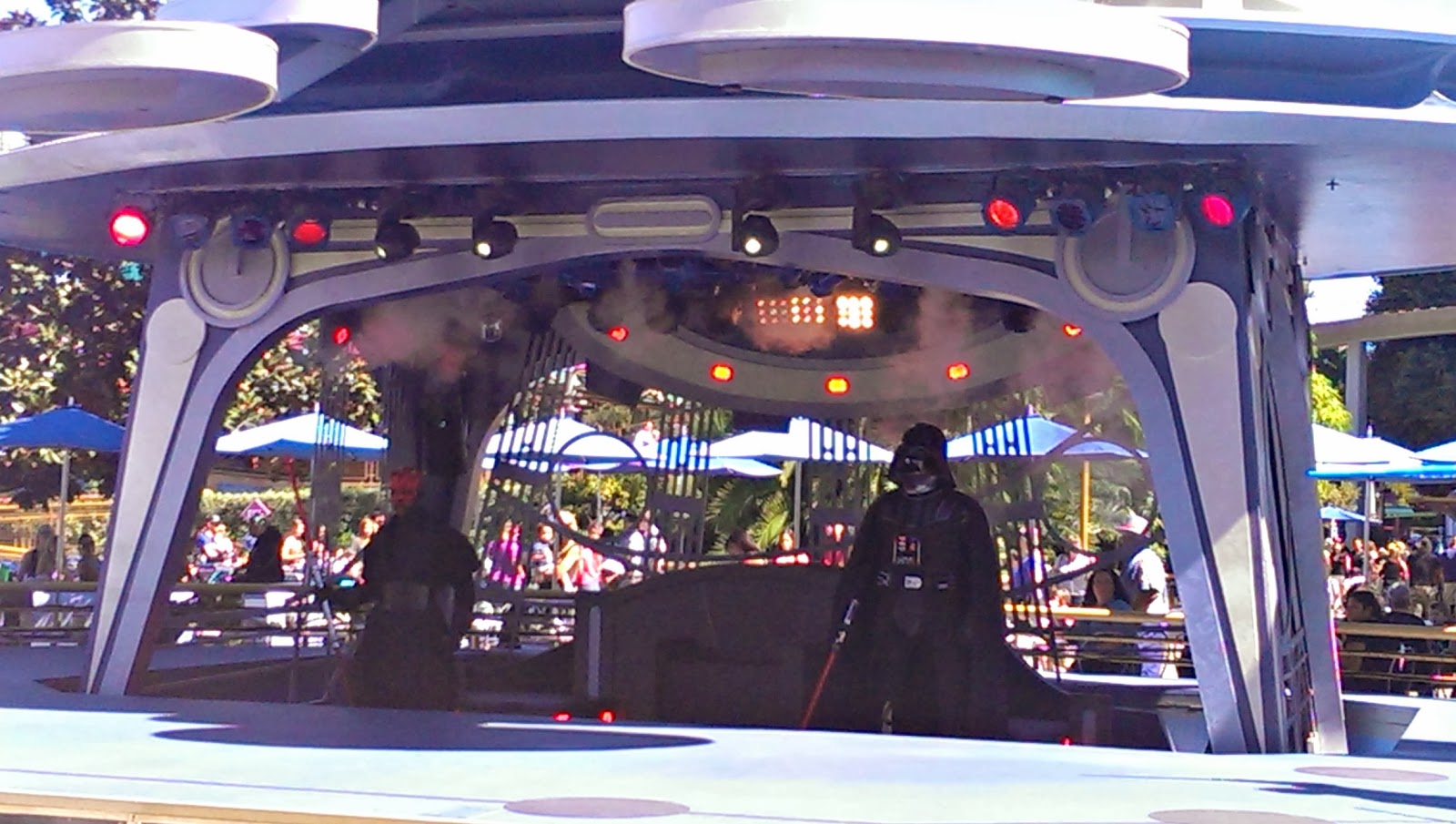 After this display of courage, the Jedi Master calls all the padawans up on stage and proclaims them to be full-fledged padawans.  The padawans repeat the sacred Jedi oath out loud, and each one is given a certificate. 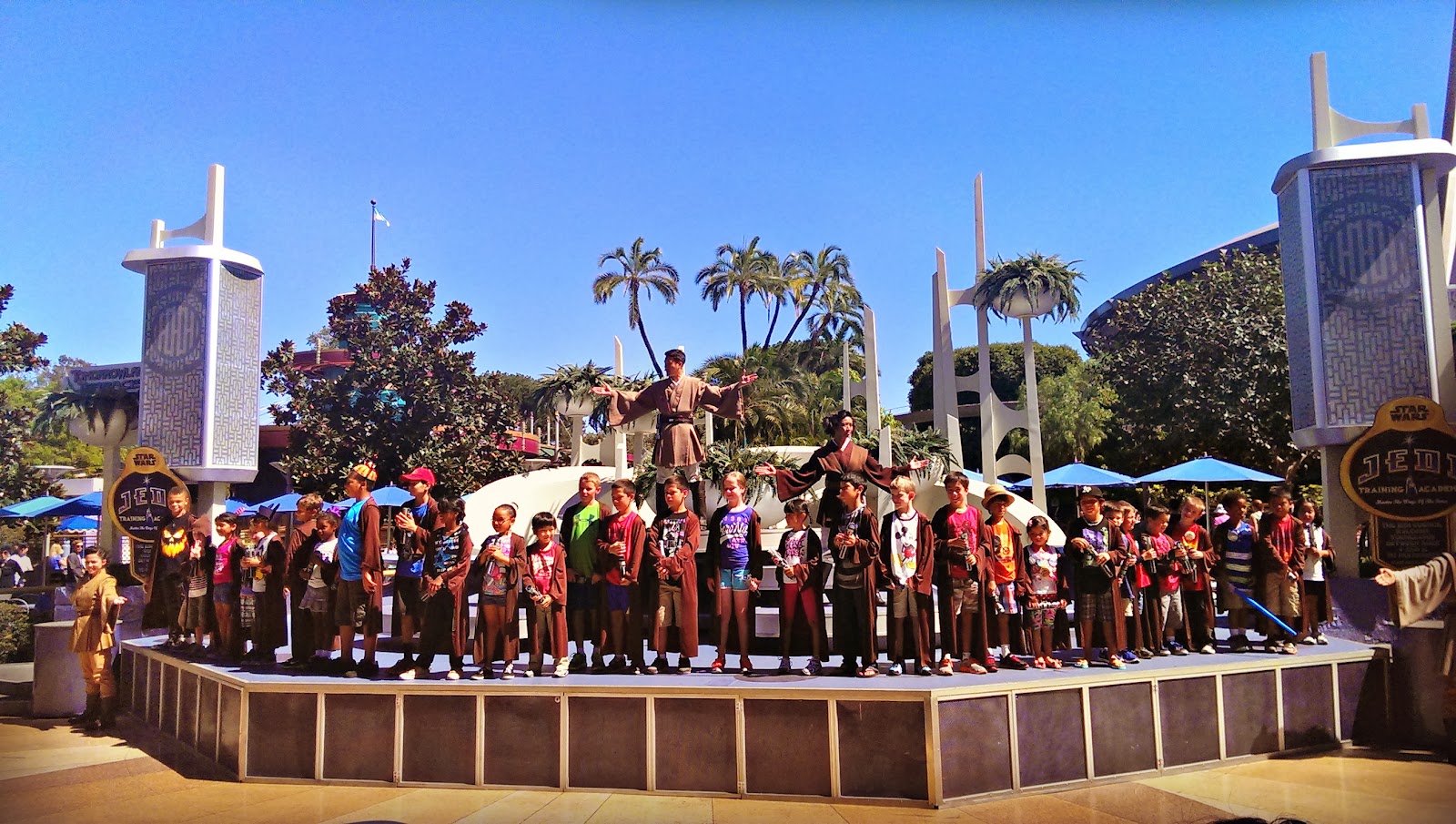 With that, the show ends.  The padawans return the robes and lightsabers, and walk back out into the parks with their heads held high and smiles a mile wide. 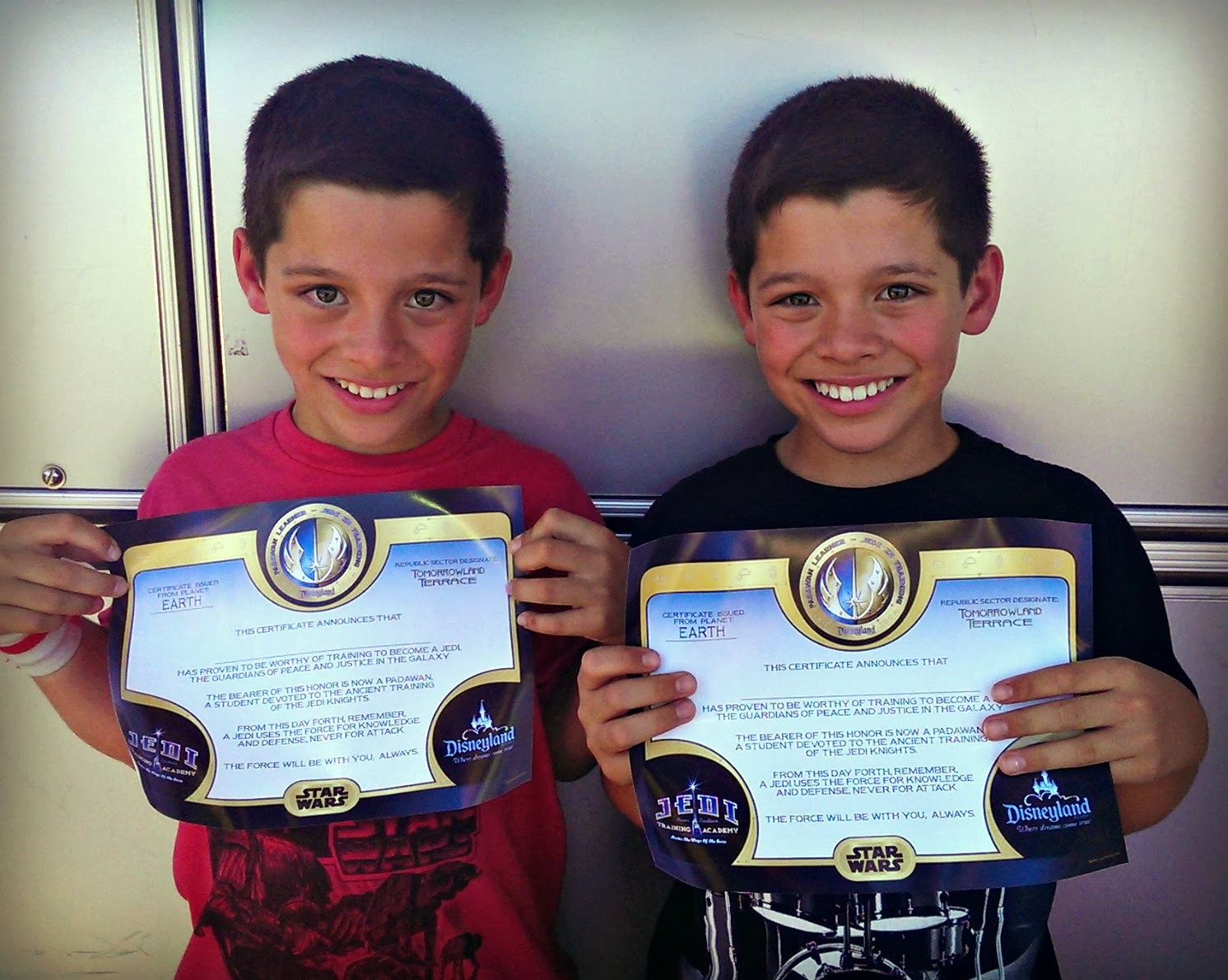 Jedi Training Academy is surely one of the best experiences a young Star Wars fan can have. It's so much fun that if your child is not chosen the first time, I recommend trying and trying again and again until he or she does get chosen. Hopefully the tips above will give the edge you need.  Good luck, and May the Force Be With You!