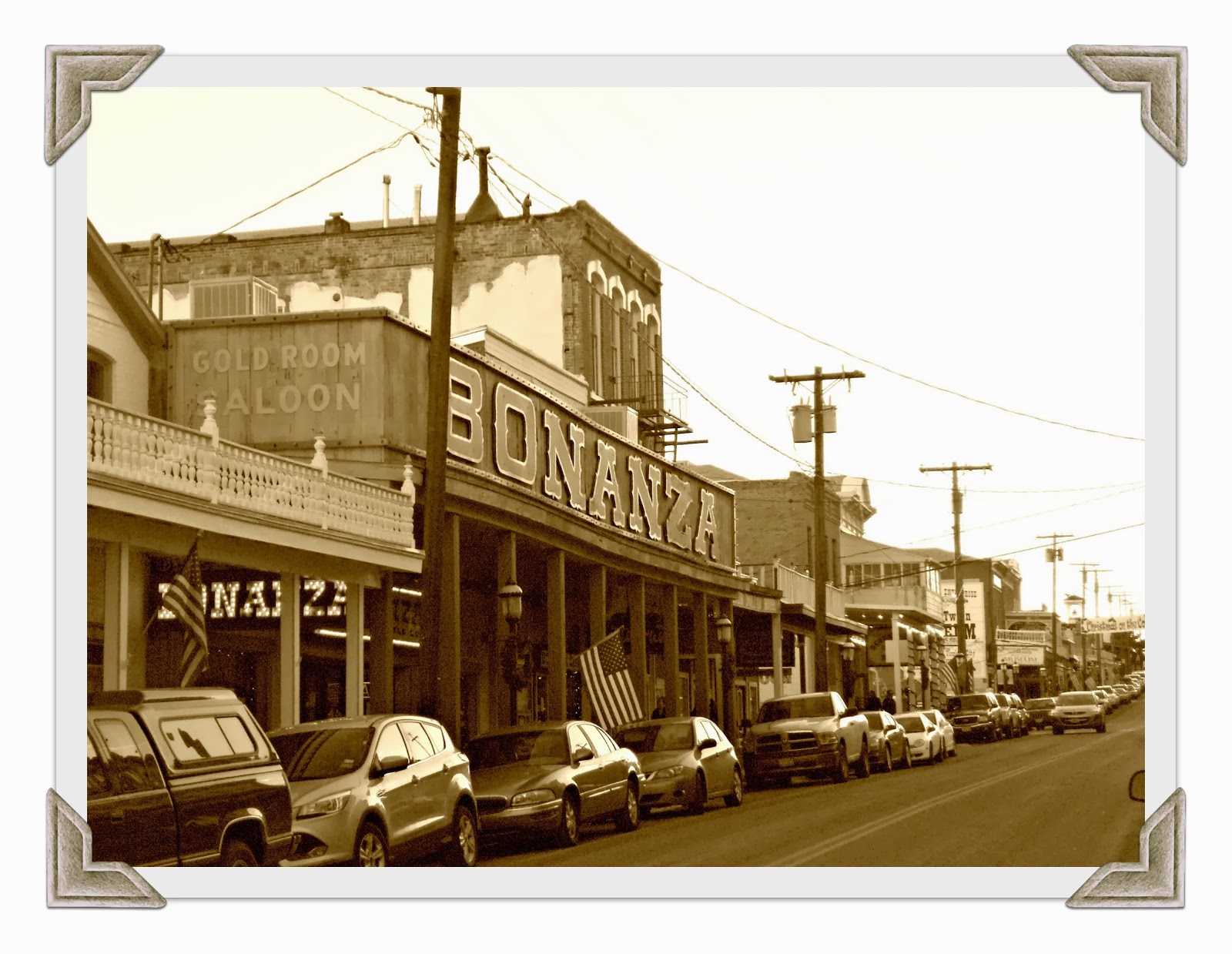 How's this for a real Throwback Thursday? Virginia City was a mining boomtown that sprang up in the late 1800's with the discovery of the Comstock Silver Lode.  It's also one of the most interesting places we visited over the winter break.  Virginia City is just 30 minutes from Reno, yet in all the years we've been traveling to Reno and Tahoe area, we've never been there till now.  I vaguely knew Virginia City existed, but didn't realize what a quaint, entertaining day trip it can be. We thought we'd spend an hour or two in Virginia City; we ended up spending five -- and that's with most of the attractions closed for the winter!  Here's an overview of Virginia City and how we spent our day: 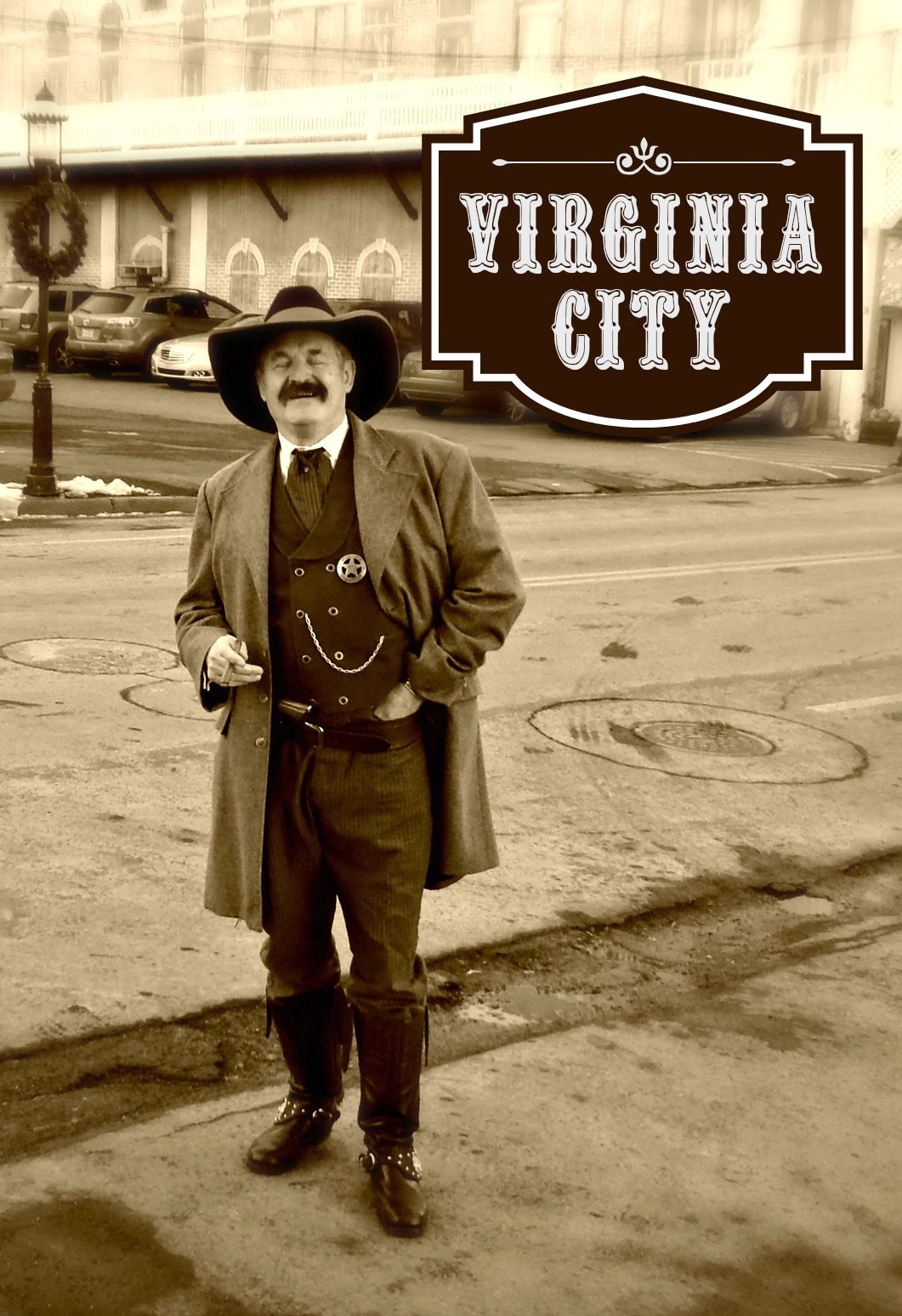 Visiting Virginia City is like stepping back in time to the Gold Rush era.   Main Street looks just like it might have been when writer Samuel Clemens lived there, and decided to adopt the pen name Mark Twain.  You'll probably see a few costumed characters roaming the streets, like this gentleman who kindly agreed to pose for a photo.  There are saloons all over main street, as well as penny candy shops, leather shops, and bars. 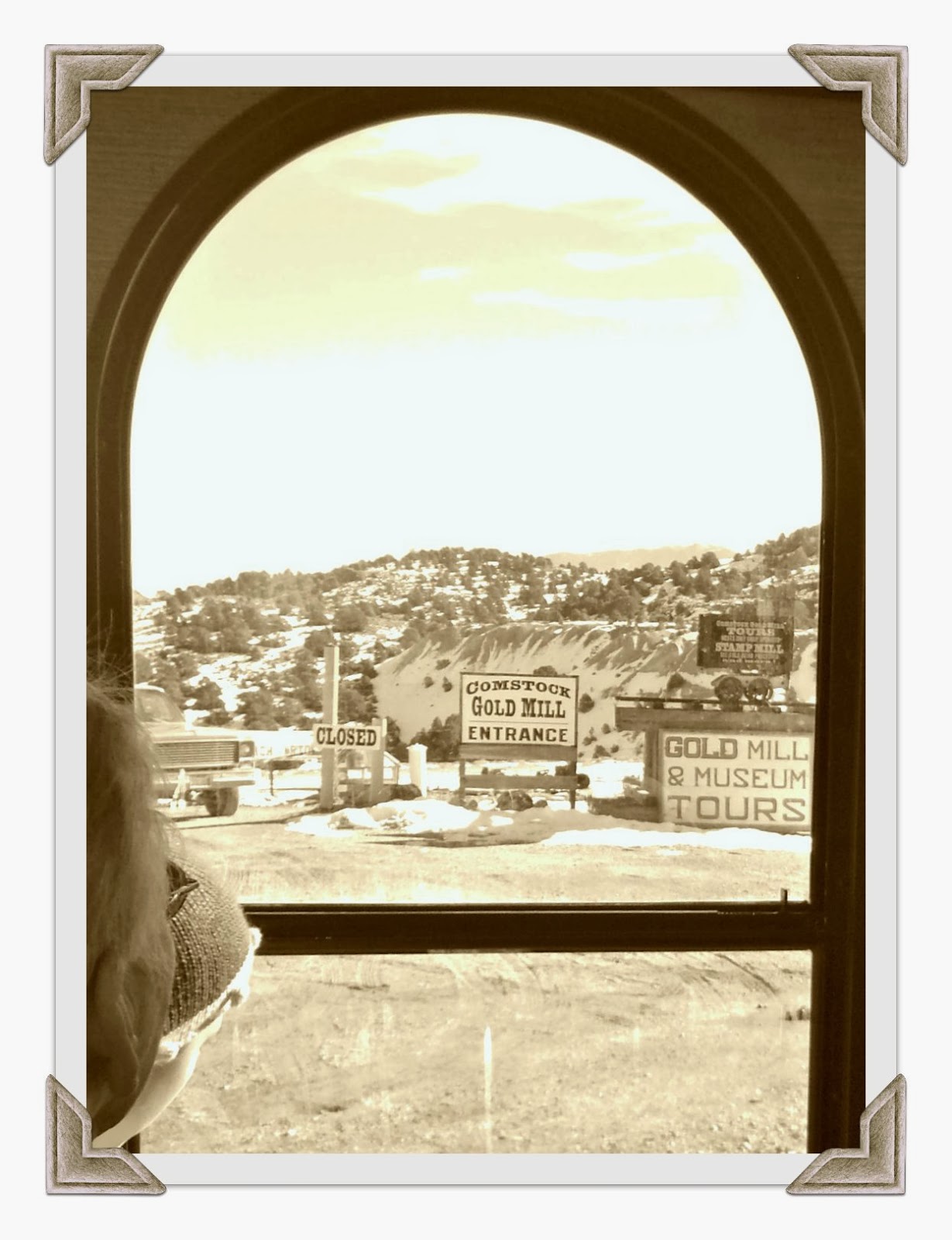 The Virginia City Trolley Tour is a great way to get an overview and history of the place.  It lasts just 20 minutes and costs just $5, so it's worth your while.  How else would you find out that George Hearst, the father of William Randolph Hearst, first made his fortune in Virginia City?  Or that Julia Bulette, the most famous prostitute from Nevada's Silver Rush era (she charged $1000 per night!), was made an honorary firefighter by her adoring firemen fans? 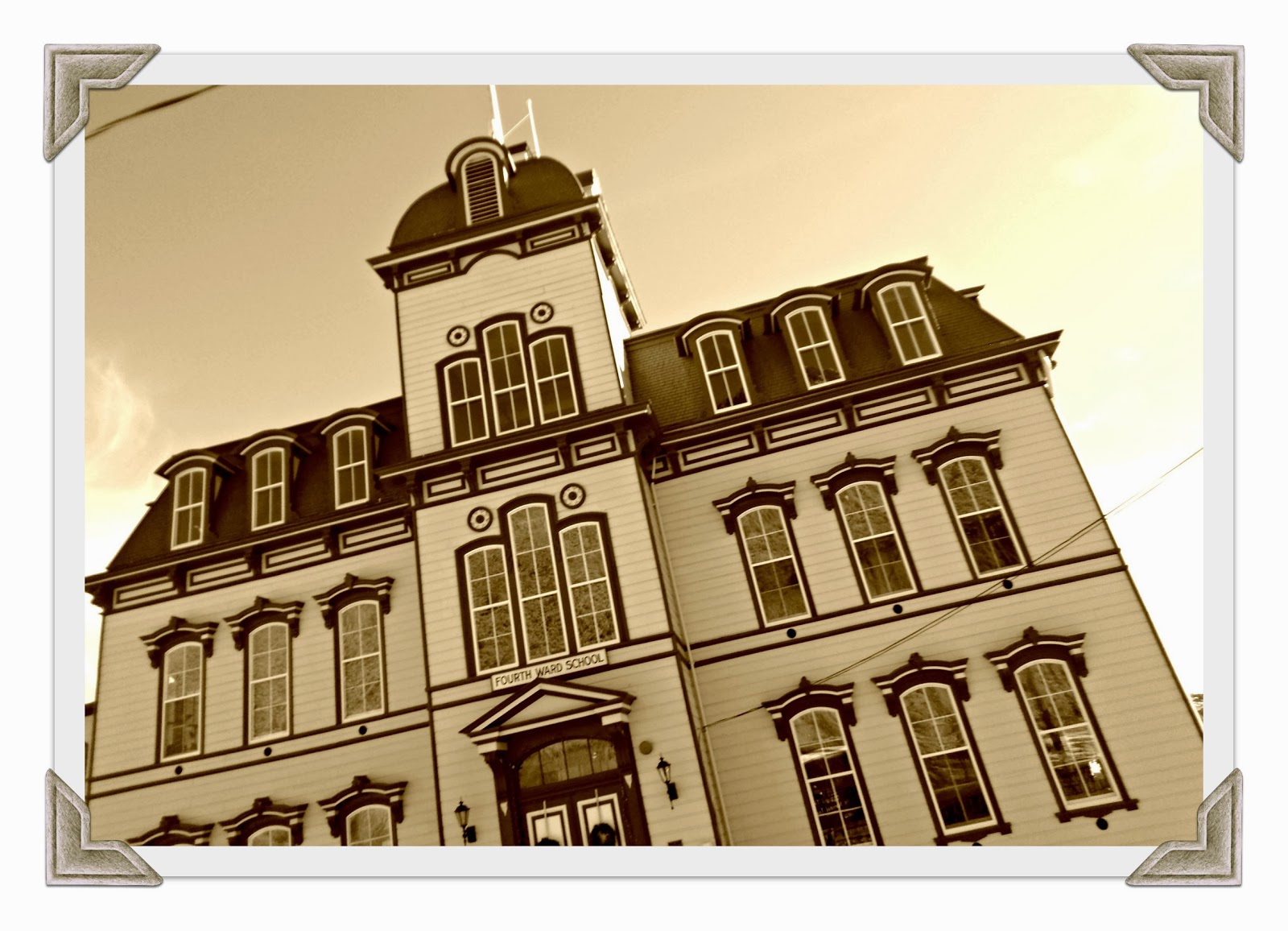 Other buildings you'll see on the trolley tour include the schoolhouse, opera house, and train depot. 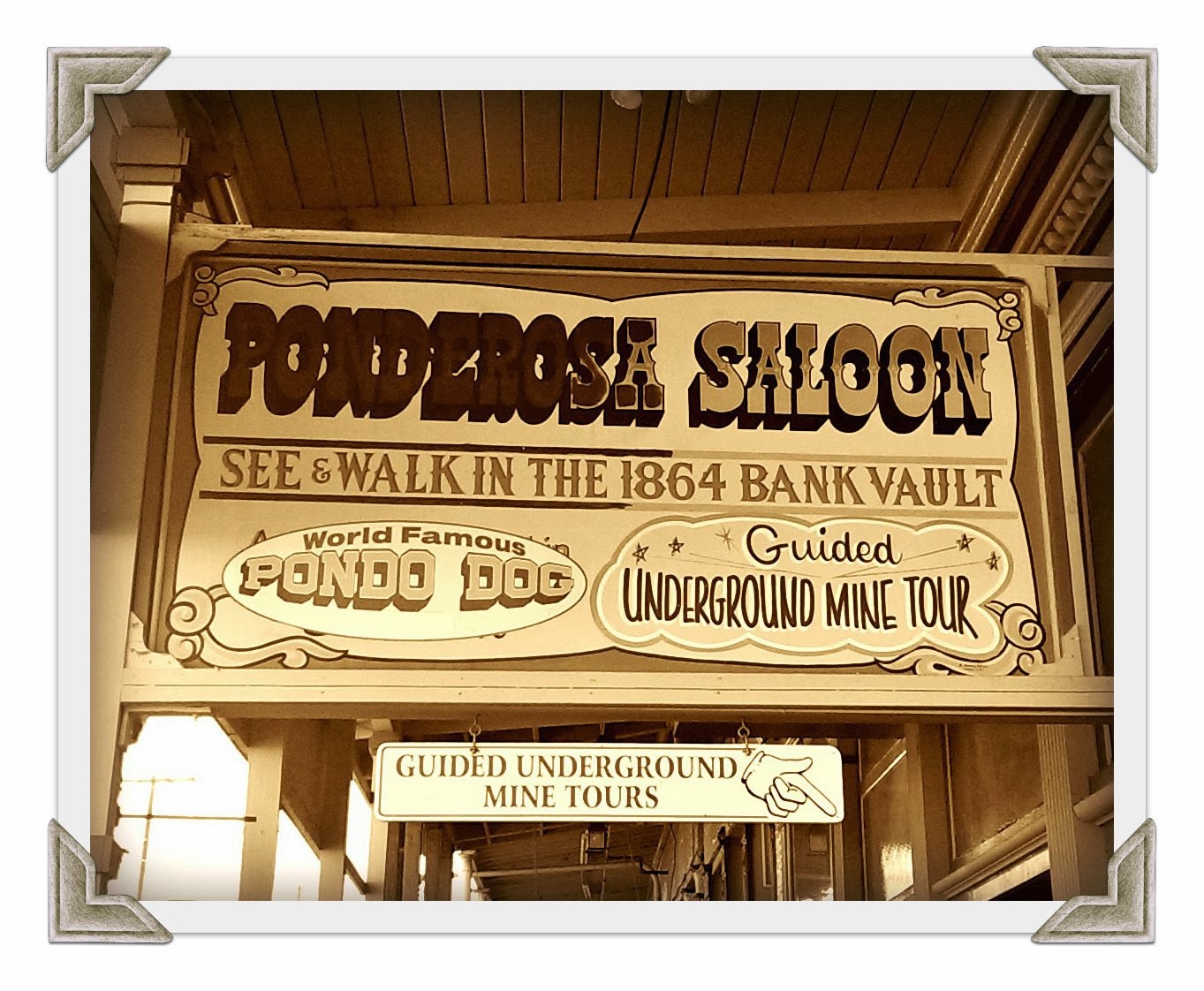 Virginia City has several mine shafts open for tours, but only one is open in the winter.  The entrance is located at the back of the Ponderosa Saloon (the Saloon backs up into the mountainside). 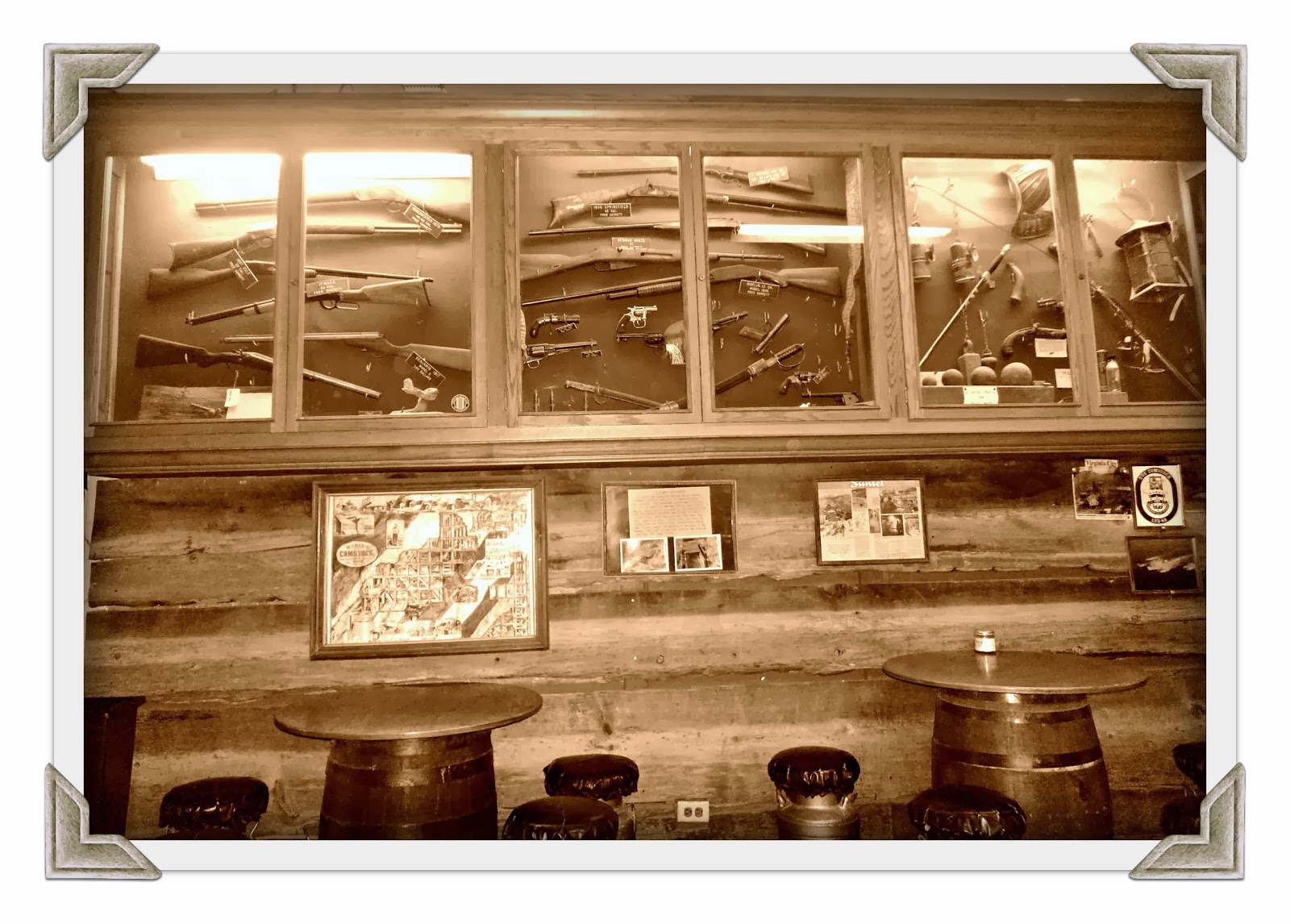 The inside of the Ponderosa Saloon is pretty cool; they have old mining artifacts, gems and artillery displays, as well as a huge walk-in bank vault that old stagecoach bandits would have loved to rob. 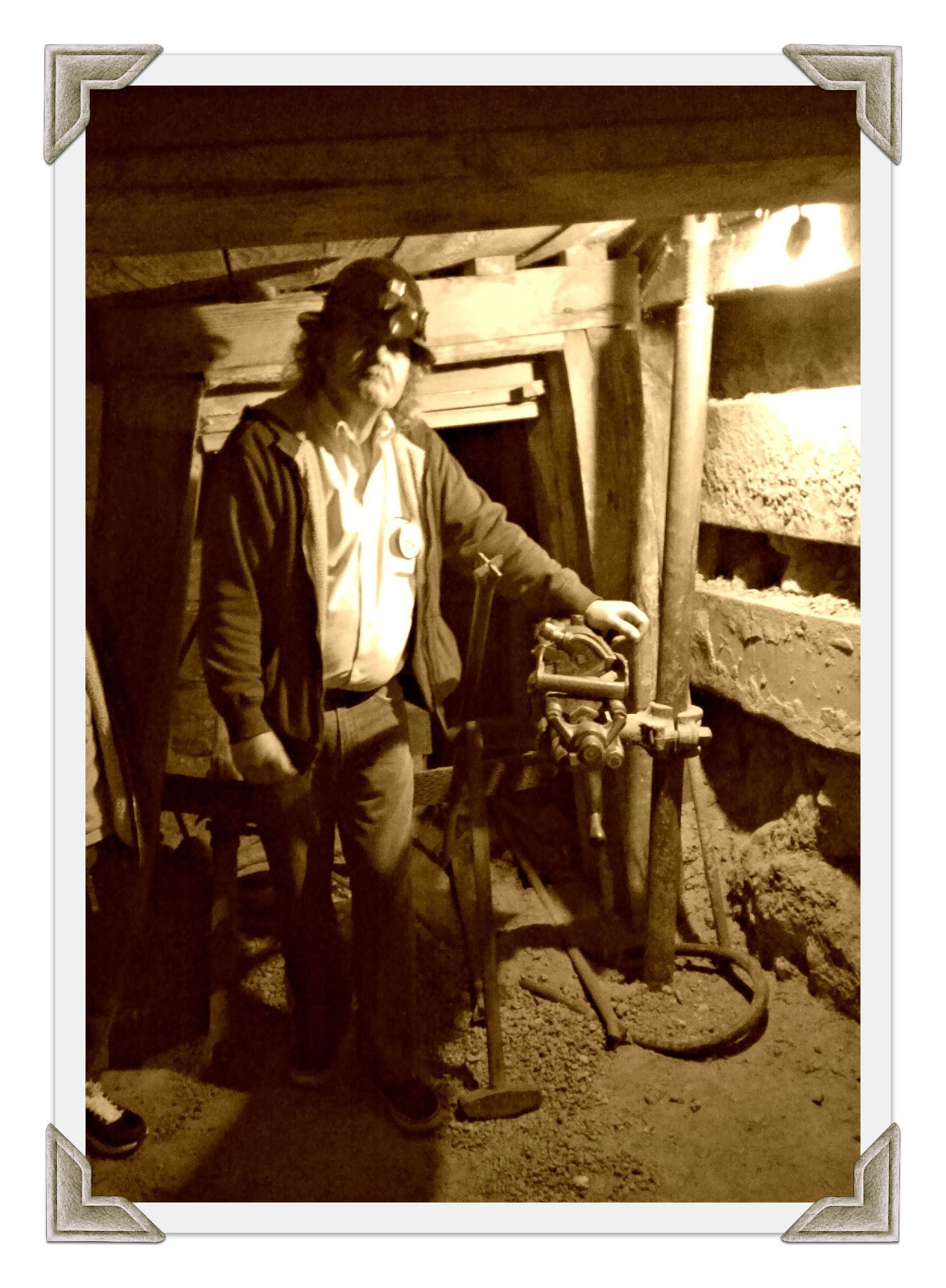 The tour only lasts 20 minutes but you get a real feel for the horrible conditions that the miners worked in.  Our tour guide (who looked like he would have fit right in with the 18th century miners) could barely walk through the tunnels without bumping his head, and he told us that the ceilings were actually about a foot lower (when the mine shaft was opened up to tourists, they lowered the floors for safety reasons!). 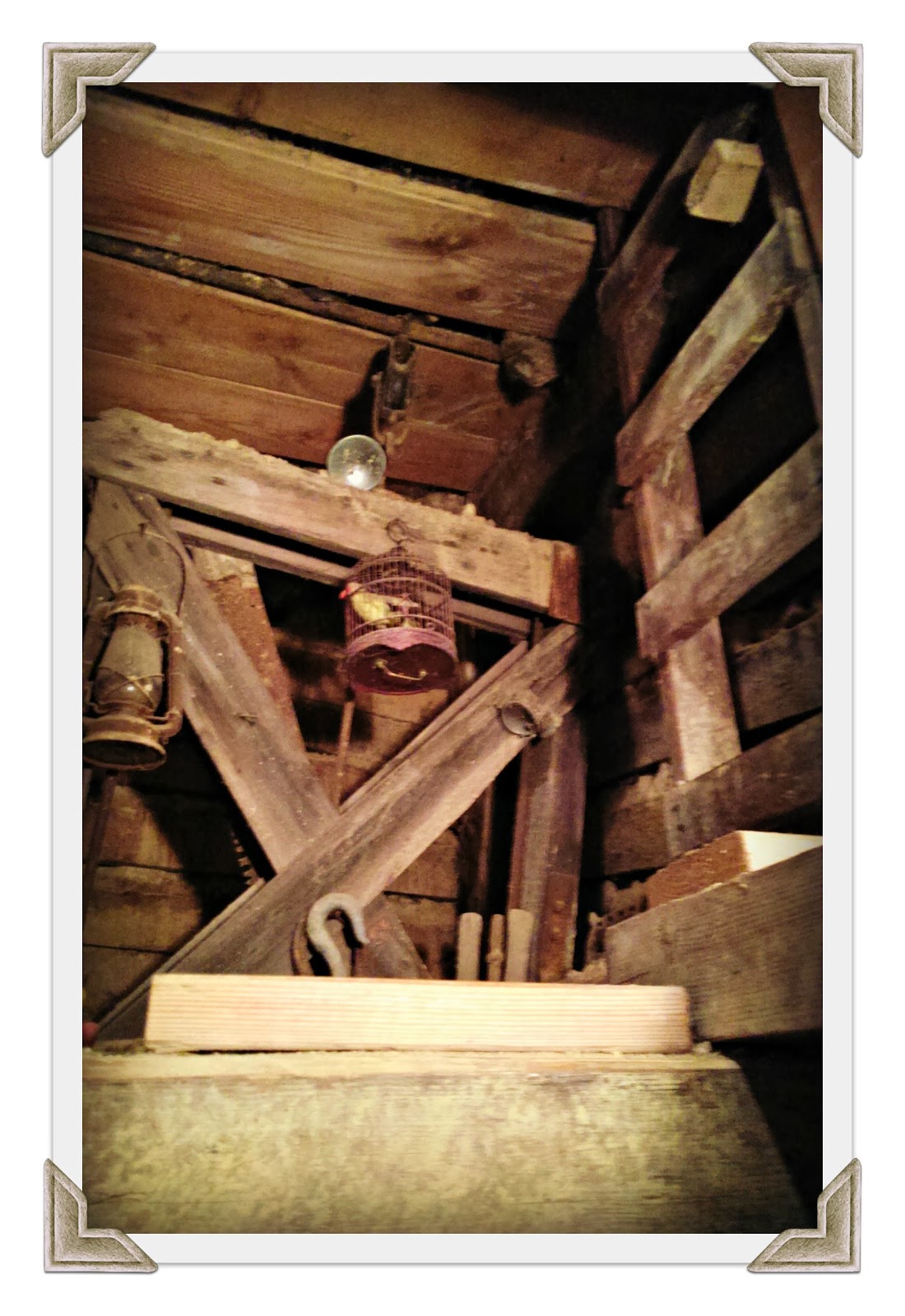 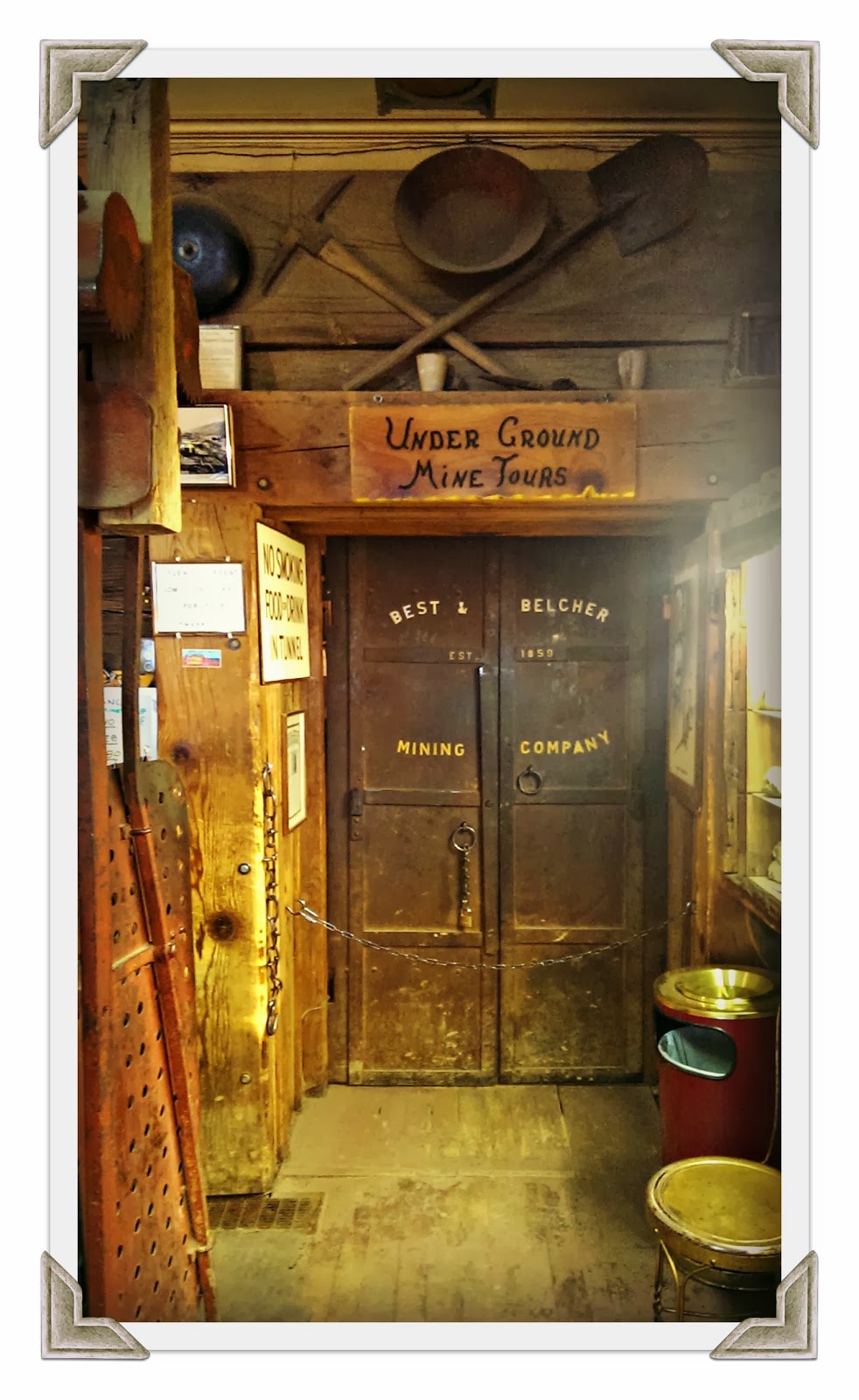 I thought it would be fun to apply a sepia filter to all of the photos in this post -- but I didn't need to do it for the two photos above.  No Photoshop treatments were needed to achieve that vintage look! 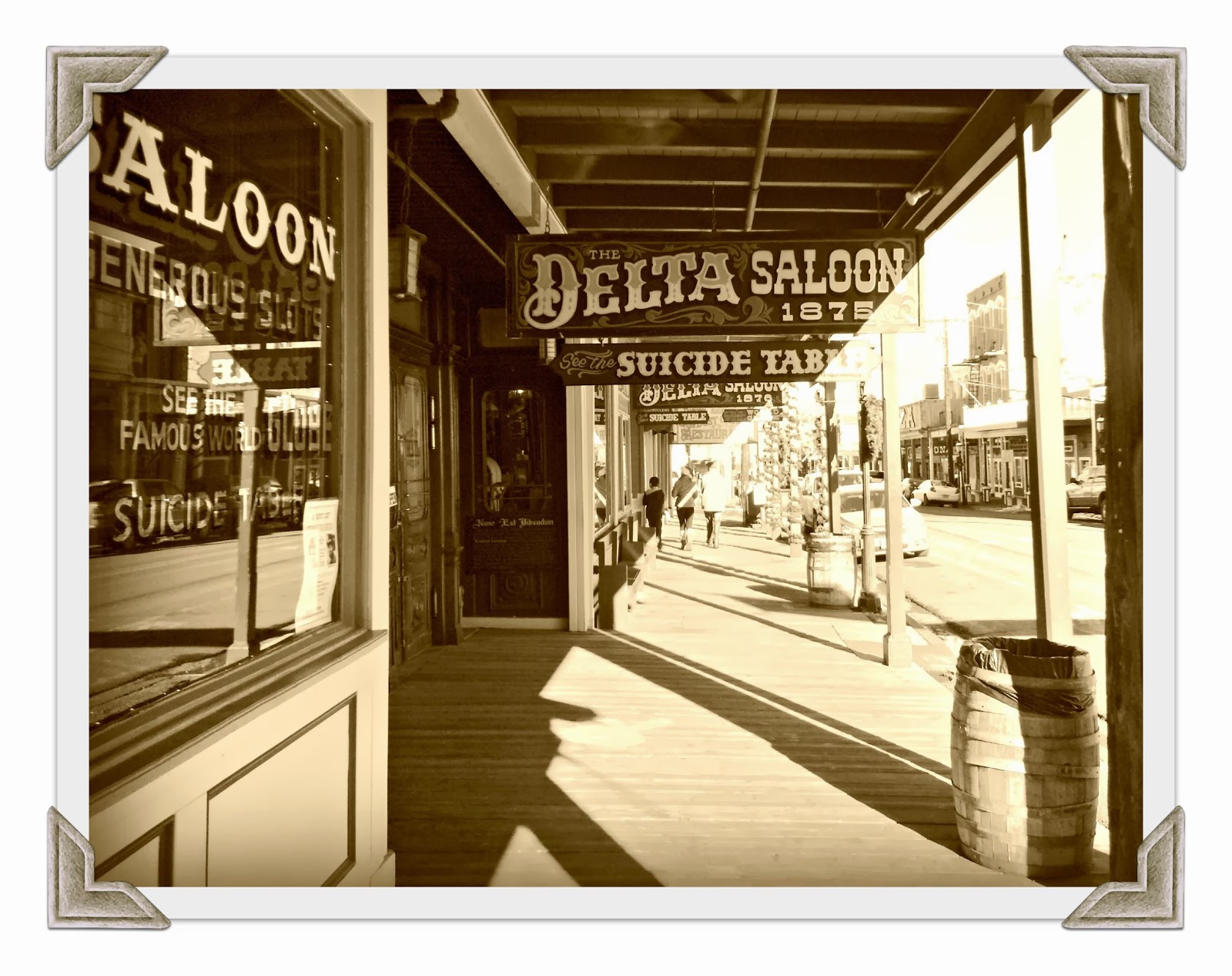 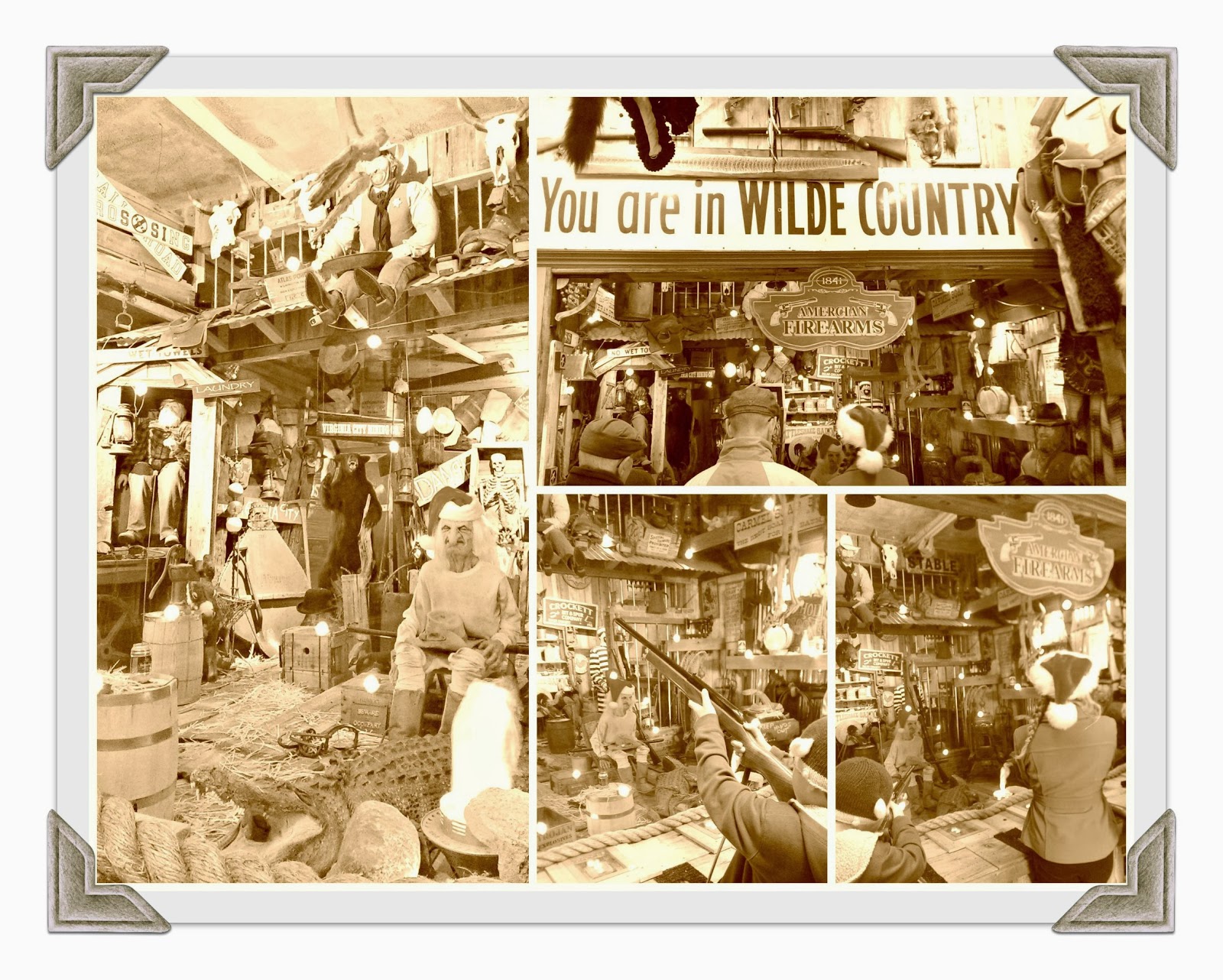 The kids loved this not-so-old-fashioned Shooting Range.  It's set up to fit in with the rest of the town, but you use laser guns instead of cork pellets. When you hit a target, it triggers a fun animatronic sequence (i.e. a cat runs off, an old miner rocks in his chair, a frying pan falls off its hook, a bear growls, etc...).  I was surprised to discover what sharpshooters the men in my family are: 3Po hit 19 out of 20 targets, and Alfie hit 25 out of 25!  No wonder they consistently beat me at Buzz Lightyear's Astro Blasters in Disneyland. 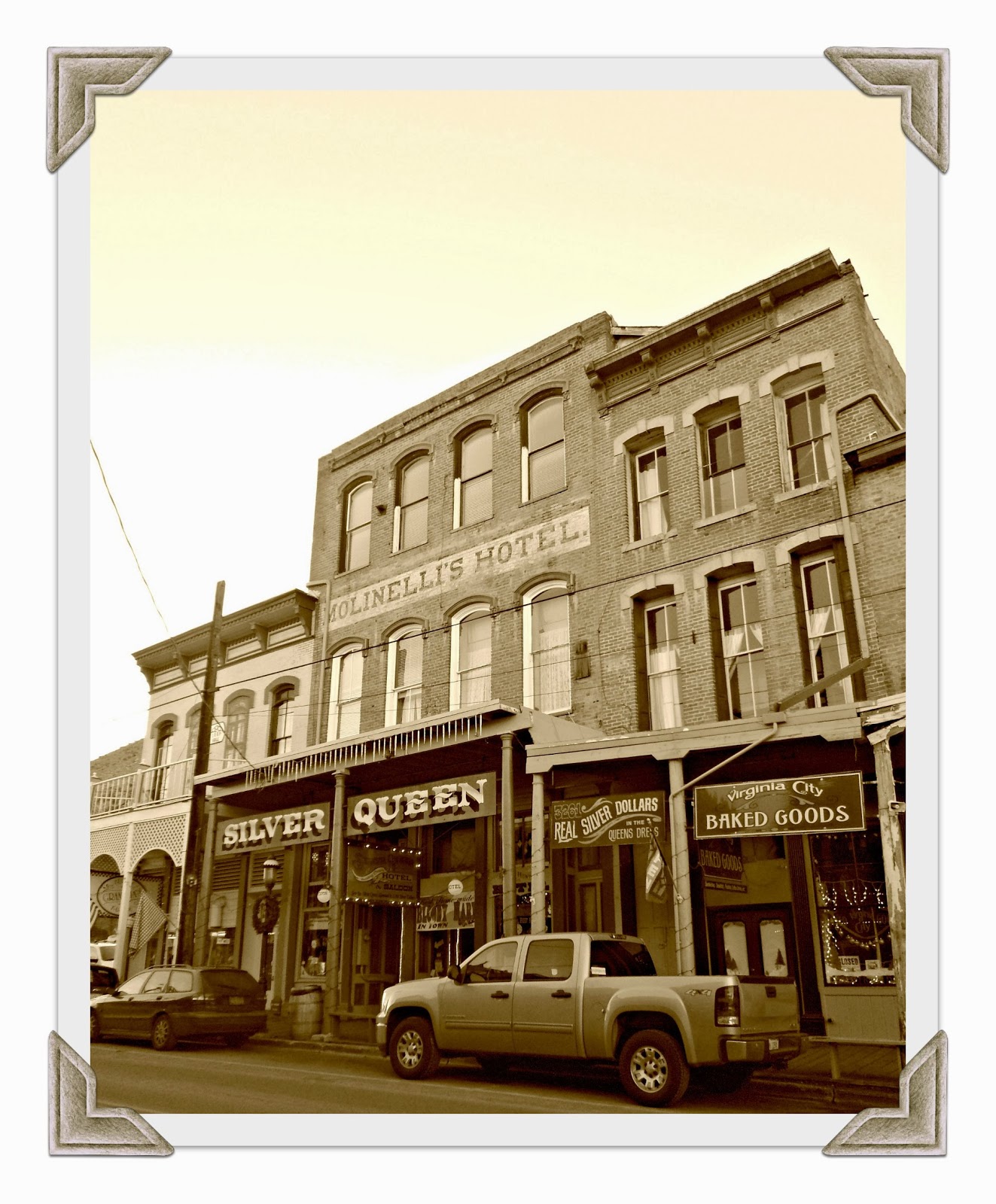 The Silver Queen Hotel is a favorite with ghost hunters because it's supposed to be haunted.  The hotel's namesake, the Silver Queen, is actually a portrait of a woman in the back of the hotel.  Her dress has 3,261 Morgan silver dollars stuck onto the painting -- like macaroni art, but more valuable.  Again, I didn't think it was worth all the hype, but it's one of those Been There, Done That things that you just have to do when visiting a place. 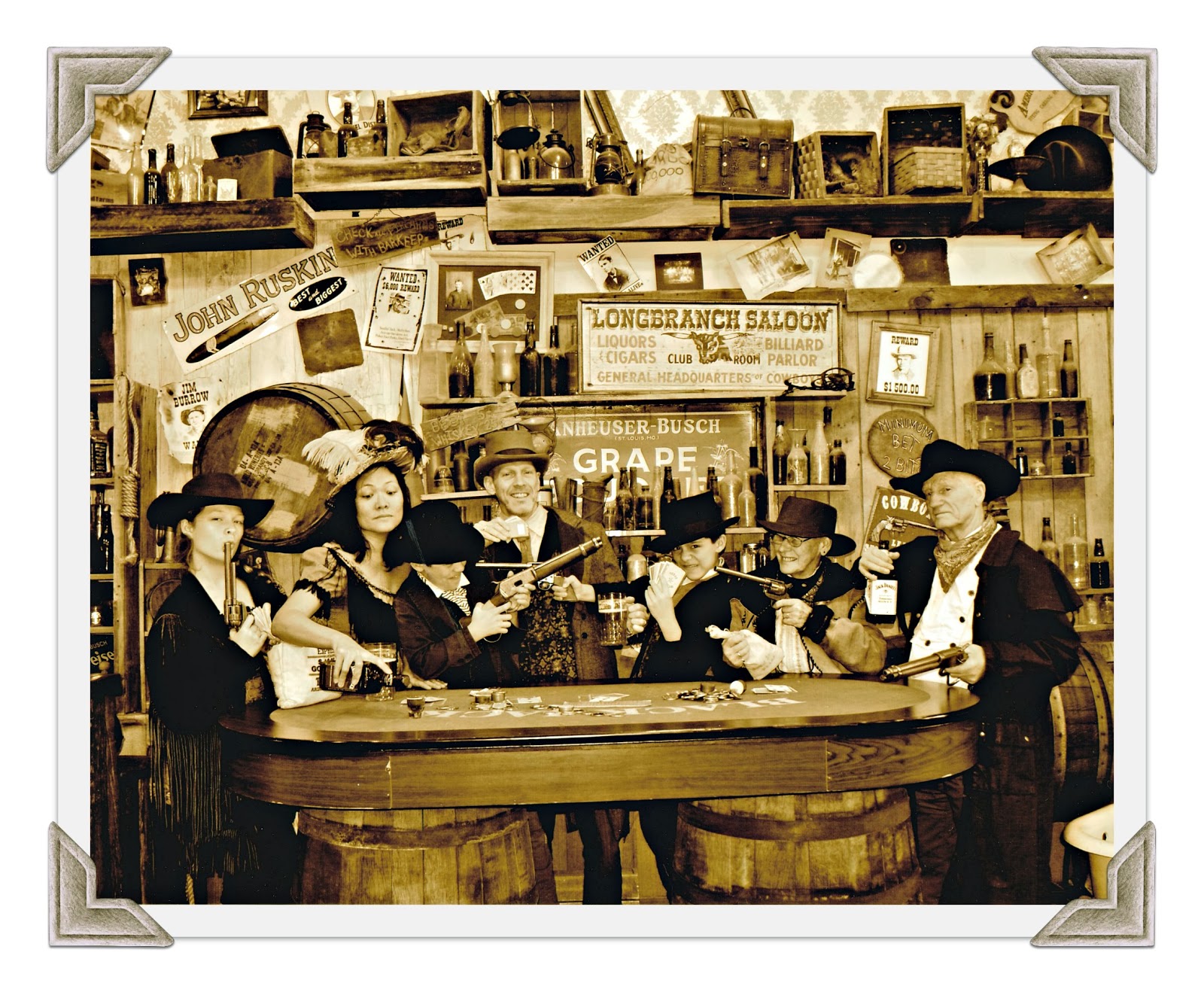 My favorite Virginia City attraction?  The Vintage Photo Booth!  Yes, there are lots of places that let you dress up in period clothing and pose for old-fashioned photos, but this is the first time my family has actually consented to pose with me  Every time I see one of these places, I beg and plead, but Alfie and the kids have always outvoted me... until Virginia City.  Alfie's parents made all the difference; everyone agreed that it would literally be a once-in-a-lifetime chance to take a photo like this. We ended up with a couple of Awesome saloon photos, and even though it cost a ridiculous amount of money, I don't regret it one bit. 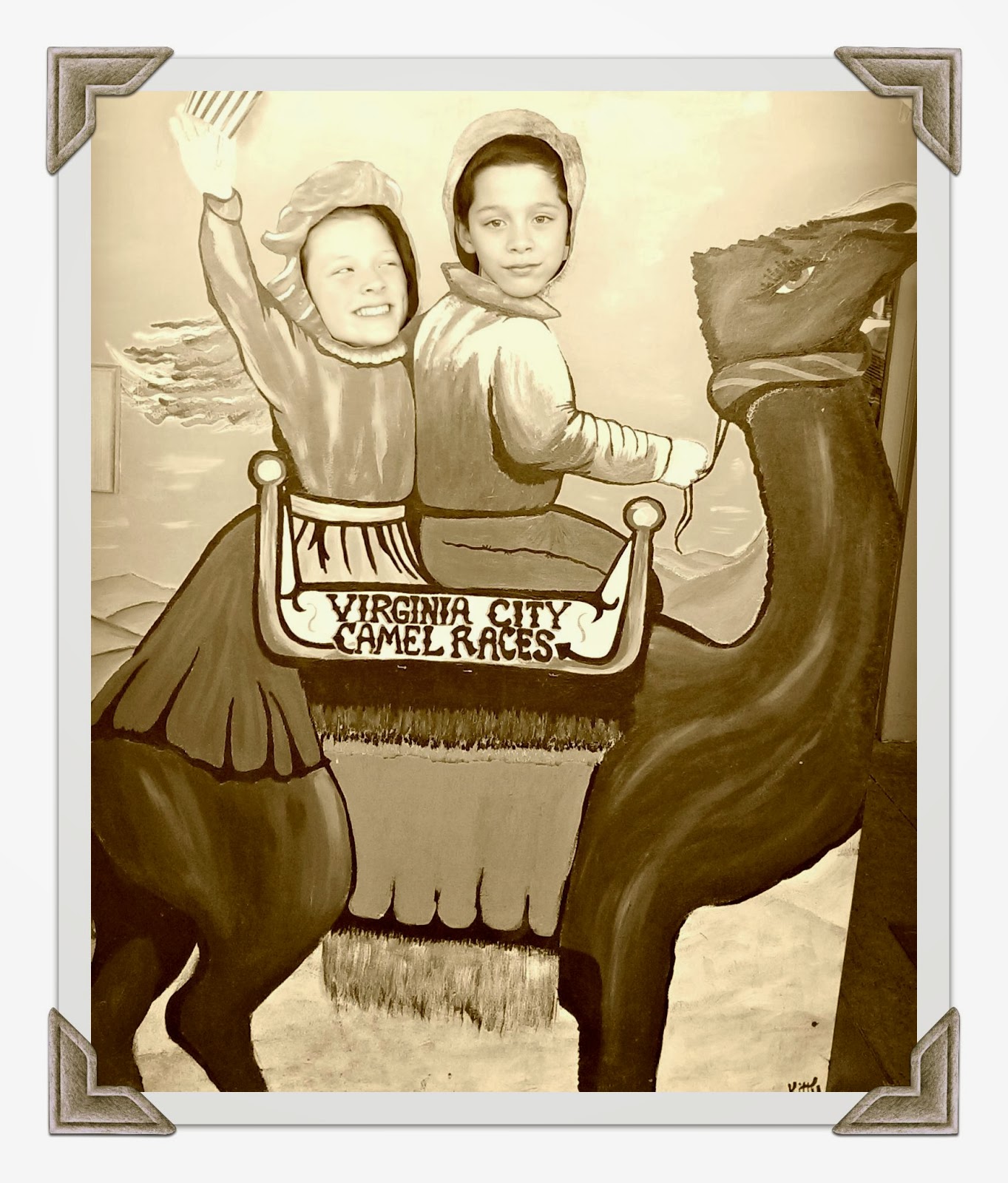 Unfortunately, many of Virginia City's best attractions were closed when we visited.  Many attractions are open only in the warmer months, such as the deeper mine shafts, train rides, stagecoach rides and schoolhouse tours, not to mention the Virginia City Camel Races event in July.  We'll definitely be going back in the summer!