Ten years ago, two little boys entered my life.  I was nervous, scared, unprepared, unsure.  The year that followed was one of the most difficult of my life.  But I wouldn't trade that year, or my boys, for all the riches on earth.  They were exactly what we needed to make our family complete!

Holiday birthdays often get lost in all the celebrations, and that has certainly been the case for 3Po and Jammy on my blog -- but not this time.  I haven't posted anything since Christmas (I think that's my longest dry spell ever) but I was determined to give their double-digit birthday the acknowledgement it deserves.  So I'm delaying the 2013 Highlights posts, the Ski Trip posts, the Family Game Night posts, the New Year's Resolutions posts and all the other posts I have planned in my head.  Those can wait.  What can't wait is my message for 3Po and Jammy:

Happy Birthday, Boys.  These last ten years have been a wild, wonderful ride.  I'm not going to dwell on all the twin cliches -- double trouble, twice blessed -- even though they're true.  The chances of having identical twins are about 0.4%, or 1 in 250, but the chances of having both of you were one in a million.  Your daddy and I definitely won the lottery when we had you!

To celebrate 3Po and Jammy's 10th birthday, here are 10 fun facts about their birth:

10) We didn't know we were having twins until my first ultrasound at 21 weeks.  Our technician turned to us and said, "You know you're having twins, right?".  Um, no.  I never even considered it as a possibility. Even my OB was fooled: all through those first 21 weeks, she assumed the heartbeat she heard was all coming from a single heart.  But as soon as we saw those two circles on the ultrasound, even before the technician opened his mouth, we knew.  To summarize our reaction:  @#%&;^!!!!!!!!! 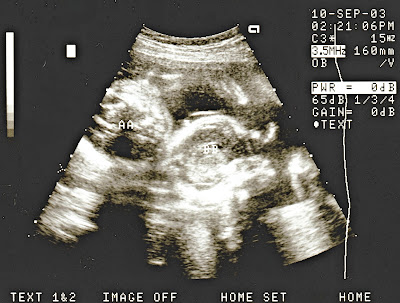 9) That wasn't all we found out during that ultrasound:  both fetuses were diagnosed with ventriculomegaly.  It's a brain condition occurring in about 1% of pregnancies where the lateral ventricles (structures containing cerebrospinal fluid) are enlarged. It's not a good thing -- ventriculomegaly is associated with spina bifida, heart defects, chromosomal abnormalities and other defects.  Both babies were monitored closely after that.  It was the scariest time in my life. Fortunately, their lateral ventricle measurements gradually returned to normal over the next 15 weeks.  I'm thankful every day for their health.

8) Fetuses in multiple gestations are given identifiers: Baby A, B, C. etc....  Jammy was Baby A because he was closest to my cervix.  3Po was Baby B.  When they grew big enough for me to feel them moving, I mostly felt Baby A. 3Po rarely stirred -- which was a constant source of worry, given all the ventriculomegaly stuff.

7) I carried them till 38 weeks, which is considered full term even for singleton births.  Every mom of multiples I share that factoid with is impressed.  I guess it's because I'm tall, so the boys had room to grow.  In any case, by the end of the pregnancy I was begging anyone who would listen to take these boys out. 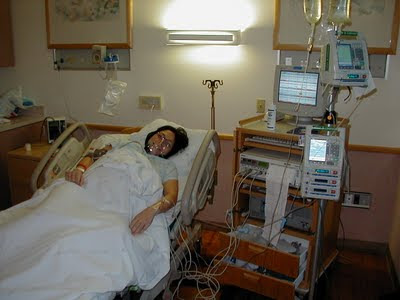 6) My other claim to fame:  I gave birth to both of them vaginally, not via C-section as most twins are delivered.  I was lucky: Baby A presented headfirst, so a vaginal birth was the first option.  However, once Baby A is out, there was no telling what Baby B would do, now that he had that huge uterus all to himself.  He might have decided to pull a few cartwheels and land in breech position, in which case they'd have to do an emergency C-section... which is why, unlike my first pregnancy, both births occurred in an operating room, with an army of nurses standing by, just in case.  Fortunately, 3Po chose to come out headfirst, so he was born vaginally, 20 minutes after Jammy. 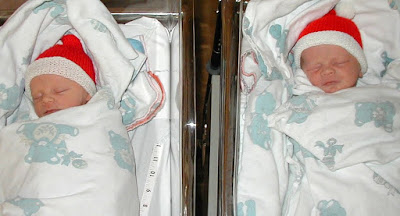 4) 3Po and Jammy could not have been more different when they were born: almost  a pound difference in weight, and half an inch difference in height.  3Po was the larger baby.  He had lighter skin and lighter hair.  Even the way their hair grew was different!  We had a DNA test done, and the results were conclusive: monozygotic (identical) with greater than 99% probability.  Turns out, we needn't have bothered: three months later, we couldn't tell them apart. We still get them mixed up from time to time.

3) Even identical twins aren't 100% identical.  3Po suffered from severe eczema in his first year, and still gets it in the winter months.  He's also allergic to various forms of tree pollen, grass pollen, dust and mold.  Jammy, on the other hand, has always had baby-smooth skin, and he isn't allergic to anything. 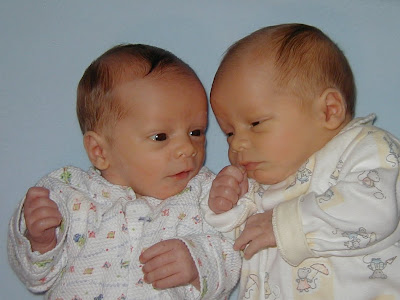 1) 3Po and Jammy have never been apart for more than a day in their lives.  Their longest separation occurred a few days after they were born.  Both boys had newborn jaundice, and had to go back into the hospital for intensive phototherapy to lower their bilirubin levels.  3Po was much yellower than Jammy, so he had to stay an extra night (or was it two?) by himself.  They've been constant companions and best friends ever since. 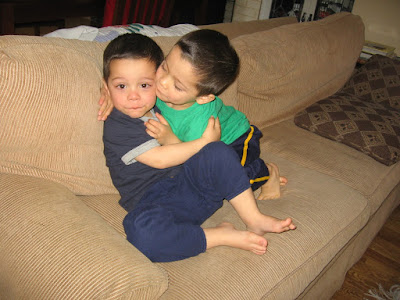 Happy birthday to your wonderful twins! Can't believe you delivered them vaginally and at 38 weeks!

so fun to read through their birth story!