Paying My Respects, 8 Years After

When I was invited to attend Time to Play magazine's 2009 Holiday showcase, I almost peed in my pants in my eagerness to attend, for two reasons; first, because I would get to see all the coolest -- and hottest -- toys for the 2009 holiday season, and second, because the event was in New York.

Once I was sure this trip was going to happen, I knew immediately that there was one place in New York I wanted to visit: Ground Zero. The last time I was in Manhattan, the Twin Towers were still standing.

It was weird looking at the Manhattan skyline from the airport car window and not seeing the twin towers jutting up into the sky. It's difficult to suppress a sigh. They were so magnificent. It's such a shame. I cannot imagine what New Yorkers must feel. They must miss it fiercely, as though the towers were limbs amputated from the body of buildings that is Manhattan. 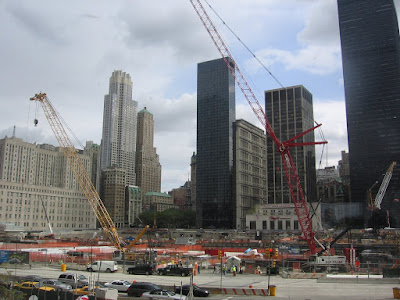 Today Ground Zero looked like a busy, bustling construction site. As I looked down on the site from my vantage point at the World Financial Center, I remembered my own visits to the WTC. As a little kid, I remember standing on the ground, staring up at the two buildings until I was almost bent over backwards in my effort to see the top. I remember going up to the Top of the World observation deck in Tower 2. Another time, I remember getting off the subway at the station underneath the complex and shopping at Century 21 afterwards. On another visit, I remember having lunch at the Windows on the World restaurant in Tower 1, and looking out the windows and down at the clouds. 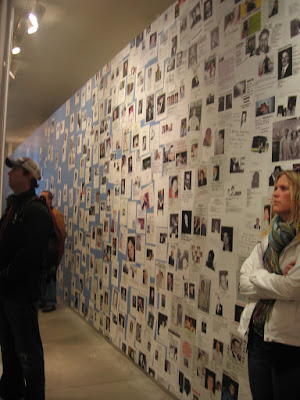 I stopped by the Tribute WTC Visitor Center, where they have a gallery of personal images, videos, artifacts and stories of people affected by the tragedy. 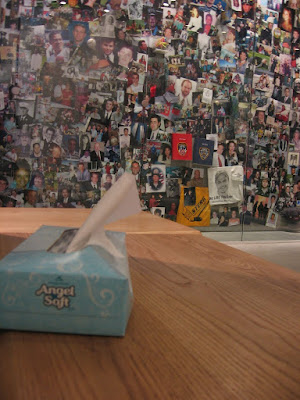 The volunteers have thoughtfully left boxes of tissues at strategic places throughout the galleries. I used my fair share of them.


I also signed up for a walking tour around the perimeter of Ground Zero and a couple of memorials built to commemorate the lives that were lost. I normally don't like organized tours, and I didn't want something where the guide points and the tourists gawk. I especially don't like the thought of commercializing and profiting from what happened.

But I signed up because the tour guides are volunteers who were survivors, family members, rescue workers, volunteers, or people who were significantly affected by 9/11. Each tour is different because each tour guide interweaves the facts with their personal accounts of their 9/11 experience. One of our tour guides was a retired firefighter and volunteer rescue worker who spoke of inhaling so much white (toxic) dust during his rescue work that his wife's lips burned when she kissed him. Our other tour guide spoke about the search for her daughter, hearing a little girl talk about how she saw "the birds in the sky were burning", and wondering how many years later that little girl would realize that what she saw burning in the sky were not actually birds. It was touching and moving and very emotional.

I know many New Yorkers feel almost insulted that tourists flock to the site, that it's disrespectful to be posing for photos in front of this place of such tragedy. But what happened at Ground Zero affected so many people to some degree, and it is fitting that people should go there to visit and pay their respects and mourn the loss of the landmarks and community and lives. It's what people do when they care.
posted on Wednesday, September 30, 2009 Labels: giving thanks, memories, things that matter, travel
Email ThisBlogThis!Share to TwitterShare to FacebookShare to Pinterest

Great meeting you last night. Thanks for this thoughtful post. I've only visited Ground Zero shortly after 9/11 and should someday return. My husband was in NYC downtown that day (from Philly) for a meeting and saw everything....heard plane 1 hit, the aftermath, saw plane 2 hit as he wondered if his meeting might be canceled, and then utter chaos. A very scary day waiting to hear from him - it was until after 6 that night that we knew he was okay - for our happy ending. Thank you again for posting and remembering.

This was great to read. I have never been to Ground Zero and I'm not sure how I would react if I went there. In the days following 9/11, I had so many different emotions running through me. It was great reading about your experience there today and the tour sounds like an eye opening experience.

I've never been back, but am always so keen to have others share their experience. This was beautifully written and reflects an honesty and respect.

Wow this post is simply chilling. I am speechless when I am usually rattling on. Thanks for the pause to just let myself feel these families pain and to offer up a prayer of mercy and healing.