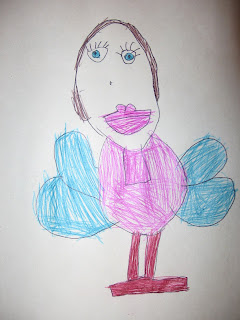 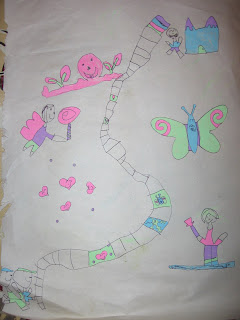 James (age 3): Nufink!
Natalie (age 5): I like to imagine that my Littlest Pet Shop toys come alive at night when I'm asleep and have little parties. They sneak into my Barbie box and Polly Pocket box and take out things that pets like, like tuna fish cans and towels and balls. I also like to imagine that I have a ballerina fairy friend named Kelly.
My children, like most children, love to fantasize, and their imagination knows no bounds. Whether it involves making a knight fly or having a conversation with a train or making their motorcycles drive cars, Philip and James visit Fantasyland every time they play. Natalie, being 5, can articulate her fantasies in more detail. She is old enough to weave pretty intricate stories, draw pictures about what she is imagining, write down what is going on in her pictures, and expand her favorite fantasies from one day to the next.
Of course, not all their fantasies are nice. James will not go downstairs or into an empty room or bathroom on his own, because he says there are monsters. At one point when Natalie was three, she would not go to sleep on her own because she was convinced that the wolf (from the Three Little Pigs) would get her. Graham and I could never figure out the best way to reassure them: whether to tell them it wasn't real, or play along (i.e. "we have burglar alarms that will keep the wolf away", "daddy will stay up and make sure the monster doesn't come", etc..).
Natalie recently participated in a study on imagination done by Stanford's The Learning Lab (all the kids have participated in their studies from time to time; that's Philip's photo on their home page!). Five-year-olds were presented with three identical empty boxes and asked to pretend that something scary was in box A (Natalie chose to imagine a spider), something they liked was in box B (she chose a doll), and something they didn't really care (an apple) about was in box C. They were asked time and time again if there was really something in the box, and the children said there was nothing. Then the children were asked to point, just point, to any box. This little game was repeated several times.
The researcher told me that almost all the children in the study (Natalie included) would point to box B first and box A the last, even when the boxes were switched around. Even though they knew that nothing was in the box, they preferred the "nice" box and avoided the "scary" one (I wonder if they ever did this test with a group of adults to see if they got the same results). The researcher said that this is one of a bunch of studies being done to show that children really do have trouble separating fantasy from reality.
So with regards to my kids' monster fantasies, it sounds like telling them the monsters aren't real won't help. It sounds like it would be better to acknowledge their fears within the context of those fears and provide them with tools that will empower them ("Monsters are allergic to kids!" or "Just say the magic word, SNAZZLE, and the monsters will disappear" or "Here is a wolf horn that you can keep beside your bed and blow to scare away any wolves").
Children the world over have fantasies. As parents, we need to encourage these fantasies, not belittle them by insisting they aren't real. Besides, some of their fantasies can actually become reality. Just think where we would be if a few special children in the past did not have dreams of men flying in machines through the air!
To read more Sunday Scribblings, click here.
posted on Friday, January 19, 2007 Labels: parenting, sunday scribblings
Email ThisBlogThis!Share to TwitterShare to FacebookShare to Pinterest

That was very thought provoking, and not having any children of my own, I don't know how I would handle the situation... I have a hard enough time convincing myself that there aren't any monsters out there!
Great post, Bongga Mom!

Oh my your post made me time travel back to 1985 - and I can hear my two year old urging her father to chase the munchies (monsters) away!
All the children's answers were charming - I like nufink! best.

I like the idea of a wolf horn or that saying the word Snazzle would chase away the wolf or monster. I used to imagine I my stuffed animals had secret lives they lived when I was away at school. Now days, I imagine my cat understands everything I say.

I think the test results would likely be replicated if conducted with adults. Ever had a bad dream, or worse, a dream in which someone you love does you wrong, somehow, and then you're irritated, anxious, or POd with them all day? Sort of the same thing.

Here's certainty - that your kiddos will gift humanity with greatness - of any sort!