Chronicles of a boy and his Tati 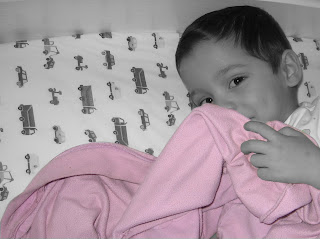 Once upon a time there was a little boy who kicked the covers off at night. So his parents covered him up in a pink fleece zip-up sleepsack. Finally, he was warm and safe and snuggly, and he slept.

The pink sleepsack became his best friend, and he called it Tati. Tati was the first thing he reached for in the morning, and the last thing he cuddled at night. He dragged it over sidewalks and grass, carpet and wood, until his mama had to take it from him and wash it till it was squeaky-clean and fluffy-soft.

On his first day of preschool, Tati was with him. He entered the classroom, full of strange teachers and children, with his lower lip quivering and tears in his eyes. But he held Tati close, waved to his mama and went inside. When he broke his finger, Tati went with him to the emergency room, and comforted him even when they put him on a cold, hard bed and poked him and hurt him. When his big sister teased, "Pink is for girls!", he stoutly refused to listen and hugged Tati harder.

The boy had many adventures, and his faithful Tati always went with him. Even though he sometimes had to leave Tati behind, he knew Tati would always be waiting for him.

This isn't very long, as Chronicles go; the boy is, after all, only 3. But I'd like to think I can predict how the rest of it may go:

The boy will have many more adventures, and his faithful Tati will always go with him. Giving him courage, reassurance, love and strength.

Someday, the boy will enter kindergarten, and on his first day, Tati will be with him. As he enters the door to his classroom, he will see his mama behind him, with her lower lip quivering and tears in her eyes. He will run back to her, give her a hug and hand her the Tati, saying, "Here mama, you need Tati more than I do."

His mama will hold Tati close, breathing in the little-boy smell. She will wash Tati until it is squeaky-clean and fluffy-soft. She will fold it carefully and put it away. The Tati will stay hidden for many years, until the little boy becomes a big boy, and perhaps has a little boy or girl of his own. And then the Chronicles will begin all over again.

I babysat a baby and the parents used a baby sack b/c she too kicked off the covers. I've touched one, they very soft and feel safe. Good choice for a Tati, I'd say.

Thanks for the read.

There is a children's book that you may want to look into. I read it often to my son who had his own "tati" when he was little. It's called "Something From Nothing" by Phoebe Gilman,a Canadian writer. It has wonderful illustrations and a wonderful story about a boy and his blanket and what happens to the blanket when it gets old and tattered......... :)

My eyes are just swimming in tears. Such a lovely story.
Thanks for sharing.
My Scribbling isn't up yet, but it should be by Sunday afternoon.
Take care

This was so sweet- we can all relate to your son's feelings for his Tati. I love the ending, Bongga Mom...

ps. The second part of my sunday scribbling will be online tomorrow ;)

Such a wonderful, sweet story! And the twist at the end is nice too - it's so hard sending your child off to kindergarten!

I have a 15 year old who still drags his Tati (never heard that term before) around here at home. We call him "Linus" because he takes it, along with his pillow, from room to room to snuggle up with his constant companions, the dogs. :-)

Aww...my daughter is 18 months, and even though she doesn't have a Tati yet, I'm already sentimental about the things she DOES love. *sniff* Thanks for the sweet story. :)

Your post brought back some bitter-sweet memories. I too had a Tati when I was a little girl. My Tati was a green and white cat made from terry cloth, stuffed with foam, and his name was Oh-yan.

Unfortunately my love for Oh-yan was very intense and rather brutal and so he started falling apart. By the time I was around six years old he was not only in tatters but also very dirty and my mother couldn't wash him nor mend him. So he was thrown out.

I hope your son's Tati will last many more years than my Oh-yan.

I too have a very old shawl which I refuse to part with. When I am down in the dumps, I can still find solace in my now almost tattered blue shawl.

May the tati always be there with the boy.

Awww that got me right in the heart! I liked your addition and the B&W showing off tati ;)

I loved this story, and the way you tied it all up at the end!
The photo is marvelous too - love the contrast between B&W and color.

Ohh.. lovingly sentimental.
I too have a Tati of my own :)
I love the way you chronicled this special part of your son's life.

I slept with my pink blankie every night up through the night that I was in labor with my son. It was so comforting to hold onto something from my childhood as I waited to welcome my baby into his own. And strangely enough, I don't need it anymore to sleep. Becoming a mother did something to me - I now get to be the comforter instead of the comforted. It's amazing, isn't it?