You want to be whaaat for Halloween?

I should have known it was too easy. I asked the kids three weeks ago what they wanted to be for Halloween, and the answers were quick and firm: spider (Pea), ghost (CleanBoy), Buzz Lightyear (3Po). No problem. The Pea already has a long black unitard; all I had to do was stuff some black socks with tissue or stockings and sew them on the unitard for legs. We have a white cloth with a hole in the middle that we use when cutting the boys' hair -- perfect for a ghost. And my sister sent us her son's old Buzz Lightyear costume. I thought we'd be all set.

That was before they started changing their minds. First 3Po wanted to be a Ninja Turtle. Then he and CleanBoy started fighting over the lone Buzz costume. I told them they need to decide and stick with it because we need time to find costumes. So now they want to be Power Rangers, green (3Po) and blue (CleanBoy). That wouldn't be too bad except the blue Power Ranger costume currently being sold at the Disney Store is for girls. I've tried bidding on old blue boy Power Ranger costumes twice on eBay, only to be outbid both times. I'm currently trying to convince CleanBoy that Red Power Ranger is just as cool as Blue.

At least Pea's costume is easy, I consoled myself. No such thing. She has decided that a spider is too boyish, and she's afraid her friends might think her spider costume would look weird. She decided she wants to be a guinea pig (like in the Fluffy Easy Reader series). Whaaat???? I don't even know what a guinea pig looks like! Google "guinea pig costume", and the only hits you get are costumes for guinea pigs. She said she would wear orange pajamas, glue a white circle on her front, and paint a white stripe down the middle of her face. She's creative, I'll give her that. 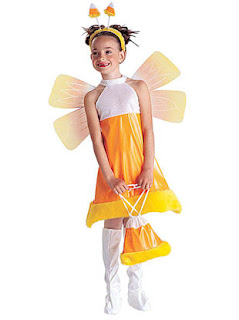 Alfie, wise as ever, suggested she take a deep breath and thumb through some of the Halloween catalogs that seem to make their way to our house this time of year. Now she wants to be a candy corn fairy. Costume Express is the only place I can find it, and it costs $80 for the whole ensemble. I found just one used costume on eBay; again I was outbid. Maybe I'll give her more time to change her mind.
posted on Saturday, October 06, 2007 Labels: kids, parenting
Email ThisBlogThis!Share to TwitterShare to FacebookShare to Pinterest