A room of their own 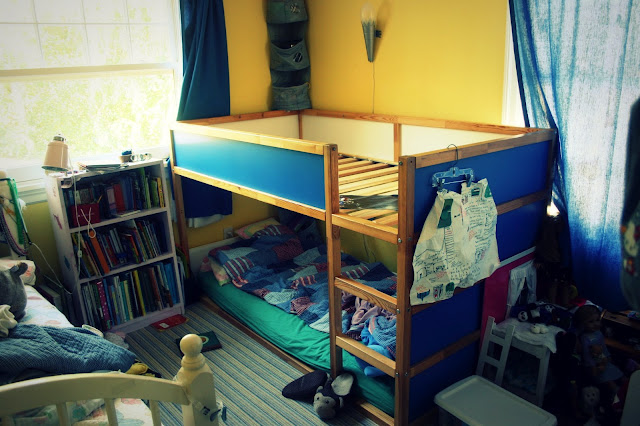 When we first began thinking of adding a second story to our bungalow, The Pea was an only child.  3Po and Jammy weren't even a twinkle in Alfie's eye, let alone two.  So our plan was to add 2 upstairs rooms, one for The Pea and another for us.  I suppose we could have changed our plans once the boys were conceived and born, but we didn't really have the space or the money for the third room, so we decided to let all 3 kids share a room.

That's how it has been for 8 years.

For the most part, it worked.  The kids learned to get along, and they learned to sleep through whatever noises their siblings made.  But it has gotten more challenging as the kids grew larger and their stuff multiplied.

Even though we have 2 perfectly good rooms downstairs (used as a guest room and a play room), we resisted putting them in separate rooms for the longest time.  It was so much more convenient (for night time potty training, nightmare resolution, nighttime sickness, etc..)  to have everyone sleeping upstairs.

But this year we had to face the inevitable.  The Pea was growing up, and she needed her own place to study, hang out with her friends and be a girl.  We promised her she'd get her own room by the time she entered middle school, so we spent a good many weekends making good on our promise.

Since they would continue to share a room, we decided to give 3Po and Jammy the biggest room in the house, the old downstairs guest bedroom. Our plan was to dismantle the playroom (toys would now go in the kids' bedrooms), put guests in the old playroom, and keep The Pea upstairs in the smallest room. 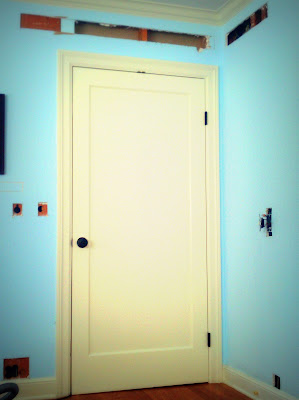 As we've learned from previous remodel experience, anything involving even the slightest hint of home remodeling always takes far longer than you expect.  In order to get the downstairs room ready for the boys, we had to do quite a bit of work.  To start with, we had a new door installed.  Then we had to do some rewiring.  Did I say some rewiring?  I meant A LOT of rewiring.  With old houses like ours, you have no idea what's lurking behind those walls! 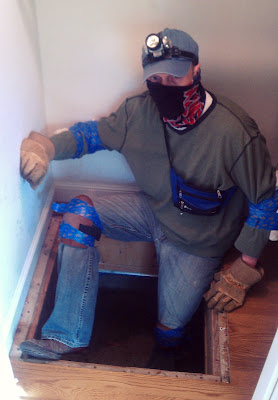 Poor Alfie had to spend a lot of time crawling on his belly underneath the house! 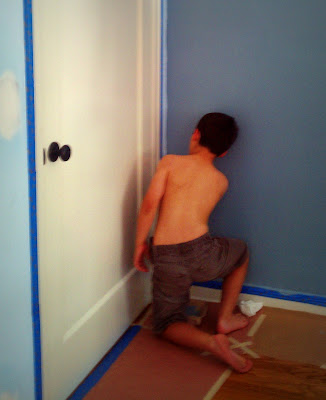 The room needed a fresh coat of paint, so we let 3Po and Jammy choose their room colors.  They decided on a nice powdery blue for 3 walls, and a bright asparagus green for the 4th accent wall.  Of course we relied on child labor once again to get the work done. 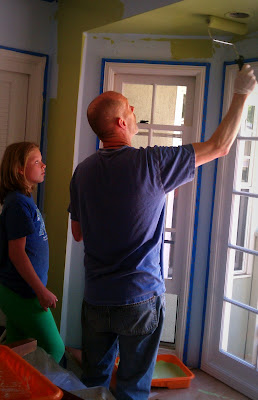 The Pea was only too happy to help; after all, the sooner we got it done, the sooner she'd get her own room.  After Alfie showed her how to use a paint roller, she did quite a good job. 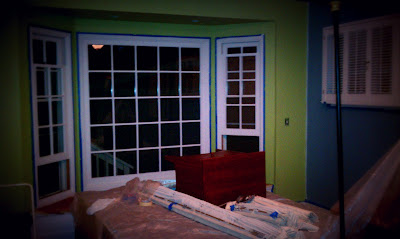 We got the room painted just as the 2011-2012 schoolyear came to a close.  We had to put Operation Room Switch on hiatus for the summer since we spent so much time out of the country, but once we got back, we resumed work with a vengeance.  We've spent the better part of 2 weeks moving the guest room furniture into the old playroom, and all the kids toys into the old guest room (now the boys' room).  I've lost count of the number of times I've done a "Big Toy Clean" and weeded out toys we don't have space for!  Our tax deductions for charitable donations this year will be huge.

Finally, over Labor Day Weekend, we made the Big Switch.  We dismantled the boys' bunk bed and moved it downstairs.  We emptied the upstairs room (now The Pea's room) of everything boy-related.  We finally have separate rooms for girls and boys. 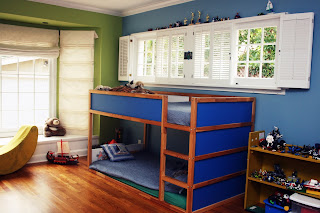 I love the look of 3Po and Jammy's new room!  There's so much space for them to spread out and play.  They're happy to have a room they can decorate to reflect their boyish tastes, and they have great plans for Lego displays and posters. 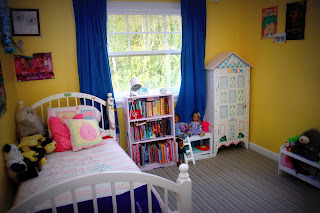 The Pea's room looks so much bigger, now that there's only 1 person sleeping in it instead of 3.  We still have to repaint the walls (she also has ambitious plans of filling the walls with posters and corkboards), and we need to get her a desk, but we're going to take a break for a couple of months and let everyone enjoy their new rooms.

All 3 kids have been remarkably patient and understanding throughout the whole process, particularly The Pea (What 11-year-old girl would want to share a room with her brothers?  What 10 or 9 year-old girl would?).  Seeing her delight at finally having her own space makes everything worth it.

It looks great! I am a big fan of child labor as well.