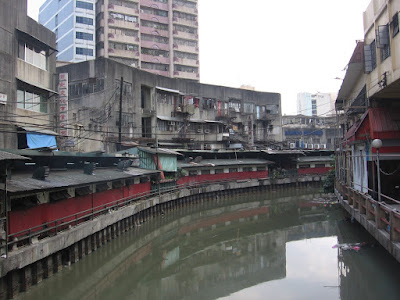 My dad still has memories of being able to swim (swim!!) in Manila's Pasig river. But even when I was growing up in the 70's, it was already so polluted that I wouldn't even want to ride a boat on that river. Sadly, things haven't changed: many residents still throw their garbage into the canals and rivers, resulting in dirty, polluted water. This is such a normal scene in Manila that I wouldn't normally take a photo of it, but Alfie was so apalled that he had to take this photo. Maybe we should all be as apalled as Alfie; then maybe we'd be more proactive in getting people to stop.

By the way, that red wall you see on one side of the river? There's a restaurant on the other side of it.

Ick. Does it smell? I cannot imagine those people at the restaurant!

That's really sad. It happens here too, where you could swim before, now you have to pinch your nose !

It's really sad. We read in our textbooks how vital the Pasig River was to the residents of Manila and we never got to see that.

Great take on the theme.

Yikes! I imagine it smells too. I would not want to eat at that restaurant.

Why can't we humans take better care of our planet? :(

It is terrible thinking about garbage being thrown into water. Good take on the theme. Happy weekend.

That is so sad that the river has been allowed to get so polluted. Hopefully one day they will try to clean it up.

A sad sight. THere is hope. The Thames 40 years ago was hugely polluted and biologically dead. Now it is a clean river with lots of life in it.

Canals are so scenic but not with garbage in them! Happy to learn from Jams that there is hope.

Thanks for visiting mine and have a nice weekend.

it makes me sad to the nth level. people never learn. i know this does not happen in the Philippines alone. but how can people be so uncaring. the world is turning into a sham..

That is sad Bonggamom, but I guess it's hard in a crowded place. A water view is not always beautiful,is it?

It reminds me of the Riverwalk in San Antonio, although I don't know if it is a result of garbage or not. It had a nasty smell about it.
My construction trash or garbage is up.

I read on someone's blog a few weeks go (it might have been an article... I'm not sure) about people getting together to clean the canals in their area and educating the school children about the need to revitalize and protect the canals. It was really inspiring. I hope it catches on. Sometimes all it takes is a few dedicated people to get a movement going!

How sad and disgusting, especially when water is so vital. And that could be such a pretty sight, right by the river.

Your Dad did that? wow! I've never seen Pasig river clean but lately, with some organizations taking more active participation, parts of the river are starting to get better. I really hope that more people will get involved in this.

Old traditions die hard. It is so sad the tradition started. Good choice for garbage. Thanks for visiting.

Swim!? My Filipino friends pointed it out to me when I was in Manila 2 years ago. It was filled with more garbage then this.