I'm happy to see the Philippines' Boracay Island once again receiving world reknown, this time as Travel + Leisure's 5th Most Romantic Island in the World for 2013.  Having been there several times, I don't need any travel magazines to tell me what I already know: that Boracay's powder-white sand, turquoise blue waters, lush greenery, world-class resorts and unspoiled nature make it the one of the best island beaches in the world.  But it's nice to hear the rest of the world admit it :)

Unfortunately, we weren't able to visit Boracay this time around, because while we were in the Philippines last month, a typhoon had grounded all planes to the nearest airport and suspended all ferry rides to the island on the day we were scheduled to fly there.  We spent a miserable day at the airport, being shuttled back and forth from terminal to airplane, trapped in the cabin, waiting for the clearance to depart that never came.  The typhoon was scheduled to last several days, so we figured that even if we were cleared to fly the next day, we'd be spending our entire Boracay trip watching raindrops pour and drip off our hotel room window -- and in the end, we made the decision to cancel our trip.

Fortunately, there are 7,107 islands in the Philippines (plus or minus a few, depending on whether it's low tide or high tide), and Boracay isn't the only jewel in our archipelago -- and we managed to find another one that (almost) drowned out our disappointment at not going to Boracay. 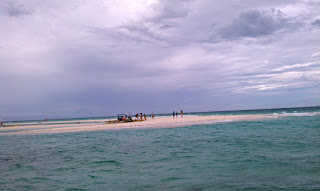 The island we went to is called White Island.  It's a tiny speck of an island just off the coast of Camiguin Island (which in itself is quite a small island, just 91.89 sq miles/238 km², and the road circumnavigating the island is just 64km or 40 miles).  Actually, to call it an island is a huge exaggeration; it's more of a sandbar than an island.  It has no trees or soil, just white sand.  I can't even tell you how big it is, because it depends on the tide! 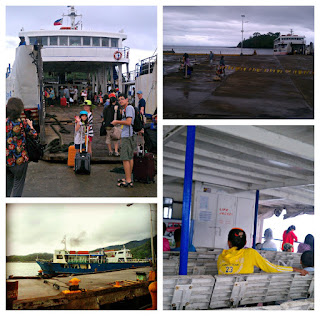 Getting to White Island is a bit of a pain an adventure.  You have to fly to Cagayan de Oro City (1.5 hours from Manila), drive for 3-4 hours to get to Balingoan port (it's just 88 km but you face winding, 1-lane roads and excruciatingly slow vehicles on the way), then take a 1 hour ride an ancient, lumbering ferryboat to Camiguin Island. 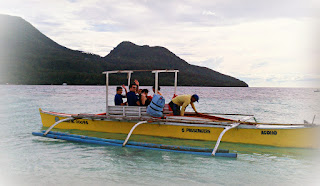 Once you're on Camiguin Island, getting to White Island is easy.  It's just a 10-minute ride on a small outrigger canoe -- also called bangka or tuk-tuk or pumpboat -- and you can easily find a boatman to hire on the shores facing White Island.  These are the smallest passenger bangkas I've ever ridden on, and I'll confess to feeling a spot of seasickness even though the water was pretty calm -- but you'll be able to fix your eyes on White Island the whole time, so it's manageable.  Besides, what's a few minutes of nausea compared to crystal clear waters and sand just as white (though not as powdery) as Boracay? 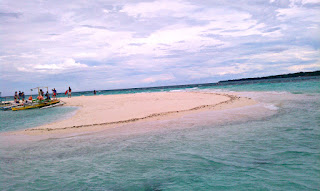 You really can't get much smaller than White Island.  You can see the whole island as you approach it.  There were only 4 tiny bangkas (max. of 6 passengers each) docked on the island the day we visited, and our family -- cousins, aunts, siblings -- had hired 3 of them, so we practically had the whole island to ourselves.

White Island is shaped like a boomerang, with the outer curve facing the Sulu Sea and the inner curve facing the island of Camiguin.  As a result, the inner curve contains a little cove of shallow, calm water that's perfect for kids to swim and snorkel in.  The outer edges of White Island are still perfectly safe, just not as tranquil in windy conditions, and the island is surrounded by coral, so its extremely popular for snorkeling and scuba diving. 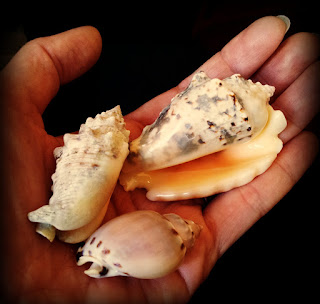 Speaking of coral, that's probably what makes White Island's sands less powdery than Boracay.  So much of the coral breaks off and washes on the shore, walking barefoot can be downright painful in certain areas.  The upside is that you can search along the water's edge and find all kinds of beautiful corals and shells.  Usually the shells I find on a beach, while respectable, are nothing near the size and quality of the shells you see in souvenir shops.  That's because locals usually get up at dawn to gather the biggest and best shells to sell, leaving the dregs, if any, for the tourists.  All I can say is, the good shells must be really amazing on White Island, because the "dregs" I found on White Island are the biggest shells I've ever gathered "in the wild".

As any parent knows, you have to take your "couple time" wherever and whenever you can get it, so Alfie and I seized the chance and went for a little romantic walk around the island.  We were far enough away from the kids that we could exchange a few flirtatious words (as well as an inappropriate squeeze or two), but near enough to see them and make sure they were okay.  When you turn around face the ocean, it's easy to believe there's nothing in the world except you, your sweetums, the blue surf, blazing sun and white sand.

White Island might not be on Travel + Leisure's Most Romantic Islands list... but that's probably because the editors haven't been there yet!

What beautiful shells! Would love to visit there someday.

Getting to Camiguin is an adventure indeed. Especially if you're used to timeframes. The ferry seems to leave only if it's full... It's worth waiting at least. I have been to Camiguin several times and will be back again some day..