Jumpin' with Jammy: How to throw a trampoline birthday party

Last year I went all out for 3Po's and Jammy's 8th birthday parties.  Each of them had themed parties at home, and I sweated over every detail, from the decor to the games to the cake to the food -- and since they held separate birthday parties for the first time ever, I did it all twice.  This year, for their 9th birthday, 3Po and Jammy once again asked for separate parties, but this year I decided to give myself a break and outsource their parties to a local party place, so all I'd have to do was bring the birthday cake.

Of course, it didn't actually work out out that way.  Jammy decided on a party at a trampoline park, and I couldn't help it -- I had to do everything I could to fit a theme.


Invitations
I didn't bother with paper invites; Evite is so much more convenient for me and for Jammy's guests, plus it saves paper!  But I did customize the invite to include a photo collage of Jammy jumping, on trampolines, on a harness, into the water.  I used the header "Jumpin' Jellybeans, Jammy is 9!", because what would a themed party be without a catchy title, right?

Party Favors
Jammy's initial choice for his party was a science party at a nearby tech museum, so I had already planned to fill test tubes with jellybeans as party favors.  But it didn't work out, and once he decided on the trampoline party, it was too late to cancel my huge plastic test tube order from Amazon.  I didn't want to waste them, so I filled the test tubes with jellybeans anyway, and told Jammy they were Jumping Beans.  Phew, thanks to a bit of creative rebranding, the theme stayed intact!  I also decided to hand out packs of AirHead candies to reinforce the trampoline/jumping theme.

Birthday Cake
This year Jammy wanted a chocolate chip cookie cake like they sell at Mrs. Fields -- but since we were already splurging on the party, I decided to make my own.  It was so easy to make (the instructions are on my chocolate chip cookie cake post) it was just as yummy as the Mrs. Fields version, and it cost a fraction of the Mrs. Fields' version!  I also made a trampoline cake topper out of rice krispy treats (the frame) and fruit roll-ups (the bouncy surface and the covering for the frame).  I didn't have time to buy gummy bears to jump on the trampoline, so I used one of the boys' Lego minifigures instead.  The minifig is a gold-medal gymnast, one of a limited minifig series sold by Lego especially for the London 2012 Olympic games.

Activities
This, of course, was the easiest part!  The trampoline park  took care of everything, so I didn't have to do a thing.  Okay, I actually did prepare a couple of activities in case the kids got bored of jumping around.  I mean, who can jump around for two hours straight, right?  Actually, 3Po and Jammy and all their friends can, that's who!  My origami folding projects and drinking straw/Q-tip blowgun game (which is pretty cool, actually) never even made it out of my basket.  Boredom was the last thing I had to worry about:

The trampoline park -- it's called Rockin' Jump -- had a huge trampoline area, divided into sections so that kids could bounce side by side without affecting each other's bouncing.  The trampoline sections around the edges have sides that slope upwards so kids can literally bounce off the walls. 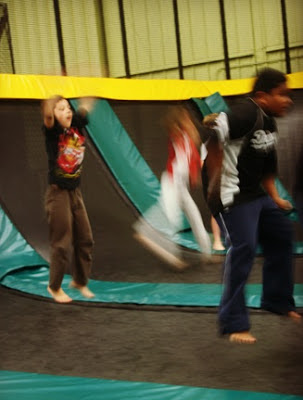 Another set of trampolines in a separate area was set up as a dodgeball court. The dodgeball court had two Rockin Jump staff members supervising dodgeball games. There was another party going on at the same time as ours, and it was open jump time, so any kid could join in, but there were many times when it was just Jammy and his guests playing dodgeball.  They had so much fun, I lost count of how many dodgeball games they played.

Another area had three trampolines with a huge foam pit at one end.  Kids would line up at the other end, with each trampoline forming a lane, and would take turns running or bouncing down the "runway" and hurtling themselves off the edge and into the foam pit.  They could jump in, do twists in the air, do somersaults or whatever they wanted.

The foam pit was really deep, so no one got hurt.  The child in the pit had to climb out before the next one in line could start -- but Jammy told me it was really tempting to keep everyone waiting while he wallowed in all that foam (maybe a part of him still remembers those ball pits from his preschool days).

Yet another trampoline area had two basketball hoops at one end. The hoops weren't quite regulation height so even little boys could take advantage of the trampoline surface and make a few slam dunks!

Speaking of slam dunks, that's the perfect phrase to describe how Jammy's party went.  All the kids enjoyed themselves, and I'm sure their parents loved the fact that they were all worn out at the end.  I felt like jumping for joy at the sight of Jammy's happy face -- but I think we've done enough jumping for the weekend. 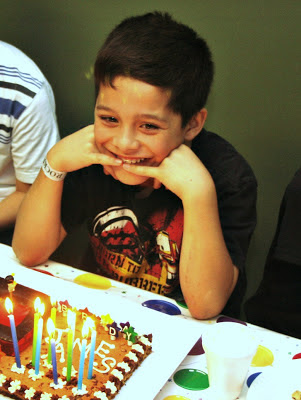 The birthday is so special movement for everyone but specially for kids and children. I am so glad for representing a well way of
Birthday parties .