When I asked Jammy what kind of party he wanted to throw for his 11th birthday, his answer was immediate: a soccer party at Sports House, and indoor soccer venue.

"Okay," I asked.  "Let me get this straight.  You play soccer with your friends Every. Single. Day.  And for your birthday, you want to play..... More Soccer".

"Anyway, it's different. I want indoor soccer.  The ball just bounces off the walls, so it never goes out of bounds."

Actually, I don't get it.  But it's his party, and  I tell my kids they get to alternate between "splurge" parties and "home" parties.  This year is a splurge party, so if indoor soccer is what he wants, that's what he gets.

To be honest, I like "splurge" party years because it means less work and less mess for me.  The party place takes care of the food, the entertainment, plates, the cups, utensils, napkins, goody bags. They do everything... well, not quite.  Hey, I'm still going to put a personal spin on it!

Instead of a single birthday cake, I went with cupcakes.  I found the cutest idea for decorating soccer cupcakes on Pinterest -- just pipe on green icing with a Wilton tip #233. This tip has multiple tiny holes, so the icing comes out looking like grass.  The trick is to hover the tip right above the cupcake (but not touching it), squeezing the icing bag until icing begins to come up, and moving the icing bag straight up after you stop squeezing the icing bag.  This is truly a foolproof decorating technique; grass is supposed to be messy, so you can make tons of mistakes and it still ends up looking adorable!  I topped the cupcakes off with a foil-wrapped chocolate ball. 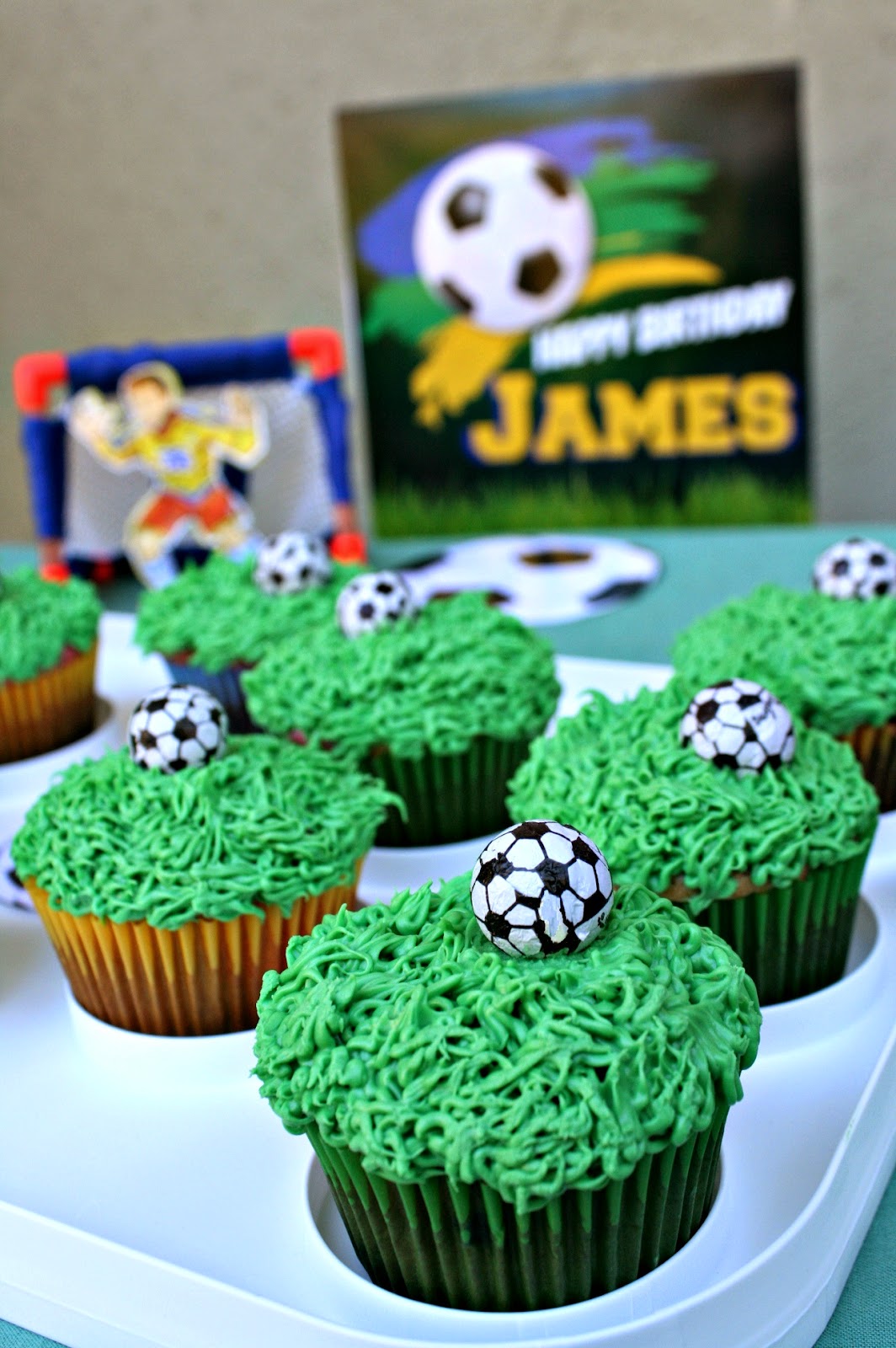 I decided to make a birthday sign to mark our tables in the party area, and make it easy for our guests to find us. I found a nice soccer graphic and added Jammy's name to it, then had 2 copies printed out at a photo center (I could have used our printer, but it wouldn't have turned out as nice). Then I glued both photos onto thin cardboard, and sandwiched a thin wooden stick (painted green) in between the signs.  To make the sign stand up, I placed it in a tall glass jar filled with yellow glass balls.

I brought along a cupcake stand so I could display the cupcakes nicely. They looked so cute that we had lots of little kids wandering up close to stare at it.  I had to keep a close watch on it and make sure they didn't touch the cupcakes or sneeze on them! 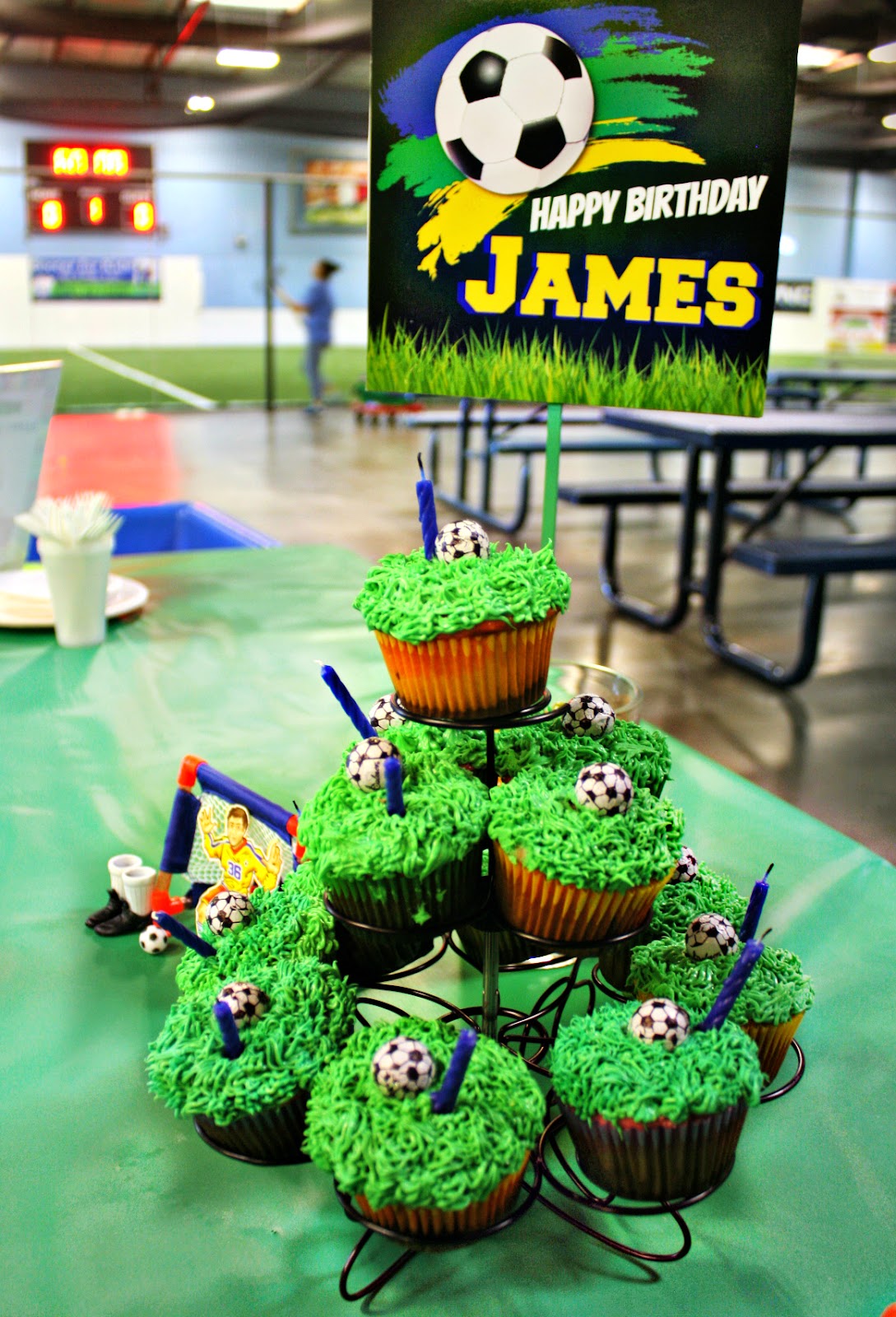 The party activity was simple and sweet: they boys played indoor soccer for an hour.  The party fee included a dedicated sports host who acted as the referree and kept the arguments to a minimum. Like I said, these boys play soccer together at school every day, and in the afternoon they all play for various soccer teams, so the game was fast and furious.  They must have worked up quite an appetite, because after their hour of soccer ended, they demolished all the cupcakes and pizza in a flash.

After the boys finished their pizza, they went wild in the center's jumpy house (yes, eleven year-olds still love to jump!). For those who were all jumped out, I had an alternate activity ready.  I found the funniest little finger soccer kit. It comes with a tiny goal, a plastic goalkeeper, a tiny ball, and tiny rubber cleats that you stick onto your index and middle fingers, so that it looks like a pair of legs.  You try to "kick" the plastic ball into the goal, and your opponent moves the goalkeeper across the goal to try and block your shot.  Everyone loved this!  Naturally, they eventually lost the tiny ball, but fortunately I had lots of spare chocolate soccer balls.

Sports House gave us the choice of water bottles or drawstring sport bags as party giveaways. I chose the sport bags, and filled them with candy, a small rubber soccer ball, and a pair of shades. The boys loved the shades. They put them on, strutted around with them, and blinded each other with their coolness.  The whole group agreed to wear them to school the next day!

Jammy and his friends had a wonderful time! It only takes a few extra touches to make a party extra-special, and it was well worth the effort.