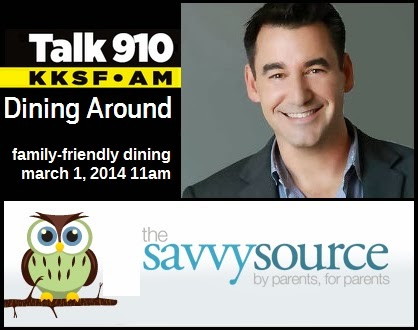 Every so often, an opportunity comes your way that takes you out of your comfort zone.  You know you'll benefit in some way.  You know you'll be glad you did it in the end.  But the thought of actually doing it might be so daunting that you're tempted to pass and settle for the status quo.  What "it" is differs for everyone.  It might be running your first race.  It might be volunteering for the school PTA.  Asking for a raise.  Writing a book. Or in my case, a doing radio interview.


Late Thursday night (I can hardly believe it was just 2 days ago!)  my editor from Savvy Source asked if I wanted to do an interview with Joel Riddell, host of a local radio talk show (Dining Around on Talk910 KKSF AM).  He wanted to talk to someone about family-friendly dining and get suggestions for family-friendly restaurants around the Bay Area.

That should have been easy-peasy, right?  Recommend places to eat and places to go with kids?  It's what I've been doing for years as a City Editor on Savvy Source!  This is my turf!

Yet I hesitated. I've never done this before.  It's one thing to write an article and spend all the time you want crafting a nicely-worded piece; representing yourself as an authority in front of a live audience -- and doing it in a pleasant, well-spoken way -- is something completely different!  I was worried about saying "like" or "umm" too often.  I was worried about losing my train of thought and sounding like an idiot.  I was worried about not being understood.  About being too loud.  Too soft.   Heck, I was even worried about rustling paper or drumming my fingers on the table and making unnecessary noise.

All through yesterday, I thought about making some excuse, any excuse: A last minute soccer game.  A cold. A cold caught by one of my kids. A sudden aversion to driving in the rain.  It's so much easier to spend my Saturday morning lying on the couch and watching tv than getting up early, driving 40 minutes each way to the radio station and spending 30 minutes (20 minus ads) imparting useful knowledge to the general public.

In the end, I couldn't think of an excuse that didn't sound lame, and I didn't want to bow out the night before the show and leave Joel hanging, so I decided to go for it.  I psyched myself up by reminding myself that I've appeared on blog panels and podcasts before, and since it was on radio, I wouldn't even have to worry about my appearance.  I could show up with frizzy hair and notecards to consult; what could go wrong? The interview turned out fine (it starts at minute 19:00).  Joel was so kind and friendly and reassuring.  He guided me expertly from topic to topic.  The whole interview passed by much quicker than I thought it would.  I didn't slur my words or talk too fast or insert too many "Umm"s and "Err"s and "like"s.  I actually sounded like I knew what I was talking about!  I only have 2 regrets:  that I said "Absolutely" way too many times, and that I didn't get to take a photo of Joel and myself (his next guest was ushered in immediately after my segment).

Obviously, I'm glad I did the interview.  I got to see the inside of a radio station, I got to appear live on radio, I've got another media appearance on my resume, I got some great coverage for Savvy Source, and I even got enough material for a couple of blog posts!

The moral of this story?  If you can't find any excuse other than I'm nervous (as opposed to It's Dangerous, I've got a schedule conflict, or I hate Rush Limbaugh and refuse to step into the same room as him), it's probably a good idea to put your big girl pants on and give it a shot.

posted on Saturday, March 01, 2014 Labels: about me
Email ThisBlogThis!Share to TwitterShare to FacebookShare to Pinterest

I can understand your hesitation—this would freak me out too! I'm not particularly good with on-the-spot convo for fear of saying something stupid or wrong. Still, I think if given the opportunity, I would love to do this if only to squash my fear and say I did it. Congrats to you on taking that plunge!