Dear Anti-Gay Person, you're not being a Good Christian. You're being a Bigot. 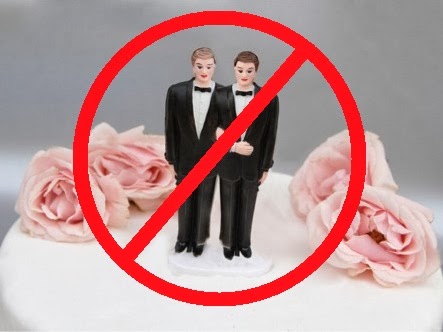 The anti-gay crowd -- especially the self-proclaimed educated, the intellectuals, the rational ones -- are always quick to defend themselves against comparisons with the black civil rights movement.   It's not the same, they say.  We're not like the racists.  African Americans can't help the color of their skin.  Homosexuals have a choice.

But with Arizona's SB 1062 passing both the state House and Senate, just a governor's signature away from becoming law, how can anyone deny the similarity between "No gay weddings" at the florist and  "Coloreds not welcome" at the lunch counter?  Supporters of this bill insist that all they want is religious freedom, the freedom for individuals in business to be able to express their so-called "sincerely held religious beliefs".

What really, REALLY gets me about that argument is that those beliefs don't seem to be sincere at all. "God Hates Gays" seems to be the only way these Christians want to express their so-called "sincerely held religious beliefs". Other kinds of sins? No biggie.

Here's the test. SB 1062 would amend an existing law to give any individual or legal entity an exemption from any state law that substantially burdens their exercise of religion, including Arizona law requiring public accommodation regardless of a customer's race, color, national origin, sex, religion, and disability. So, if the bill becomes law, here are a few scenarios that would be perfectly legal:

* Christian B&B owners will be able to turn away unmarried couples.

* Catholic pharmacists will be able to refuse to sell birth control to ANYONE.

* Christian hospitals will stop performing In Vitro fertilization and fertilized egg storage, and close down all their fertility clinics.

* George Zimmerman will never be served at any restaurant ever again.

I'd be willing to bet that most supporters of SB 1062 would not want any of the above scenarios to occur (except maybe the George Zimmerman one?).  But if their religious convictions were sincere, they SHOULD want these scenarios to happen!  They should be applauding those scenarios!  It seems like Christians will forgive any sin except the "sin" of being gay.

All they want is to be able to refuse to take photos at a gay wedding. So it's not "religious beliefs". It's just homophobic bigotry.  And all of a sudden, they're looking just like racists.

Anti-gay person, you're NOT being a good Christian. You say homosexual acts are a sin? It's in the Bible?  Yeah, racists used to say that too -- they used to point to the Bible as justification for slavery and inferiority of African Americans.   You're not following the Bible.  You're using the Bible as an excuse to discriminate.

posted on Wednesday, February 26, 2014 Labels: rants and raves
Email ThisBlogThis!Share to TwitterShare to FacebookShare to Pinterest

Thank you for sharing your thoughts on this delicate subject.

I am surprised that I still sometimes encounter people who are anti-gay but when pressed for reasons, they just say "just because". For the sake of my sanity, I move away from them and disengage. But my ears get hot from frustration everytime this subject comes up.