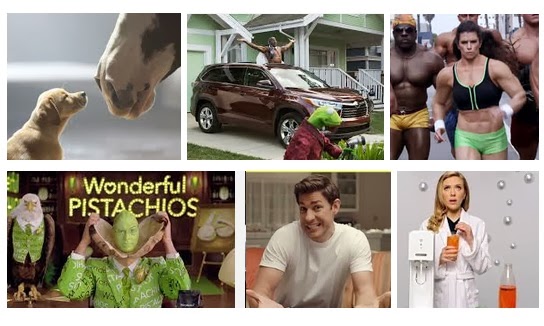 The Super Bowl is probably the only show I ever watch where I don't fast forward through all the commercials.  In fact, I pay more attention to the ads than to the game!  The fact that it was such a one-sided contest this year (Well done, Seahawks!  If you had to beat the Forty-Niners, then I'm glad they lost to the Super Bowl Champs, not the Super Bowl Chumps) made the ads even more important as a source of entertainment. That being said, there were so many ads, I had a hard time keeping them straight!  By the time the game was over, I had forgotten many of them.  A few did make an impression, and I wanted to list them down.

This year's ads had the usual share of hotties (David Beckham!), humor (bodybuilders stampeding to a tanning salon!), and heartstring-pulling (full-blown parades for one guy!).  And they had their share of the Good (Budweiser Best Buds), the Bad (Soda Stream), and the Ugly (66 year-old Arnold Schwarzenegger in a 70's tennis outfit).  Here are my five favorite Super Bowl 2014 ads (along with three runners-up):

Ford Fusion "Nearly Double"
I love it when ads surprise me, and this one really did.  When it came on, I thought, "Oh, no, not another boring car commercial,".  I barely paid attention to it.  When the second one came on, I did a double take (exactly what Ford must have wanted us to do!).   This over-the-top version of the first ad was so outrageous, I can't help giving Ford a round of applause for the cheeky way they parodied their own ad, and the clever way they kept my attention.

Microsoft "Empowering
This ad showed everything that makes me thankful I live in the time that I do, despite the wars and the pollution and the global warming.  Seeing the adorable toddler being able to walk on prosthetic legs, the blind painter being able to paint, and the ALS patient (a former NFL player) being able to communicate reminds everyone that for some people, technology isn't just some cool thing to play with -- it's life-changing.

Cheerios "Gracie"
I was so excited to hear that Cheerios would be airing a sequel to their Cheerios Family ad, because I love it when ads show diversity, and I love it when any causes the minds of racist idiots to explode.  I can't wait for part 3!

Jaguar "British Villains: Rendezvous"
What is it about a cultured British accent that attracts people like a magnet?  Alfie has been using it to score with women all his life (including me), and he doesn't even have the smoldering gaze of Tom Hiddleston.  Is it any wonder that I'd fall for this ad?

Volkswagen "Wings"
The sight of German engineers spontaneously sprouting wings at an assembly plant was hilarious, and the groovy background music made it even more so.

Chevy Cancer "Life"
There were several Chevy ads during the Super Bowl, most of which seemed to be designed to appeal to your America Is Great / This Is America sentiment . But the "Life" ad was my favorite. Just like the Ford ad, this one surprised me.  And touched me.  And touched Jammy so much that he cried.

Coca-Cola "America the Beautiful"
When I first saw the Coca-Cola ad, I thought it was great, because it celebrates what I believe makes America truly great: the diversity of its people.  But it didn't really stand out in my mind until I saw the longer, behind-the-scenes segment on YouTube featuring the people in the ad and their stories.  I loved that Coca-Cola featured a family with two dads, and was truly saddened when people talked about how challenging it can be to fit in.

I didn't even hear about the racist #boycottcoke backlash on Twitter until a couple of hours afterwards  (we started watching about an hour late, so I avoided social media during the game) -- but now that I see the comments of ignorant people outraged at the thought of America The Beautiful (our national anthem, according to some!) being sung in different languages (since Americans should only sing in "American", apparently), I like this ad even more.  It's bringing out all the racists and xenophobes the way the light draws out moths..... so people who are tempted to say "we live in a post-racial world" realize just how much work has to be done.


Did you watch Super Bowl XLVIII?  What were your favorite ads?