Del Monte Plantation, Philippines: home of the sweetest pineapples in the world 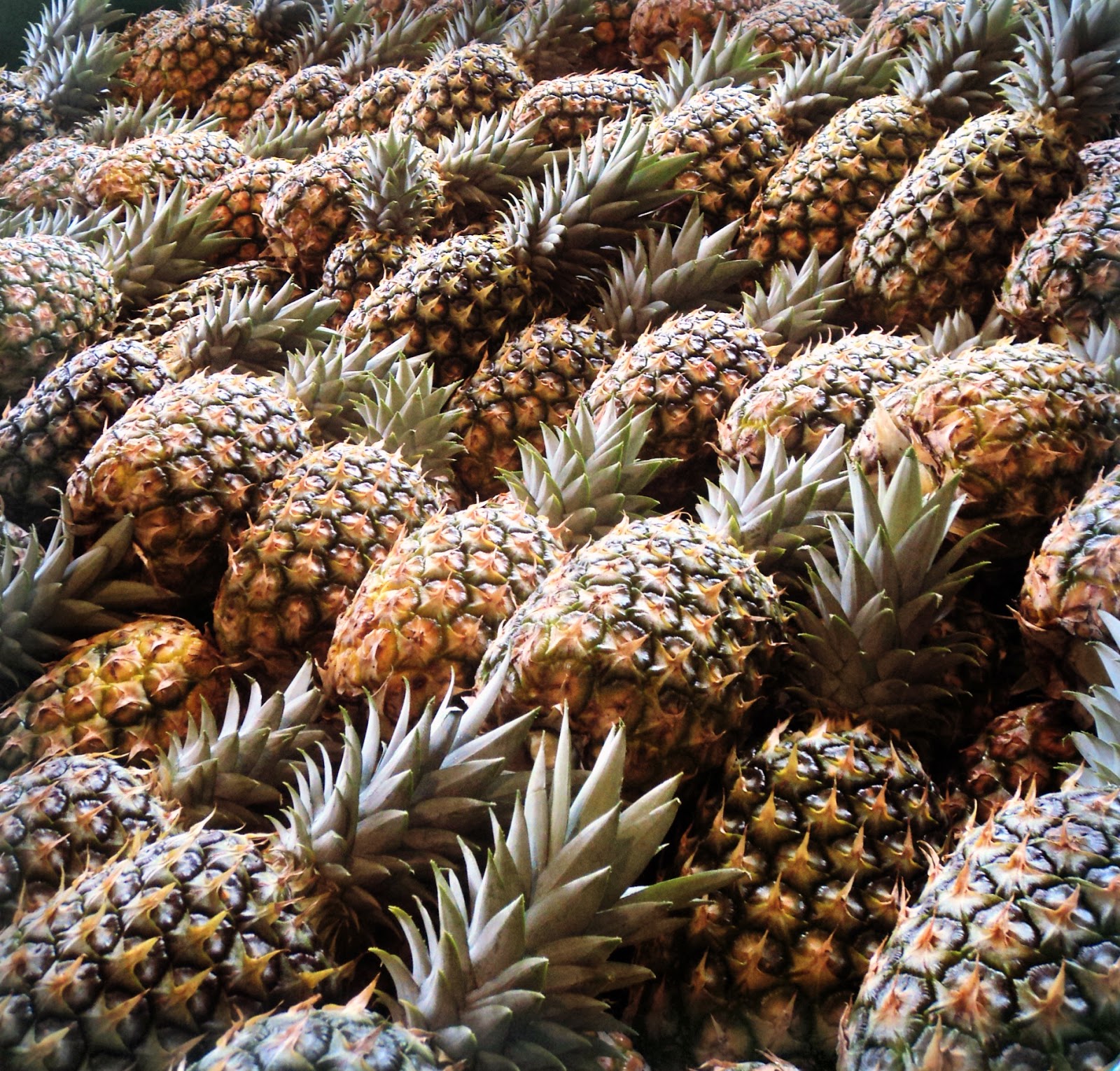 For last week's Travel Tuesday post, I salivated over the best chocolate on earth.  This week I'm traveling to the other side of the world to blog about a different kind of sweet treat: pineapples from the Del Monte Plantation in the Philippines.  Buying a pineapple in the US always a bit of a hit-and-miss venture; sometimes you'll end up with a sweet one, other times you'll end up with a fruit so tart it makes your face pucker.  I know many people who don't bother with fresh pineapples; they're too much trouble and too iffy -- but the pineapples we tasted on the Dole plantation were so good, I would have ripped the sharp rind off the fruit to get to that sweet, sweet flesh.

The Del Monte Plantation is located in the southern region of the Philippines, in the Bukidnon province.  The nearest big city is Cagayan de Oro (when I say "big", it's all relative: CDO's population is about 600,000).  We spent a few days in Cagayan de Oro in 2012 for a cousin's wedding, so my brother-in-law arranged a tour of the plantation with a cousin of his who works there.

The community where the plantation is situated is known as Camp Phillips.  Camp Phillips was originally established by the Americans who ran the Del Monte plantation; they built housing for American expats as well as the local employees.  Camp Philips is open to the public; visitors can drive around the original American housing project, drive through the vast pineapple fields, and buy pineapple delicacies (fresh pineapples, pineapple jam, candy, etc..) from the souvenir store. 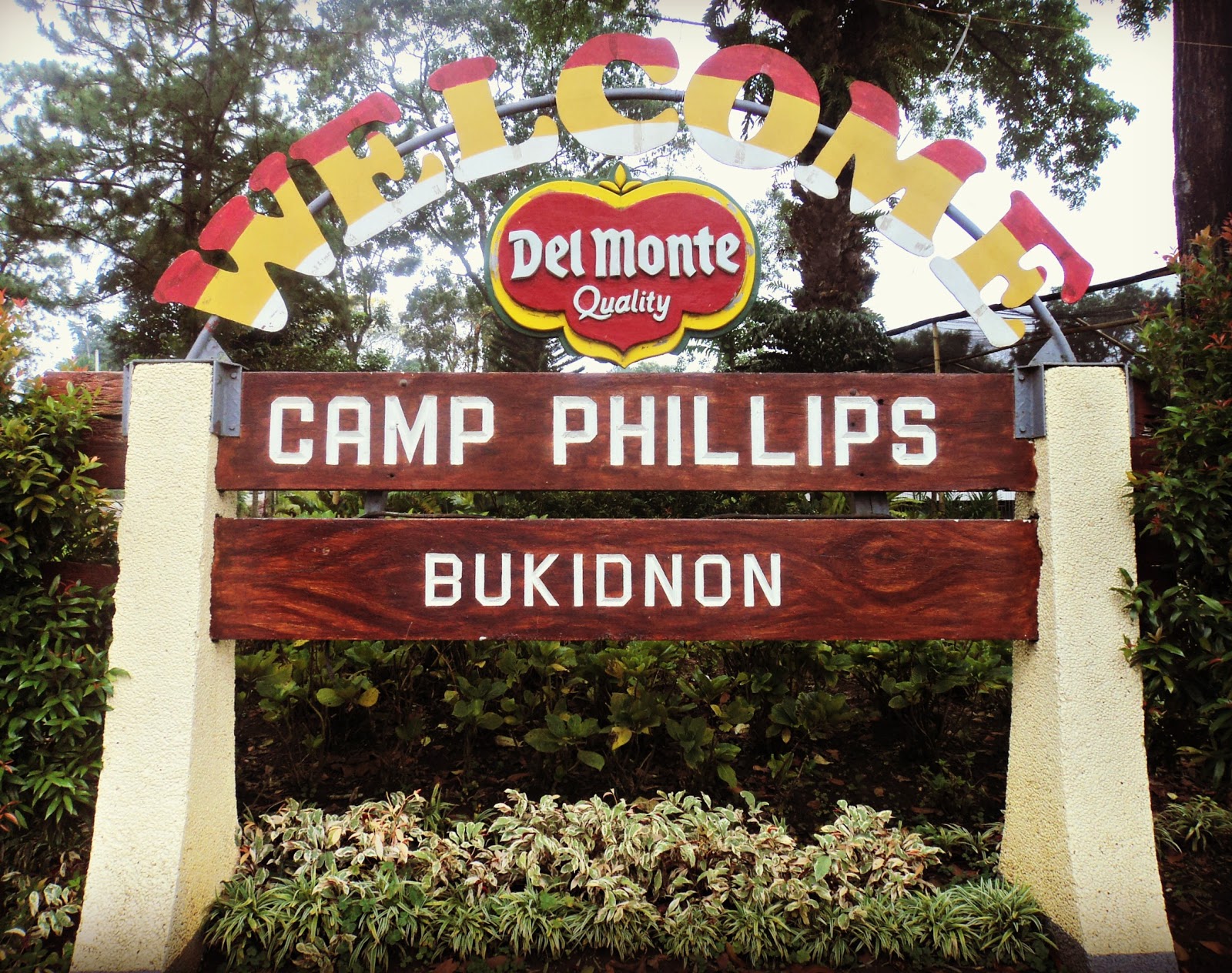 Since Alex's cousin Ben is a manager at Del Monte, we were given a special behind-the-scenes look.  Our tour started at the manager's clubhouse, where management-level employees can have lunch.  The clubhouse has a sedate, old-world air, with lush landscaping and period furniture.  You can easily imagine the old American expats coming here to party after playing a round of golf. 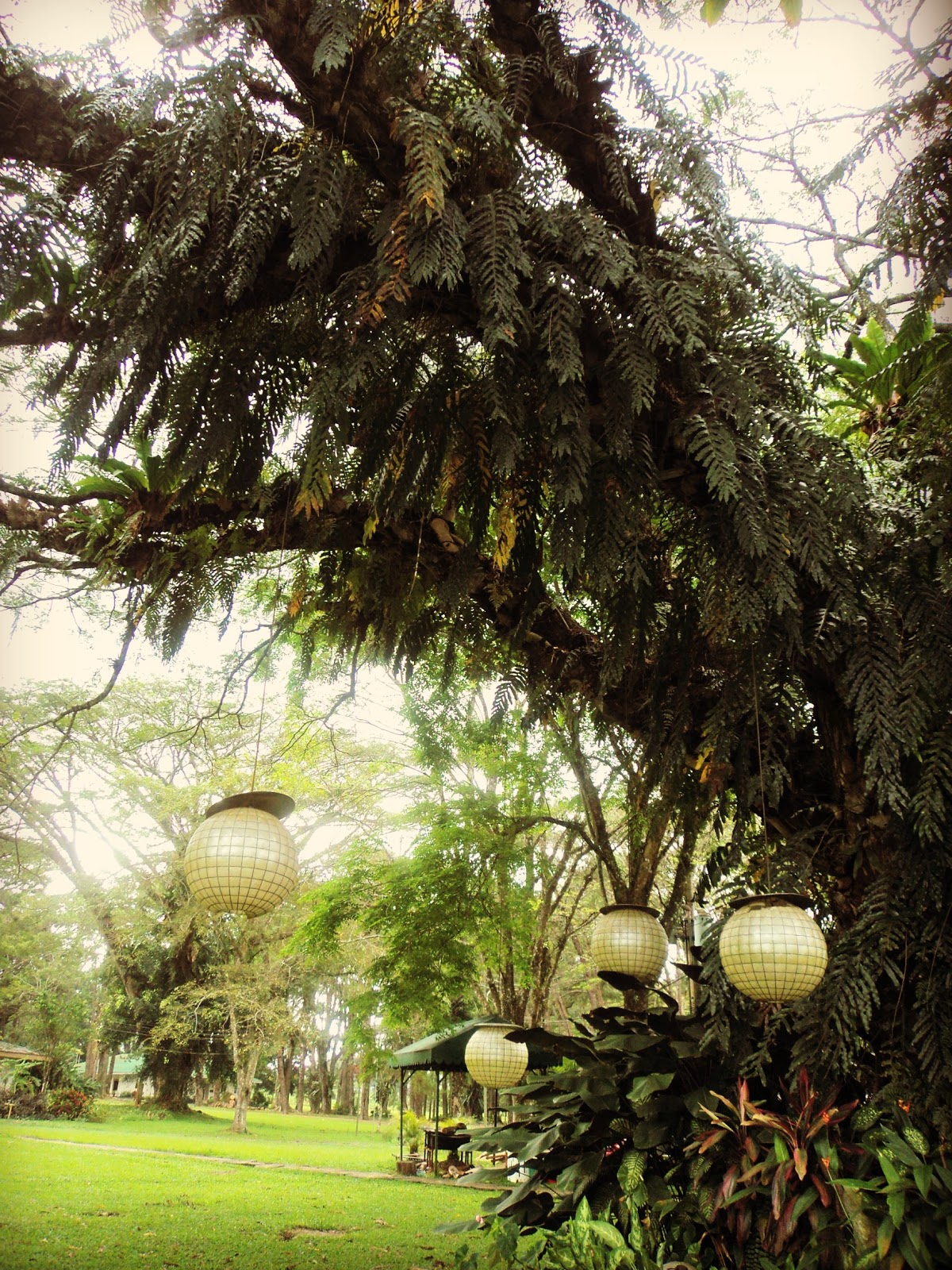 The interior of the clubhouse has beautiful hardwood floors and furniture.  Check out the cool pineapple chair and table set, and the vintage black and white photos on the wall!  We had an amazing lunch featuring tender steak from pineapple-fed cows, the sweetest pineapple spears I had ever tasted, and all the pineapple juice we could drink.  It was one of those lunches that I will always remember. 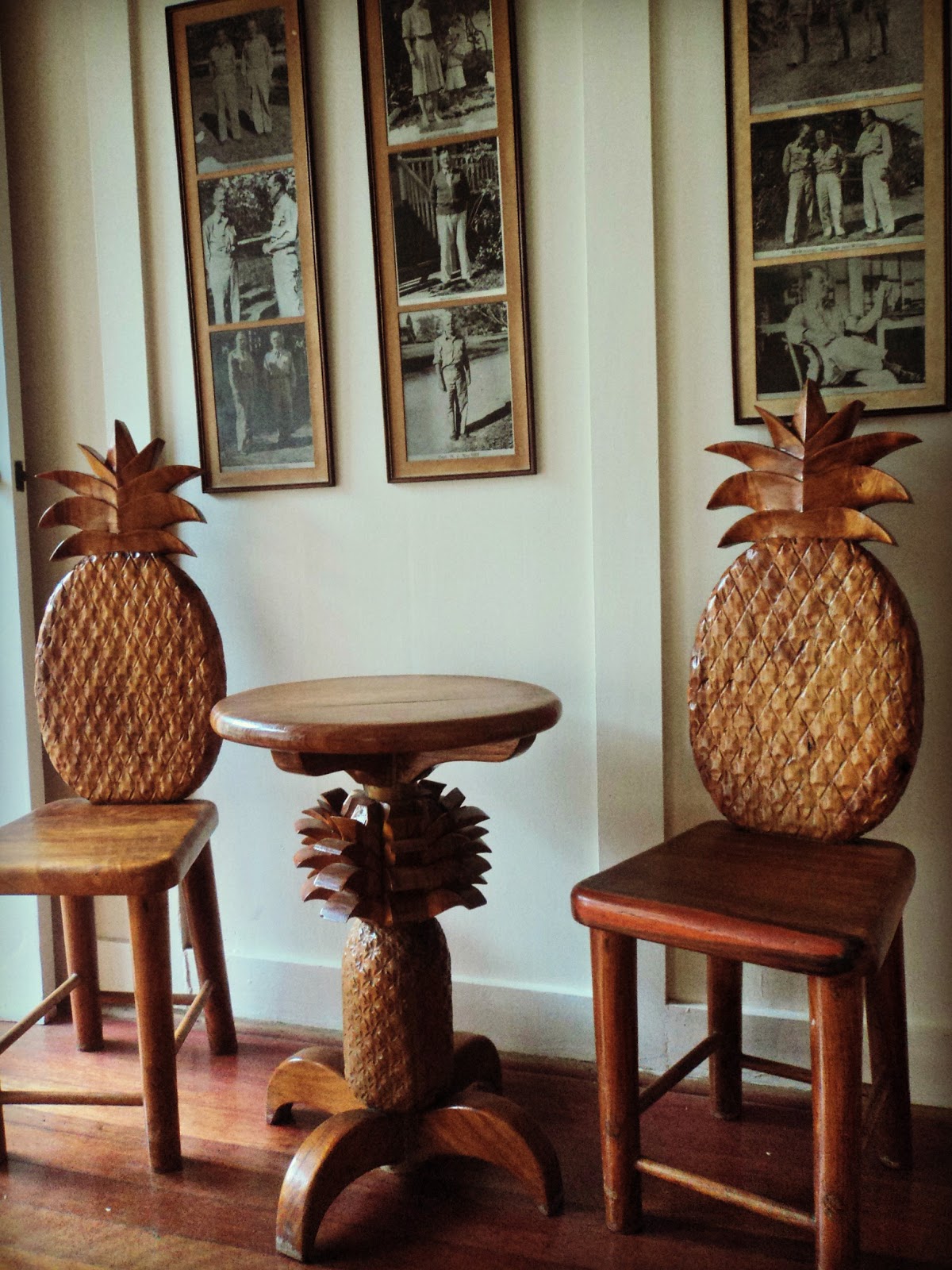 After lunch, we set off and drove through miles of pineapple fields -- nothing but pineapples as far as the eye could see!

We didn't get a chance to visit the actual processing plants (where they can the pineapples), but we did get a tour of their sorting and packing facility, where fresh pineapples are cleaned, weighed, sorted, and boxed, before being exported to countries all over the world. 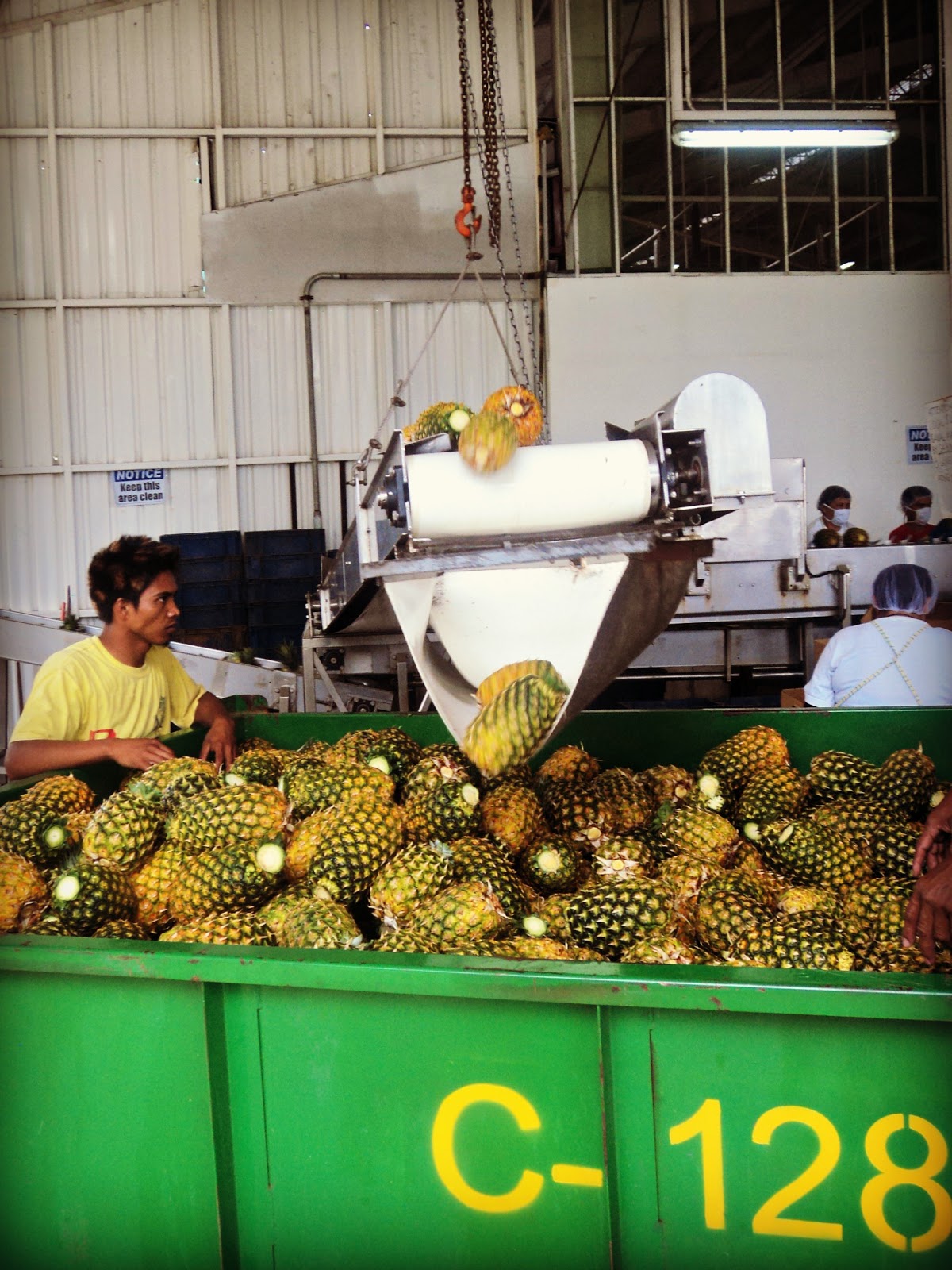 This is the first stop for all pineapples after being harvested from the fields. The pineapples are given a bath and sent on a conveyor belt into the building, where they are weighed and sorted.  The ones that will be sold as whole fruit are packed into boxes, while the ones that are headed to the canning plant have their leafy tops cut off and go back into a big transport bin.  We weren't allowed to take any photos inside, but they let us photograph and video the sorting and cleaning process outside:

After our tour, we were taken a small conference room, where a platter of pineapple chunks was waiting for us.  This was the first time any of us had ever tasted pineapple harvested just hours before, and it was an experience I'll never forget.  I didn't think anything could top the pineapples we had for lunch, but I was wrong. This pineapple was the sweetest I have ever tasted -- it was just like candy!

As we were devouring the pineapple chunks, our tour guide introduced us to the term Brix, which is a measurement of the sugar content in a solution.  Applied to pineapples, it's a measurement of how sweet the fruit is.  I've since looked up Brix values on the internet, and discovered that Brix values for a pineapple  range widely: 10 is poor, 14 is average, 20 is good, and 22 is excellent. If I remember correctly, the Brix value for the pineapple we were eating was 24.

It seemed like just seconds before the platter of pineapple chunks was completely emptied.  I think the kids would have licked the juice straight off the plates if we had been at home.

Since it was December, the plant had a statue of Santa outside the main building.  He's carrying a pineapple, obviously.  Don't make fun -- I'd be more than happy to receive one of those pineapples in my Christmas stocking! 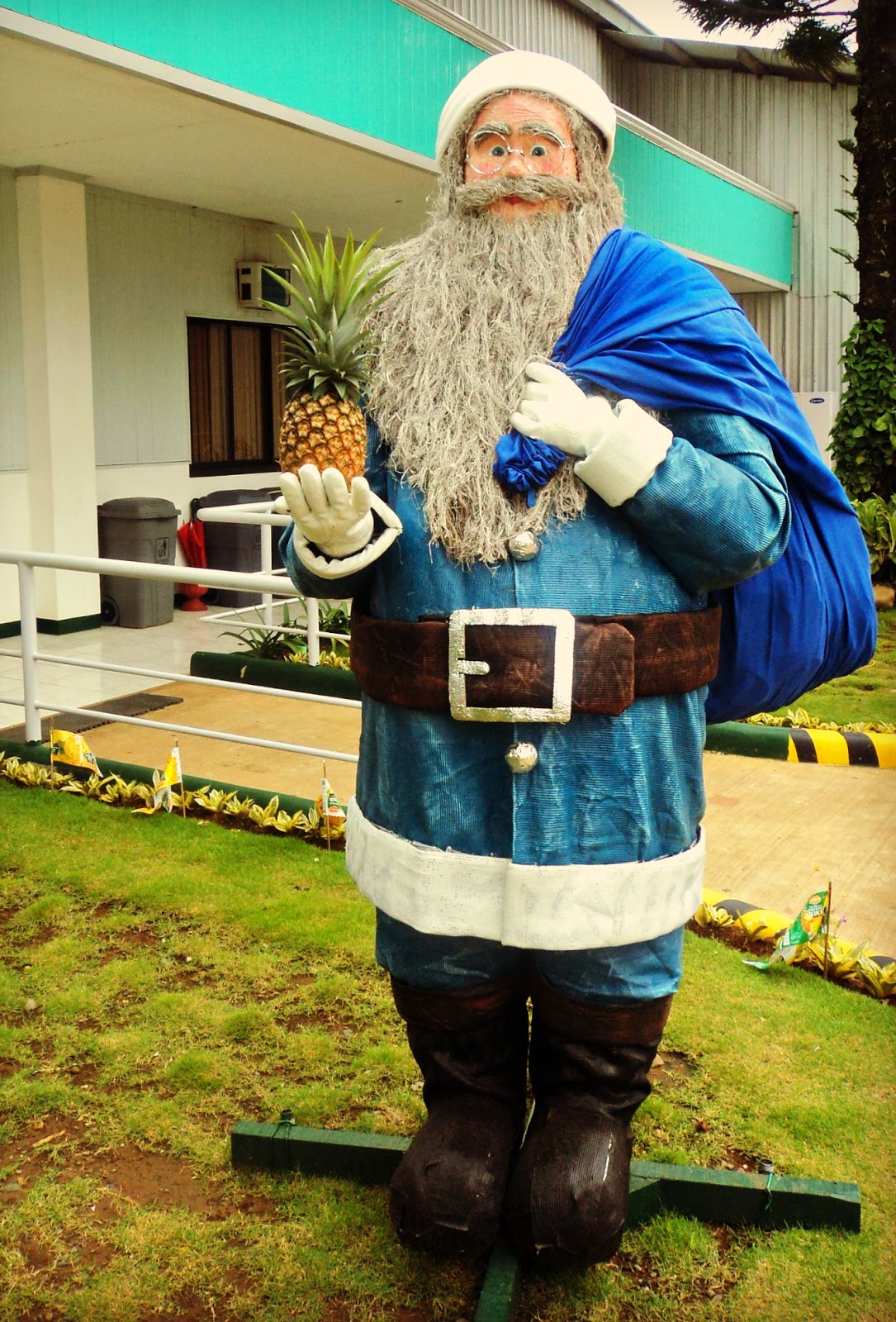 We were on a tight schedule, so there was just enough time to drive through the housing area of Camp Phillips and pose beside the giant pineapple landmark before heading back to Cagayan de Oro. 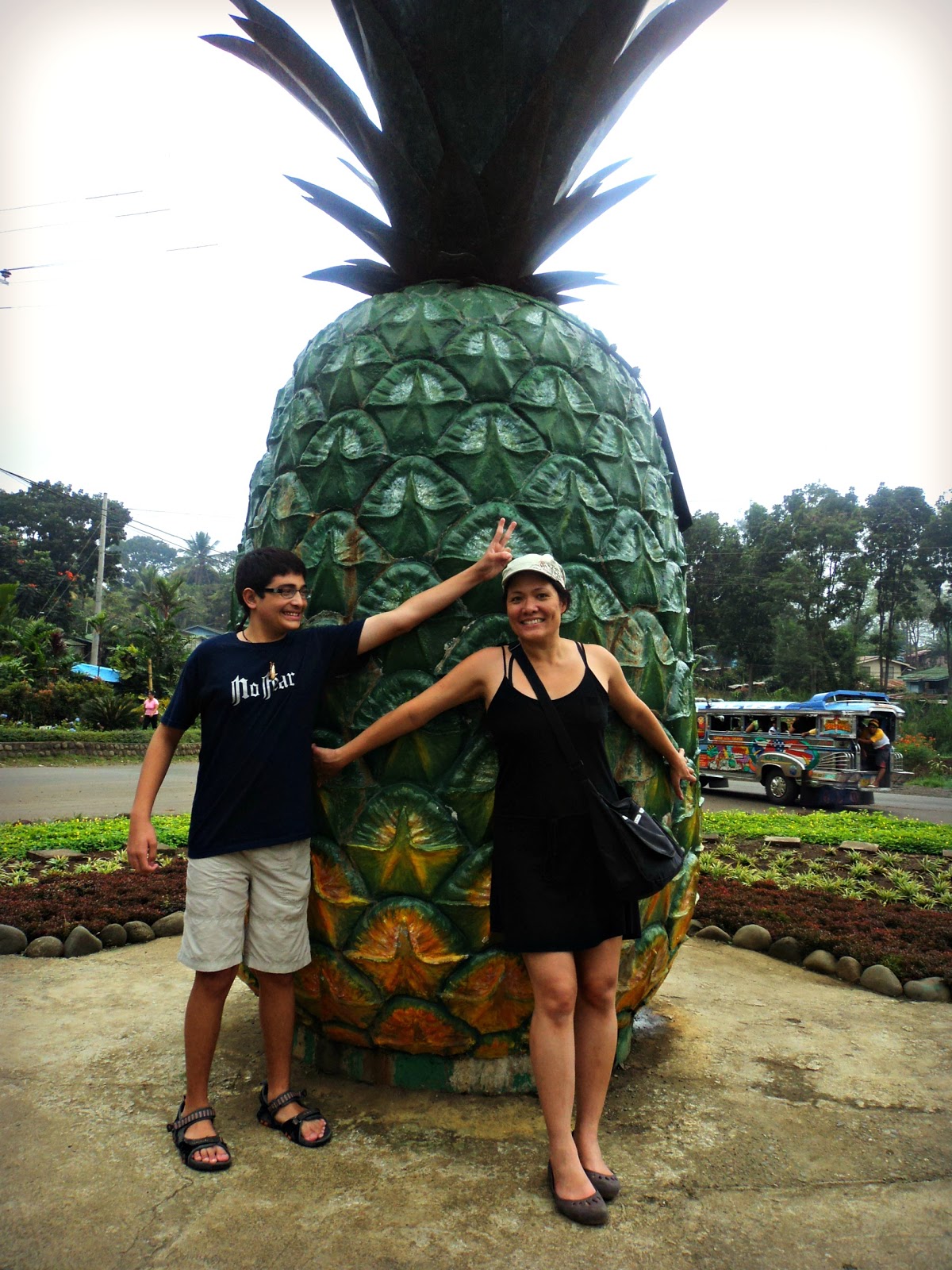 Visiting the plantation was a fantastic experience, with only one inconvenient side effect -- now that we've tasted the best pineapples on earth, every other pineapple we eat is going fall far short.