Day 2 was Hiking Day for the students of the Coloma Discovery School (see what we did on Day 1 here!).  We woke up bright and early at 7:00 a.m.  (actually, the girls in our dorm woke up at 6:00 am because they were so excited, much to the dismay of my dorm parent partner Joanna and I) and fueled up with a delicious breakfast of eggs, sausage, and french toast.  We filled our backpacks with water, sunscreen, snacks, and lunch, met up with the members of our town, and set off to explore the Marshall Gold Discovery State Park and the Monroe Ridge.  The whole camp spent the day outdoors, with each town starting at a different landmark so we wouldn't all crowd into the same location.

Our town's first stop was a replica of Sutter's Mill, where sawmill operator James Marshall discovered gold in the American River and set off the Gold Rush in 1849. 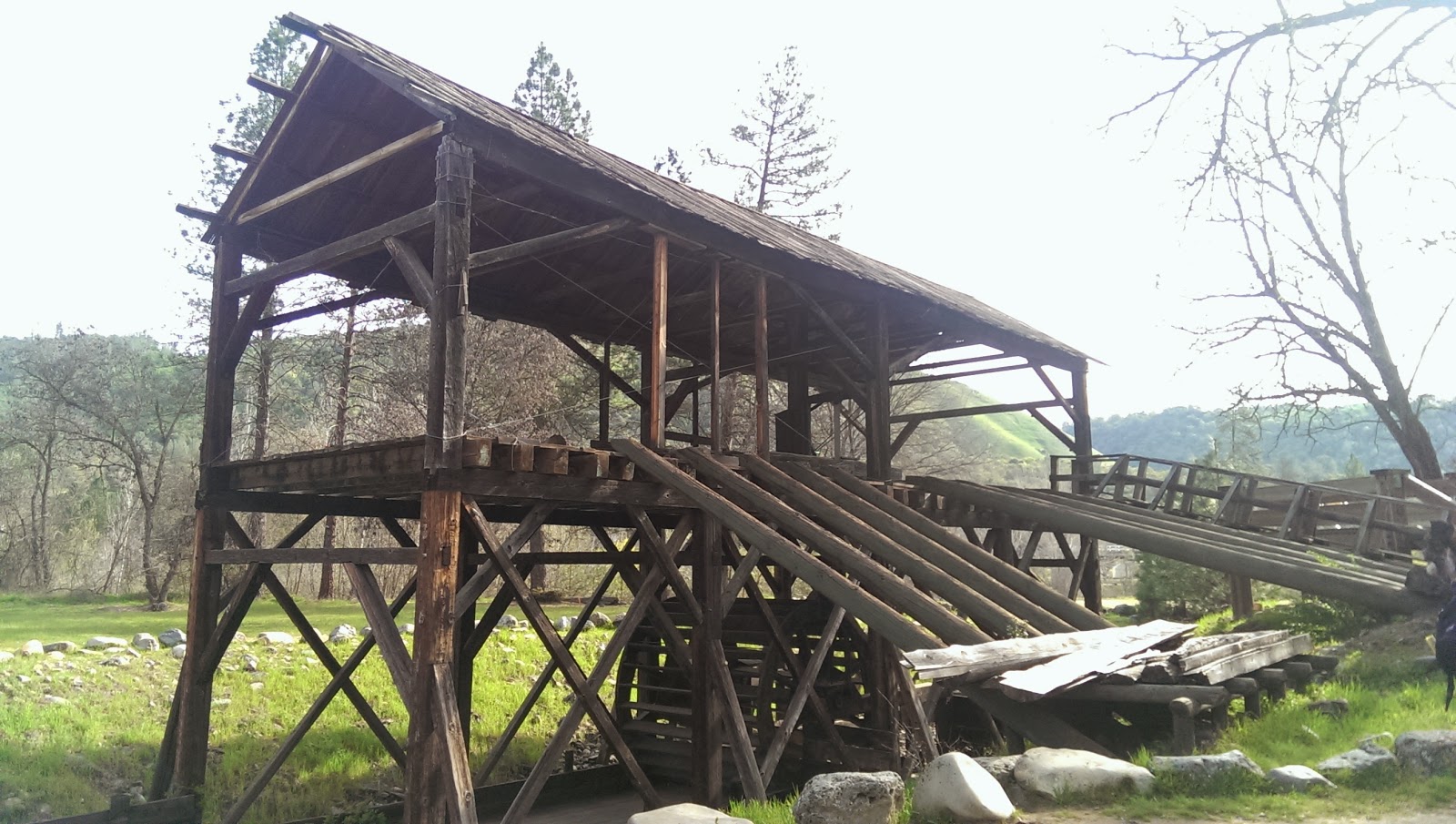 While at Sutter's Mill, we took a break from California history to watch a fun physics experiment. We ran into another town who were in the process of trying out the notion that you can balance an egg on its short end at the precise moment that the spring equinox occurs.  Apparently this derives from the notion that due to the sun's equidistant position between the poles of the earth at the time of the equinox, special gravitational forces apply.  Of course we had to stop and see!  At precisely 9:57 a.m. Pacific Time, the town leaders were able to balance the egg on its narrowest end!  Oh, the cheers and high fives!  Then at 9:58, no matter how hard they tried, they just weren't able to replicate the feat. (note:  I Googled "spring equinox egg" when we got home and discovered that it's just a folk legend.  But it was fun to see just the same).

Next on our agenda was the Gold Discovery Museum, where the kids watched a short film about the Gold Rush (and the adults took advantage of the dark filming room to catch a short snooze), and the Wah Hop Store, a Chinese general store where miners bought their supplies (Did you know that a single egg cost $5? That's what I call supply and demand at work). 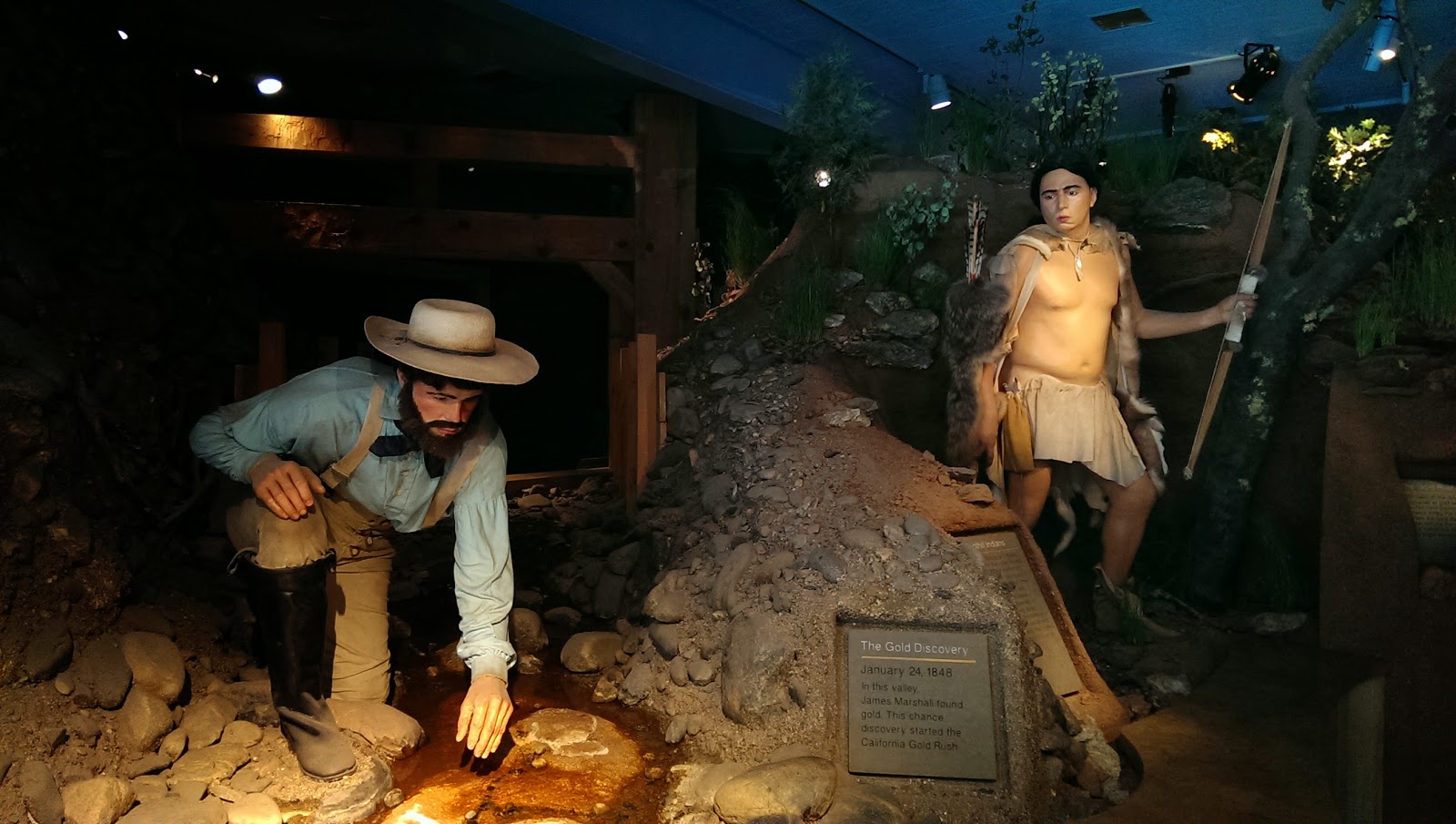 By this time, it was mid morning, and we sat at some picnic tables to snack on some apples.  Our town leader challenged us to eat our apple the way the miners would have eaten their apples in 1849 -- the whole apple, stem, core, seeds, and all.  All of the boys and most of the girls (including me!) rose to the challenge.  The trick is to eat the apple from the bottom up or the top down, not round the sides like you usually do. Eating the stem is kind of tricky, but if you include some apple flesh with every bite, you can manage it.

The Monroe Ridge Trail is only a 2.3 mile hike, but it's a rough trail, and parts are moderately strenuous, with inclines steep enough to require quite a few switchbacks.  We kept an easy pace, but there we definitely heard the dreaded "Are We There Yet?" and "How Much Farther?" more than a few times.  Our town leader kept the hike interesting by choosing 1 or 2 students, pointing out facts about the local plantlife to them, and asking them to teach what they had learned to their fellow students.  A portion of the hike was done in total silence, with kids hiking single file and spaced 20-30 feet apart, so they could appreciate the sights and sound of nature instead of chatting with their friends (naturally, it was the parent chaperones' favorite part of the hike!)..

Once we got to the highest point, we were rewarded with lunch -- as well as some beautiful views of Mount Murphy and the American River. 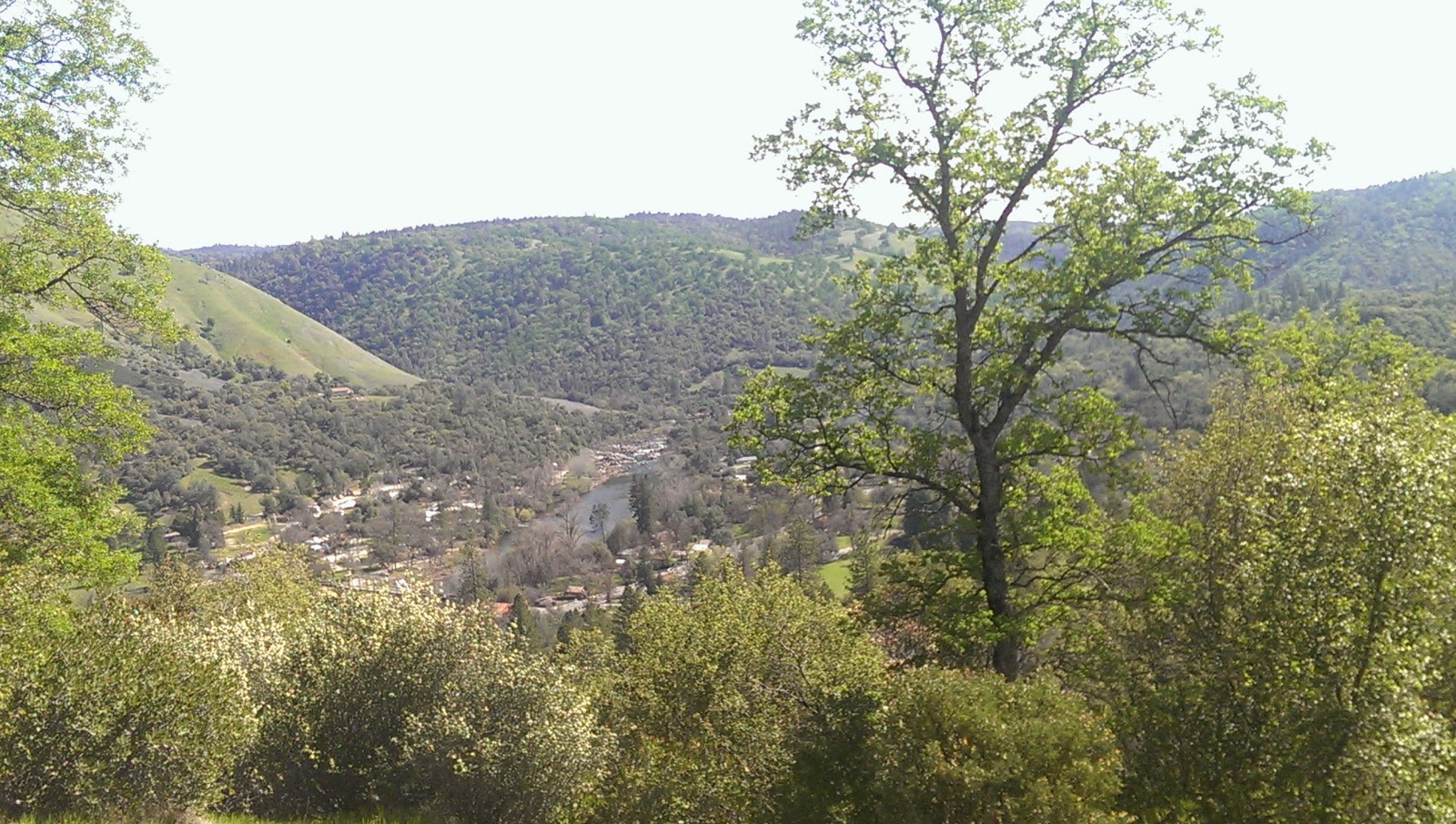 On the way down, we stopped by the Marshall Monument (where James Marshall, is buried), Marshall's old cabin, a church, a cemetary, a working blacksmith's shop (where craftsmen were shaping iron the old fashioned way), and some historical houses and buildings.  The kids were blown away when our town leader told them that one of the houses we saw cost $150 in 1849... and that Nancy Gooch, former slave and matriarch of the Monroe Family (whom the Monroe Ridge Trail is named for), was able to save a whopping $900 and buy her son's freedom from slavery and bring him from Missouri to Coloma.

One of the last places we passed on our walk back to camp was an old fashioned cafe and coffee shop.  The smells of coffee and buttered pastries drifted out the door, and I just wanted to duck inside for a few minutes and rest my aching feet. 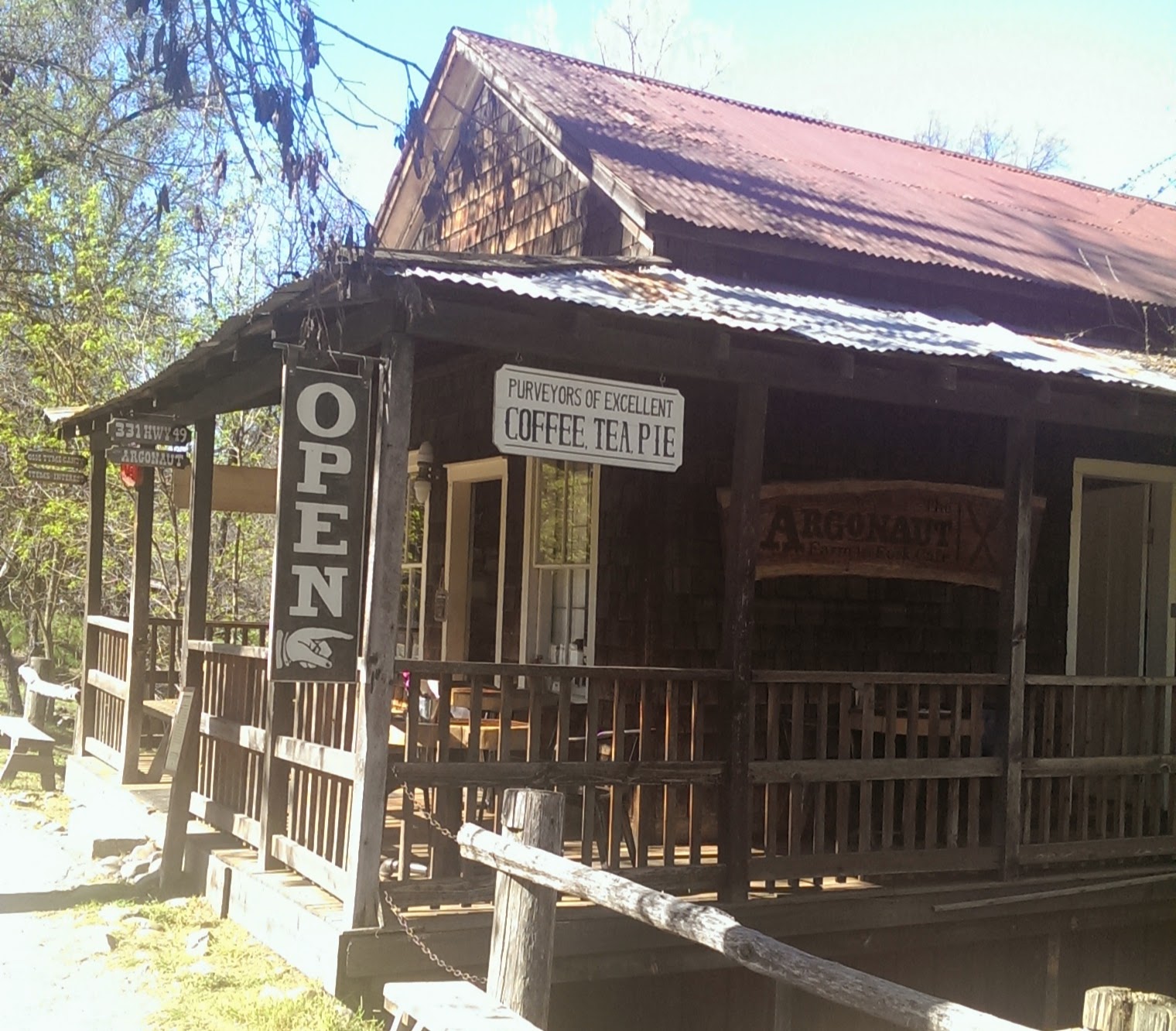 It was close to 4:00 PM when our group finally trudged back camp, all dusty, dirty, and tired.  We were given an hour and fifteen minutes to rest and shower, but unbelievably, over half the girls opted not to shower.  I had been fantasizing about a hot shower for the last hour, so I just could not wrap my head around that (is that proof that I'm a clean freak, or that I'm just too old to appreciate the joys of living the rough life?). I tried my best to convince them how much better they would feel.... but showers were optional, so the girls rested in their bunks while my parent dorm-mate, Joanna, and I took turns showering, accompanying the girls who wanted to to shower, and monitoring the girls who opted to stay in the dorm.  Showers may have been optional, but they certainly weren't for 3Po and Jammy -- I took full advantage of accompanying my sons on this trip to seek them out and ORDER them to shower.

Dinner that night was super yummy, spaghetti and garlic bread, with brownies for dessert.  All that carb loading must have given the kids an extra shot of energy, because they spent after-dinner free time playing as though they had been hiking for an hour instead of an entire day.   Kids were racing up the tire hill, sliding down....

... rolling hoops, shooting baskets, climbing rocks, panning for gold, and running around with the kind of joy that makes grownups wish they were kids again.

The evening activity was slightly less sedate than the first night's hoedown, but just as interesting. Everyone gathered around the campfire area to listen to Native American Mary Talking Hands play some Native American instruments (some of which she had made herself) and lead the kids in a few songs.  Mary regaled everyone with several ancient Native American folk tales including how the jackrabbit got his long ears and bushy tail, and why dogs chase jackrabbits.  By the time she told her last tale, the sky had gone dark, and the stars had come out, and the campfire lent everything a warm glow.  It was the perfect way to spend our last night in Coloma.

Even fourth graders have a limit to their energy, and by the time Mary's storytelling came to an end, I suspect the kids had nearly reached theirs -- after tooth brushing time, our girls were content to lie on their bunks, read their Day 2 parent letters, and drift off to sleep without too many giggles and whispers.

Our adventure's not over yet, we still have 1 more day to go!  Stay tuned for Day 3 of our Coloma Outdoor Discovery School trip report.