Like many bloggers, I hate voting contests.  I hate the idea of tying your worth to popularity and I hate asking people to vote for me.  So when the Circle of Moms Top 25 NorCal Moms list opened up, I felt a bit hypocritical about asking people to vote for me. I was feeling a bit low because one of my regular blogging gigs had just informed me that they would no longer need me.  I think I needed a bit of a confidence boost in the form of a badge.  I could at least display it to brands and PR agencies to let them know I was someone worth working with! Just this one time, I thought.  I probably won't get in anyway.


I tried to keep my conscience clear by limiting the number of people I asked for a vote.  I wrote one blog post, one Facebook post, and one tweet.  No matter how tempting, I refrained from posting anything about the contest on my Facebook page: no announcements, no daily or weekly reminders.  I did email about 10 family members, 10 college friends and 10 friends from my kids' school. 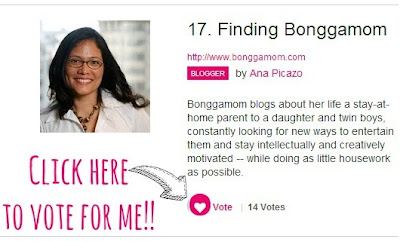 So I was totally unprepared for the number of votes I ended up getting.  Miracle of miracles, I finished the contest in THIRD PLACE, with 802 votes! 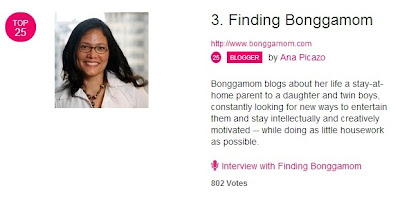 The only people that I knew for sure were voting for me regularly were Alfie (when I reminded him), my aunt and my dad. But I had blog readers, third cousins, and old friends emailing me to say they voted, wishing me luck, saying didn't mind if I reminded them every day (I didn't).  I think it helped that you don't have to register or leave any personal information in order to vote. I know it helped to belong to networks of bloggers who voted for each other in the most supportive way.  And I know it helped to have a lot of relatives in the Philippines (did you know that Filipinos are among the most active social media users in the world?).  And they all pulled together to gift me with the nice shiny badge at the top of this post!

I know, it's a voting contest.  It doesn't reflect blog readership, ranking or traffic.  I know that being on this list doesn't make me the Heather Armstrong of Northern California.  I'm well aware that there are any number of mom blogs who could get more votes in a day than I got during the whole period, without even trying, had they bothered to throw their names into the hat.

But I'm so proud of making this list because it has shown me how many wonderful readers, supporters and friends I have.  I really appreciate the time you took to click on that little pink heart button.  I promise I won't bug you for votes again (well, maybe till next year!).

posted on Wednesday, August 14, 2013 Labels: about me
Email ThisBlogThis!Share to TwitterShare to FacebookShare to Pinterest