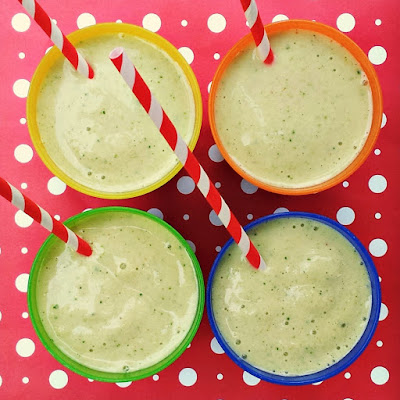 Spinach is one of my favorite vegetables.  I use it in salads, scrambles, soups, sandwiches and a few more dishes that I can't remember at this moment (probably because they don't begin with "s").  But I never really thought about using it in a drink (spinach to sip!) until the advent of Pinterest.  The prospect doesn't disgust me (Naked Juice's Green Machine, which has spinach, broccoli, wheatgrass and other good stuff, is one of my favorite storebought smoothies ), I've just never thought of making it for myself.

I've been seeing tons of drink recipes featuring spinach on Pinterest lately, probably because we recently celebrated St. Patrick's Day, so people were pinning anything and everything green.  From what I can tell, the recipes are basically fruit smoothies with spinach tossed in.  So I decided to make my own.  You can add amounts to taste, but here are the proportions I came up with:

Blend everything together.  This amount pours almost perfectly into five IKEA-sized cups, one for each member in our family.  I started with 10 spinach leaves and worked my way up to 1 cup, and if it weren't for the light green color and deeper green flecks, you wouldn't know there was any spinach in the smoothie at all. 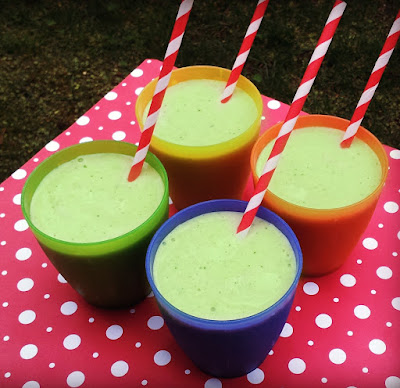 Sip and savor your spinach slowly!