Do you sneak veggies into your kids' food? 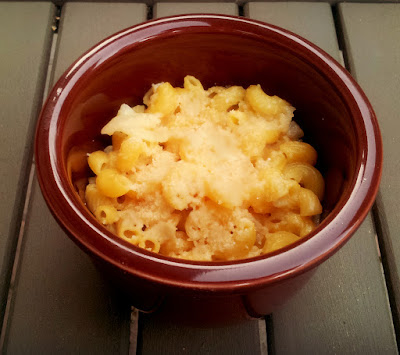 Who doesn't love macaroni and cheese?  You can make it less junky by adding pureed cauliflower and using whole-wheat pasta or pasta with veggies already in it.


My kids are good about eating vegetables.  I serve vegetables like tomatoes, cucumbers, all kinds of lettuce, cauliflower, bell peppers, carrots, chickpeas, butternut squash, green beans, celery, mushrooms, onions, avocados, olives and more every day, and they will happily eat them.  But it wasn't always so easy.  When they were younger and in their picky phases, it took a lot of patience and cunning to get those veggies in!  Here are some of the strategies I used to get them to try vegetables:


* Whenever I served an unfamiliar item, I never forced my kids to finish it, but I always asked them to try at least 1 bite.

* I smothered the veggies in cheese -- anything tastes good with enough cheese! -- and gradually reduced the amount of cheese.

* I served veggies again and again and again.  And again.  In different dishes.  Alone.  With cheese.  With a dip.  With butter and salt.  Prepared in different ways.  Paired with different foods.  I read somewhere that you have to present a new food to a child multiple times -- four? five? six? -- before he or she will accept it.

* I "hid" veggies in their favorite dishes -- for example, cauliflower in mashed potatoes or mac-n-cheese, spinach in brownies -- then asked them how they liked it. If they said they liked the dish, I would reveal the hidden veggie and praise them for eating it!


I know there's some controversy about that last technique, i.e. "sneaking" nutrition into kids by "hiding" veggies in kids' dishes, but I have no problem with it.  I'm a big fan of Jessica Seinfeld's Deceptively Delicious book as well as any brownie recipe with spinach or zucchini in it.  Yes, it's a bit of a deception.  But hey, you tell your kid there's a tooth fairy and Santa Claus, so why not let him think that his macaroni and cheese is anything but macaroni and cheese?

For me, the bigger issue is that hiding the veggies does nothing to help teach your child to like veggies.  But you can always tell your child he was eating sweet potatoes or cauliflower after your child has wolfed down the whole thing.  If the dish is really good, he's probably not going to spit it all out once he realizes he has actually eaten a disgusting looks-like-a-brain cauliflower.  He might even be proud of the fact that he can now eat cauliflower (especially if you hype up the praise!).  You might even be able to increase the amount of the "hidden" vegetable until you can actually taste it.

Note: Even after all my efforts, there are still vegetables that my kids don't like.  I'm putting that down to individual preferences and I don't force them.  I honestly think that if you try hard enough, you can get ANY kid to like veggies: not every single vegetable on earth, but enough to give him a healthy diet.  But I know kids who won't eat any vegetable.  Not just toddlers but bigger kids, age 8, 10, 15, 16.  Rather than judge the parenting style that resulted in said picky kids, why not just be happy for the kids' sake that they can get the nutrition of veggies, even if their parents have to resort to hiding the veggies to do it!


Shameless self-promotion time -- speaking of hiding veggies in kids' food, check out my review and giveaway of Golden Grain Hidden Veggies pasta!  It's pasta with veggies that tastes like regular pasta, and I've become a big fan.

I like the cauliflower in mac n cheese idea. Will have to try it!