Under Stone, Over Sea: Crossing the English Channel 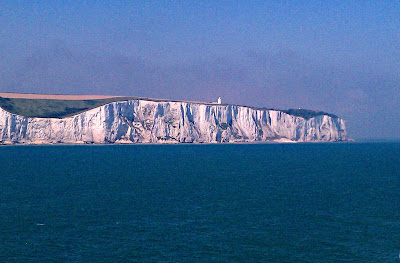 Whoever it was who said it's the journey that counts, not the destination, must have said it while crossing the English Channel in a car with his family.

When you're driving from England to France, there are two ways to cross the English Channel: sail over it on a boat, or drive under it, by boarding a train. We've had the chance to do both with our kids, and they were far and away the best parts of the journey: not once during either drive were we subjected to the dreaded "Are We There Yet?".

The first time we crossed the English Channel was in 2010, when we took the kids on a road trip to Paris. We started out from Alfie's parents' home in Wiltshire County, about 90 miles west of London, and drove to the southern English coast, where we boarded the Eurotunnel, a drive-on-drive-off train that shuttles vehicles through the Channel Tunnel. 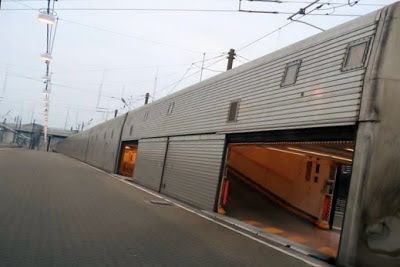 The UK end of the Channel Tunnel is at Folkestone, a town on England's south coast. Vehicles arriving at the Eurotunnel station have to stop at a toll booth to show their tickets. They are given a tag to display on their windshield that shows their assigned train, and departure time. If you arrive 30 minutes or more before your scheduled departure time you can wait at a departure terminal, which looks like a small international flight terminal with restaurants, duty-free shops, restrooms and monitors that show which trains are boarding. When your turn comes to board, you get in your car and drive through a series of immigration and security tollbooths, where you show passports for everyone in the vehicle. Attendants guide vehicles through boarding lanes and onto the train. 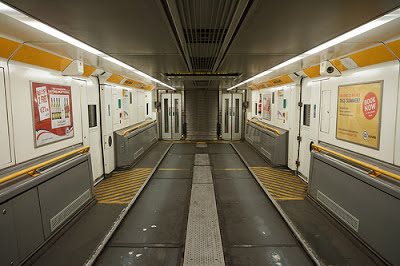 The train itself is long, with an upper and lower level.  Each train car has huge entry doors and ramps so that cars can drive directly onto the train. The upper deck has a lower roof, so only smaller passenger vehicles can fit; larger vehicles like tour coaches or moving vans stay on the lower deck. The inside of the train looks just like a subway train without seats (my kids said this is exactly the kind of train Lightning McQueen would ride!) Roll-down doors close the vehicles off into sections of 4-5 cars each, with doors for passengers to move between cars.

Veteran Eurotunnel riders usually stay in their vehicles for the 30-minute journey, but the kids were too excited to stay put! They got out and walked around our car (there are handrails and walkways on either side of the car, as well as stairs connecting the lower and upper level), peering through the windows. The train runs above ground for about five minutes on either side of the Channel Tunnel, so the kids get to see a bit of the countryside. Once inside the tunnel it feels just like you're on a subway train. The kids had a blast, and our Channel crossing ended far too soon. 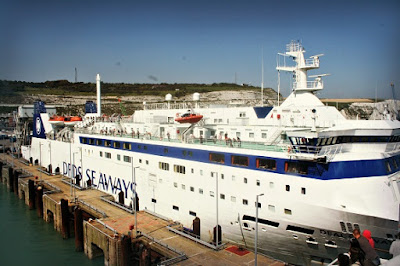 We did our second Channel crossing last summer, driving from England to Calais, then on to Belgium, where we spent a week pigging out on chocolate and fries in Bruges and Brussels. Alfie's parents came along for the trip, and since my father-in-law suffers from claustrophobia, we made the Channel crossing less traumatic for him by taking the Eurotunnel on the drive to Belgium, and crossing by ferry on the drive back. This was a major concession on my part, because I suffer from seasickness, but if my father-in-law could endure a train ride battling claustrophobia, I figured I could endure a ferry crossing, even if I had to spend the whole time tossing my cookies over the side.

Fortunately for me and my father-in-law, both crossings were uneventful, and by that I mean no panic attacks or projectile vomiting. The Eurotunnel crossing was just as smooth as we remembered it from two years ago (even my father-in-law admitted that it was no worse than being on a subway train), and on our way back, the sea gods took pity on me and blessed us with Channel waters as smooth as glass.

There are a number of ports-of-call on either side of the Channel: Portsmouth, Poole, Newhaven and Dover on the English side, and Dieppe, Cherbourg, Calais, and Dunkirk on the French side. The Channel is narrowest between Dover and Calais, so that route gives you the shortest journey, but we decided to board our ferry at Dunkirk, the seaside town that was the location of one of the most famous battles of World War II. This meant less driving for Alfie, and more time at sea for the family to enjoy. 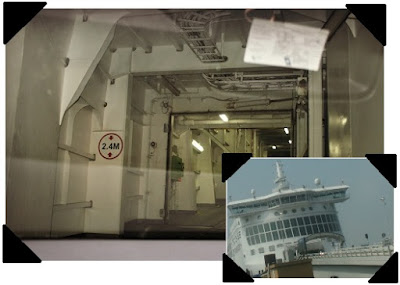 The pre-boarding process for the ferry is a lot like the Eurotunnel: drive-through tollbooths for tickets and passports, a terminal for earlybirds, lots of lanes and ramps to guide you onto the ferry. 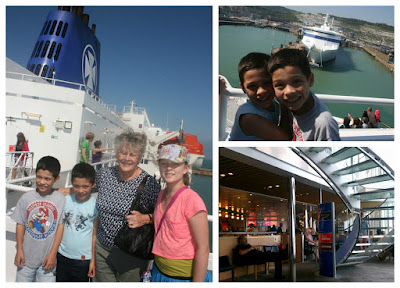 Once you drive onto the ferry, the similarity ends. Vehicles work their way through the ship's innards and eventually end up in what looks like a giant underground parking lot. Vehicles are crammed in with little space to spare, and passengers are required to leave their cars and stay in the passenger area for the whole journey. There was a kids' playground, a couple of restaurants, a lounge area with tv screens, a duty-free store, and a video game arcade. It was a nice, sunny day, so we were able to go up on deck and enjoy the sea breeze, so even though the crossing took 2 hours instead of 30 minutes, the kids had a lot more fun.

The highlight of the journey was seeing the famous White Cliffs of Dover appear on the horizon as we approached the English coast. Time seemed to fly by (or rather, sail away), and before we knew it, we were docking at Dover, driving off the ship, and heading home.

In retrospect, it's difficult to say which crossing our family enjoyed more. The ferry journey was scenic and entertaining, but the train journey was quicker and "cooler". I'm just glad we experienced both.

This post is part of BlogHer's Family Fun on Four Wheels editorial series, made possible by Mazda CX-9.