Taking back the decor 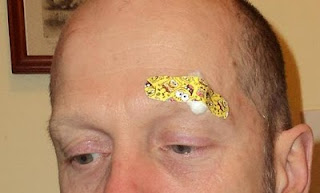 Last week Alfie banged his head on a door and split his forehead open. The only kind of bandage we could find was a bright yellow Spongebob Squarepants Band Aid. He almost didn't want to go to work the next day because of it.

Unfortunately, that's just one of the many hazards of parenting we've had to face in the last decade, and I'm not talking about Alfie's split cut (although the accident was a direct result of being a parent: he tripped over a gigantic foam moon that the kids had left in the middle of the room). I'm talking about the gradual erosion of the tasteful environment you built for yourself in the BC (Before Child) era. If you're not careful, garish cartoon characters like Spongebob, Barney and Dora will slowly take over your household decor, your appliances, your toiletries and your life. Not your kid's life, yours. I defy any parent to swear that he or she has not done at least one of the following:

Me? Guilty as charged. I've done every single one of those things, and more. But enough is enough. Who do they think rules the roost?

Last year I took a big leap and stopped using those melamine kiddie bowls for the kids' breakfast cereal. They now use regular dinnerware for their meals. This year I plan to do the same for their silverware; I need to go shopping for more forks, spoons and knives, but once I get around to doing that we can throw away their Hello Kitty spoons, Buzz Lightyear forks and chewed-up sporks. It's time our dinner table stopped looking like a daycare center and started looking like a dinner table.

That is, until 3Po turns his angelic face my way and says, "Pleeeeeeeeese, mama, can we buy these Bakugan Band Aids?"
posted on Friday, January 14, 2011 Labels: parenting
Email ThisBlogThis!Share to TwitterShare to FacebookShare to Pinterest

We quit using the plastic kiddie dishes when Charlie was 4. It made him feel more like a "big kid" to use plates like Mommy & Daddy which encouraged better dining behavior.

Band-Aid though, Hubby went and bought some just for our bathroom because he didn't want to wear a Thomas the Tank Engine one.

Now to encourage the family room to not look like Toys R Us exploded.