Jammy hasn't been feeling well all weekend, so he was overjoyed last night when I pronounced him fever-free for 24 hours and gave the green light to attend summer camp. So I was slightly surprised to find him subdued and tearful this morning. I took his temperature and all was normal, but he said his leg hurt. Alfie and I assured him that he had probably cramped up in the night from sleeping in one of his weird positions and the pain would go away.

He hobbled downstairs for breakfast and insisted that he was still in pain. He was somber and his voice quavered, and after a number of comments I began to suspect what was really ailing him:

Maybe I should skip this first day of camp and rest my leg.
What if I can't run around during recess and lunch?

What if I don't have any fun?

Can you come to camp with me?

So I did what any parent would do. I medicated him.

Here you go, Jammy. Here's some medicine that will take away the pain. It might take 30 minutes or so for the pain to go away but by the time we sign in to camp your leg will be fine.

When he said goodbye to Alfie, Alfie asked how his leg was, and Jammy replied that it still hurt, but mama had given him medicine. Alfie looked at me with raised eyebrows and asked, What medicine? I told him (with Jammy listening),

I gave him a placebo pill, you know the one I keep in the cabinet for stuff like this? It's got a nice minty taste so Jammy didn't have any problem chewing it.

On the drive to camp, Jammy said his leg was feeling better, but he was still a bit worried. As we arrived and lined up to register, we saw a grownup wearing a chicken hat. I could see the gears in his mind cranking, thinking, reevaluating. When he saw his and his brother's nametags on the table, he perked up, and when he saw his friend's nametag on the same table he began to grin.

By the time the camp counselor gathered them together for an aerial tour of the campgrounds, Jammy had forgotten all about the pain in his leg. 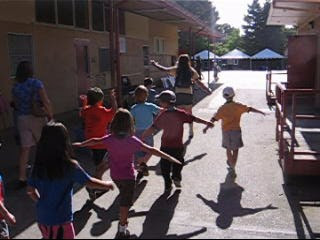 Looks like those placebo pills did work after all.
posted on Monday, June 14, 2010 Labels: Jammy
Email ThisBlogThis!Share to TwitterShare to FacebookShare to Pinterest

Placebo pill huh? I would've given a 1/2 dose of ibuprofen just in case his leg really did ache and sent him on his way. Hmmm...so what exactly is a placebo pill that is minty? Enquiring minds want to know.