The Winter Olympics: Who's on Top?

The 2010 Winter Olympics are over, and now that my family is no longer obsessing about whether Canada wins another gold medal or whether Apolo Ohno makes it through another race without getting shoved or disqualified, it seemed like a good act of closure to visit the Winter Olympics site to check out the medal standings. I've been quite impressed with the Canadians' amazing performance at these games (they won more gold medals at these winter Olympics than any other nation has ever won in a winter Olympics), so I have to say I was surprised to see the US at the top of the table: 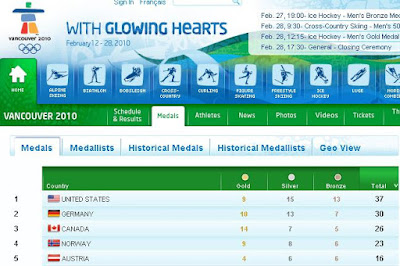 I've always thought these medal tables ought to go by the number of gold medals, not the number of medals overall. After all, you're ranking the countries by the number of winners, right? Besides, the US is always on top of the table. As a world citizen who's used to America running around thumping their chest and declaring, "We're Number One", it would be nice to see another country there for a change, and I'm all for giving props to the underdogs.

But then I suppose each country who medaled in these Olympics is going to want to present the results to make themselves appear in the best possible light. To test this theory, I went on a virtual round-the-world trip to the websites of leading newspapers in countries that medaled in these Olympic games. I managed (and believe me, it's not easy to figure out how to surf a Russian or Korean or Chinese website when you have absolutely no idea how to read their language) to get some screen shots of the medal counts (I've shown only the top five countries for brevity's sake), and the results speak for themselves: 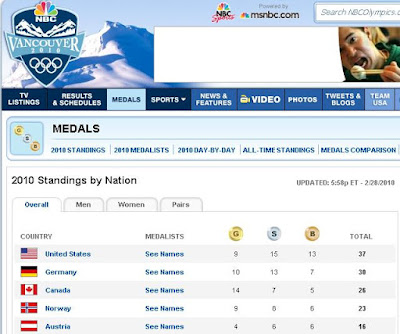 NBC Olympics page, US
Most Americans who care about the Olympics would go to the NBC Olympics page, so I'm not surprised that they chose the method that puts the US on top (had they ordered the countries by the number of gold medals, the US would be #3). That's pretty much the case in all the American newspapers: 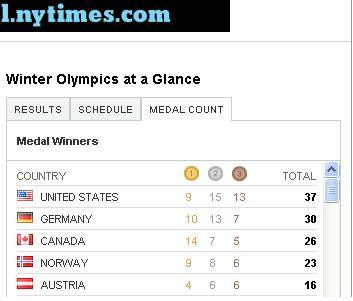 South Korea, on the other hand, chose to order the countries by number of gold medals. They're ranked #5 in terms of gold medals, and #7 in terms of overall medals. Again, not surprising. If I were Korean, I'd want to see my country in the top 5 too. 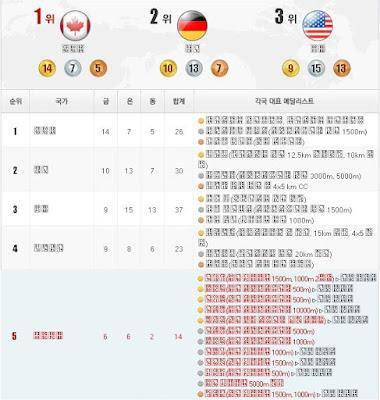 But how does the rest of the world do it? I decided to go to the BBC, since their newscasts always seem to have such an unbiased, authoritative vibe, what with their posh British accents and all (besides, I'm married to an Englishman and he'd be quite offended if I suggested that the BBC was anything less than 100% neutral). They use the Gold Standard too: 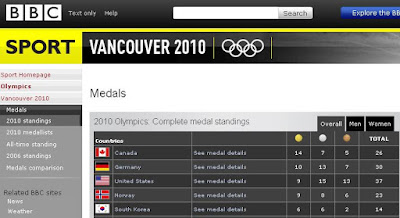 But hang on, I thought. Canada used to be part of The Empire, and even now, for some reason, they call Elizabeth II their queen, so it's possible the Brits might be leaning towards putting their former colony on top of the medal heap. So I looked for a country that would have no reason to care which way the medals are tallied. Germany ends up second in the total medal count and gold medal count, so I figured they're as neutral as any country. Also -- since I'm flaming the fans of nationalism here -- Germany was beaten by both the US and Great Britain in World War II, so I figure they'd hate both countries equally. If you think it's silly to be bringing that kind of ancient history into sports, just ask Alfie about how his father and grandfather felt when England beat Germany to win the World Cup in 1966). 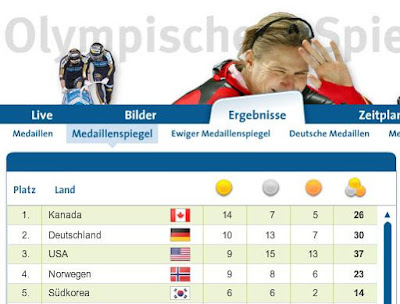 Germany's newspapers use the gold medal tally. Another "neutral" country, Norway (who stands at #4 in both gold medal tally and overall medal tally) also used the number of gold medals to report medal counts in their newspapers -- although I noticed that the Norwegians couldn't resist reminding their countrymen that they are Number One in gold medal and medal standings for the All-Time Winter Olympic medal count.

For a true lack of bias, check out this Austrian newspaper. They stuck to the gold medal tally even though it meant Austria would be ranked #9 instead of #5: 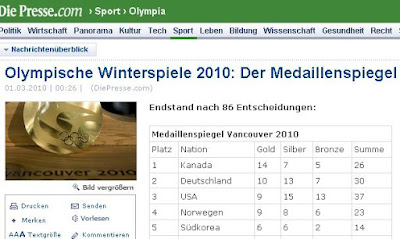 
And what of the Canadians? Surprise, surprise, they used the overall medal tally and ranked themselves third! 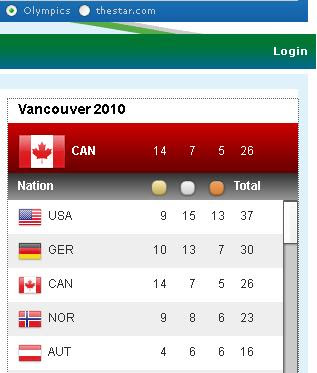 I actually checked a couple of Canadian sites to make sure this one wasn't a fluke (as if the most popular news site in Canada would be a "fluke"), and they all ranked the countries by overall medals. Good for the Canadians. I guess when you do something completely awesome, you don't need to brag about it, you just let your achievement speak for itself. They make me feel silly about caring who's on top. Alright, US and South Korea, you can keep your medal standings. Countries have enough to fight over without adding medal count methods to it. Besides, either way is perfectly valid. At least no one's tallying fictitious platinum medals! 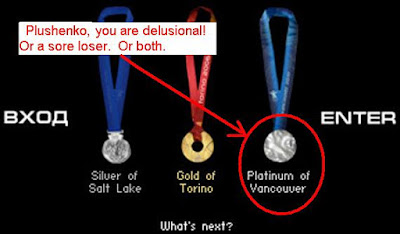