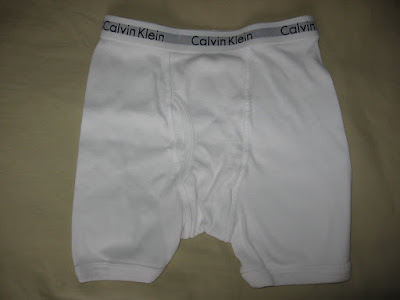 What is it with men's briefs? Here's a photo of a pair of Calvin Klein boxer briefs for little boys (I bought a pack for 3Po and Jammy the other day). They're quite adorable, and when my boys wear them they look like little buff Mark Wahlbergs. But when I take away the cute kid, all I'm left with is a pair of underpants with a slit down the side. I have never understood that slit. I know what it's supposed to be for, but I just can't see any male actually using it in this day and age. I have so many questions:

If a little boy is dancing in his pants, dying to pee (and since little boys always wait until the last minute, this always applies), does he honestly have time to maneuver his Wee Willy Winkie through that slit and pee out of it? Wouldn't he just yank his trousers and underpants down in one desperate motion before his bladder bursts? And wouldn't the same apply to grownup men?

Even if a man did have enough time, wouldn't it still be really awkward? Now, I'm a former Catholic schoolgirl so I don't know much about the male anatomy (cue eye roll by Alfie), but it seems to me that if you're wearing tighty-whities, there's going to be a lot of organ-bending involved, which doesn't sound like something a man would want to do.

Why is the slit cut down to one side? Is it always cut down the same side? Why not down the center? Does it have anything to do with being right-handed (and if so, is this a possible case for discrimination against left-handed people)? Or do most men's winkies lean to one side?

How do Calvin Klein and the other underwear makers decide how big the slit ought to be? Did they take measurements? Is there such a thing as a male organ fit model? Does that slit get proportionally larger with larger sizes of underwear?

Unfortunately I can't do any field research in the matter, since, well, Catholic schoolgirls don't enter male restrooms, and they don't ask men such questions, and Alfie is a sample size of one, and he refuses to break the male code and peer over his shoulder to see how other men pee. So I have to apply the process of elimination (no pun intended) to come up with the only remaining reason why the slit is still there.

C'mon, Calvin Klein and all you men's underwear makers. Admit it. The only reason you put the slit is to make sure that male underwear doesn't look like female panties.
posted on Wednesday, March 10, 2010 Labels: boys will be boys
Email ThisBlogThis!Share to TwitterShare to FacebookShare to Pinterest

I'm glad I'm not the only person who wonders stuff like that. I know my Hubby & 5 yr old son (the only 2 males I've seen nekkid) don't use the slit thingy. They just pull down their undies.

Indeed that is the question ! I always bought boxers without slit, anyway he would never have used it and today he buys also without slit, Mr. G. too. It's so unhygienic and not practical at all. Probably Calvin Klein pees sitting !

This was an extra good post... I had a great laugh! Being your co-Catholic schoolgirl, I actually never ever wondered about the details. I'm just glad my boys wear them!

you are such a funny gal! i never actually wondered about the things you wrote here until i read them here. now it makes me think... :-D

My facebook friends have enlightened me to two historical reasons for The Slit:

1) When men used to wear long johns, The Slit was actually a great way to pee without having to strip down to practically nothing;

2) In cold climates, you can use The Slit so you don't have to expose your ass!

However, in our modern era of heated restrooms and jeans that hang down so low that they're halfway off your butt anyway, I can't see how they apply!

oh this was cute... made me chuckle :) I will be thinking about your post when I am pulling those boy knickers from the dryer for weeks....

whoah this weblog is fantastic i really like reading your posts.
Stay up the great work! You realize, lots of
individuals are hunting around for this information, you can aid them greatly.