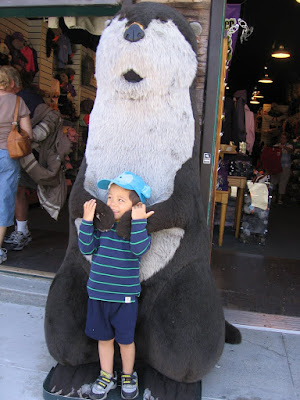 We had a great time at the Monterey Bay Aquarium today, and the fun started even before we stepped inside. An otter-themed souvenir store on Cannery Row featured this gigantic fake otter that the kids fell in love with. All three insisted on having solos taken with him.

Speaking of fakes and otters, inside the store we found these Harry Potter knockoffs that I thought were absolutely hilarious! I just had to share it, but didn't think to take a photo at the time, so I searched the internet and found this (public) photo on Flickr -- thanks to chrisada for the photo! What an OTTERly great pic.

looks like you had a blast!! What great photos and great for this weeks theme.

have a great weekend, :D

Oh, great otter shots! Looks like it was loads of fun.

Both of those are very cute! Especially the photo with the giant fake otter. Your little one looks so happy!

That's so sweet. I could find room in my house for Hairy Otter for sure.

How clever. Boy, I had a tough time coming up with something fake. Y'all seem to make it look so easy for the theme.

Is the fake one the taller of the two!!!!

Mine is up too.

That is a HUGE otter! And the Harry Otter is so funny.

Those a re great photos! I love the giant otter!

I love the Hairy Otter! That is too funny.

And I am so impressed that your kids love the big otter. My scaredy-cat of a son wouldn't have gotten near it. Those are "too scary" for him still.

Somewhere I have a picture of my daughter with a huge Shamu from SeaWorld. Certainly better than snuggling with the real thing.

Great picture for "fake." Your son is so cute.

Thanks for stopping by and have a great weekend.

Love that photo of your son with the giant otter. Harry Otter, haha! So cute!

oh that's a lovely photo indeed! looks like he enjoyed it. happy weekend! :)

How funny is that... Harry Otter! I bet that with some accent Harry Potter comes out Harry Otter.

CUTE! Just in time for the much awaited release of the HP book and movie :)

That is certainly the biggest otter I have ever seen. Fun picture!

Fun! I love those big characters. Great shots for the theme.

My two sons hate having their picture taken with giant characters. I love the Harry Potter series and that Hairy Otter is too funny!!! Thanks for visiting.

How cute... I love how the otter mamas carry their babies on their tummies in the water. Great pictures!

looks like you had a grand time! that's a nice otter thingy :D