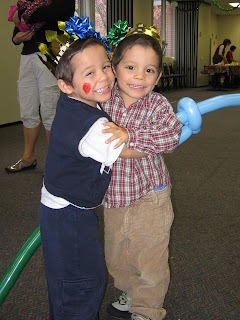 I took the kids to the Palo Alto Family Y's holiday party. A clown was twisting balloons, so of course we lined up. When the boys' turn came, the clown asks them what they want. Answer: "swords!". Which I was not thrilled with, but half the boys in the room had balloon swords, so I let them have the swords, blue for James and green for Philip (as usual). They had the time of their lives playing with their swords, until James' balloon popped. Then they had the tragedy of their lives.

We have never had any war toys in the house, but James constantly picks up sticks and twigs, and waves them around making whooshing, explosive noises. Is this hardwired into boys? Maybe. I remember attending a PAMP talk about raising boys, and the speaker said that this behavior is frequently observed -- boys will make a weapon out of anything even before they know what a weapon is. They have an innate need to assert themselves and gain some control over things, perhaps because as children they often feel so helpless and powerless. Pointing the stick and making the whoooshing sound is a way for James to assert his power. Come to think of it, recently both boys have been obsessed with "the power" that their Lolo (grandfather) and daddy have over them; power to reward them for good behavior and reprimand them for bad behavior. Notice that mama is not mentioned, only Lolo and daddy have "The Power". Hmmmm....