Phew! What a day.... rushing to get balloons, fix the pinata, decorate the party room..... and all with Philip and James being the whiniest they've been all year (must be all the excitement of turning 3) -- but it was all worth it. None of my fears were realized. What a GREAT day it was for all the little girls and boys. 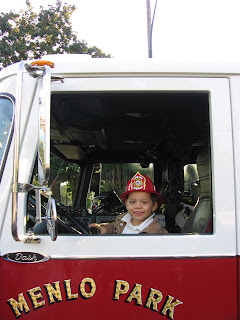 At 3PM we started the party at Menlo Park's Fire Station #6. Firefighter Phil was there to greet us and hand each kid a red firefighter's hat. I had brought some library books on firefighting to read, but didn't get around to it because we started almost right away. First everyone sat on mats and talked about fire safety, dialing 911 and the stop-drop-roll maneuver. It was great to see all the kids participating in the discussion.

Then we split into two groups. One group got to ride around the block in a shiny, old-fashioned fire engine while the second group got to squirt water from the firefighter's hose. Then the groups changed activities. Finally, everyone got a chance to climb into the firefighters modern fire engine and check out all the equipment.

All the kids were so excited! Even the grownups seemed to have a great time. This was way more than I had expected -- I thought they would just tour us around the fire station and get to climb into the engine. We ended a little early because the firefighters were called away to some emergency, but they were all so kind, didn't rush us out or anything (of course we hustled anyway).

After the tour, it was just a short walk around the corner to Round Table Pizza, where mommy, Risa and I had decorated their party room earlier, with balloons, paper chains and hanging firefighter cutouts. The kids watched a firefighter video and had popcorn and cookies while waiting for the pizza to come. After pizza, we blew out the birthday cake (after many failed attempts at cupcakes in ice cream cones, I chickened out and bought a cake from Safeway) and had cake with ice cream. After that, it was time for the firetruck pinata (made from scratch by Risa and me!) and Pin-the-Fire-Helmet-on-The-Clown. The kids loved both games. Goody bags consisted of some fruit snacks, a dalmatian sticker, some wafers, and a fire safety coloring book. Everyone said it was a great party.

I'm happy -- my boys had the time of their lives! Gosh, now how to top that for their 4th.....
posted on Saturday, December 30, 2006 Labels: kids, twins
Email ThisBlogThis!Share to TwitterShare to FacebookShare to Pinterest

Any advise on making a firetruck pinata?