As parents, we always watch over our kids and try to keep them safe -- with stair gates, baby-proofed outlets, rules. Some parents (Graham) are more vigilant than others (me), but it is so easy for both of us to be lulled into a sense of security, that the kids have enough of a "safety radar" to be trusted. Then every once in a while something happens that causes us to remember that they are so young and accidents do happen. The last time it happened, the unfortunate victim was Jamie. This time it was Philip.

It was 7PM on Wednesday, and our babysitter had just arrived. She was laden with Christmas and birthday presents, and everyone was excited. Graham had just left for his poker night and I was looking forward to a nighttime holiday stroll at the Stanford Shopping Center. Phyllis went to park her car and I went into the bathroom to help Natalie undress for her bath, leaving the door open. Big mistake. A second later, I heard the door slamming and Philip started to cry. Really, really hard. That unmistakable cry that tells parents that something is really, really wrong.

When I got there, James was near the coffee table and Philip was standing in front of the closed front door with his finger caught just below a hinge. James had slammed the door and Philip's finger happened to be in the gap. He was screaming and trying to pull his pinkie out. Good God!!!!! I rushed to open the door and free it.

Do you know those cartoons where an anvil falls on Wile.E.Coyote or Bugs Bunny or Tom or Jerry and they end up flat as a pancake? That's what the tip of Philip's finger looked like. The middle part was nice and fat, then it abruptly flattened out like a thin piece of paper. Looking at that side of the door, there is no space between the door and the frame. Philip was wiggling his finger and shaking his hand, but I knew there was no way it could not be broken. Phyllis and I dunked his finger into a cup of ice and I called Graham. I left James and Natalie with Phyllis and I bundled Philip (who was now shaking uncontrollably) into the van, picked Graham up and headed straight for the emergency room.

I don't know why they call it an emergency room anyway. The word connotes a sense of urgency, like the scenes in ER or Grey's Anatomy where hurt people get rushed in and treated. We thought that a hurt little boy with a broken bone might be given a higher priority. But the night turned into an endless wait-and-be-seen-then-wait-again, for a total of four and a half hours. Fortunately Philip had stopped shaking and calmed down. He seemed dazed, in shock. But he was a trooper. When they x-rayed his hand and confirmed the break, when they washed off his bloody finger, when they bandaged up the cut (should have had stitches but the nurse managed to seal it with steristrips to spare Philip the injection and stitching), when they splinted the finger, I could tell he was terrified and wanted to be left alone, but he didn't cry and didn't move (he was very proud of that). 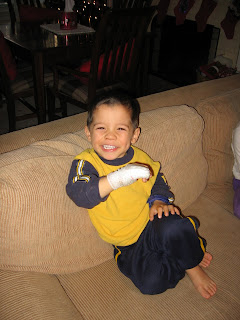 Two days later, the kids are still very careful around doors (let's hope that lasts!). They are all being very careful with Philip's injured hand and Philip is learning to work around it. James and Natalie are a bit awed by Philip's bravery. It wasn't Jamie's fault (well, it's just as much Philip's "fault" for putting his finger there as it is Jamie's "fault" for slamming the door) but I can tell that he feels a bit guilty about it. It was an accident, but accidents can be avoided, and that's where parents come in. So I feel guilty too -- if only I hadn't left them, hadn't left the door open. But we're thankful that nothing worse happened. It was the first time we had taken a child to the emergency room, and hopefully (but not likely) the last.
posted on Friday, December 22, 2006 Labels: kids, parenting, twins
Email ThisBlogThis!Share to TwitterShare to FacebookShare to Pinterest