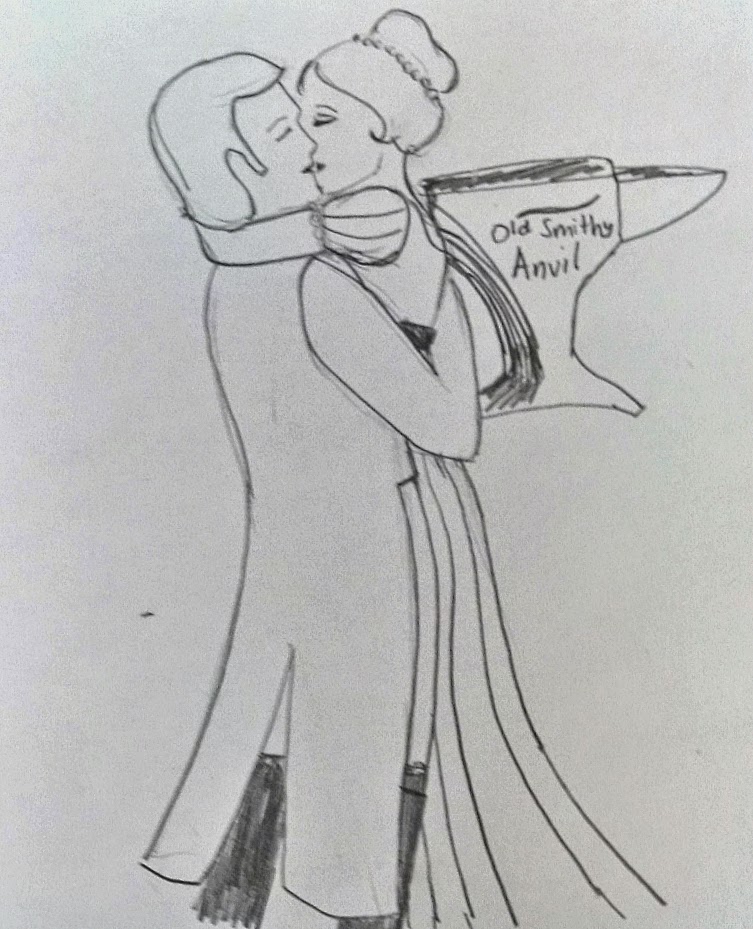 Gretna Green came up a lot in historical romances because of its popularity as a destination for runaway weddings.  The Marriage Act of 1753 made marriage laws more restrictive in England and Wales than in Scotland, so young couples would run away to Scotland to get married.  Gretna Green was the nearest Scottish village to the English-Scottish border.  In period romance novels, more often than not the historical (not hysterical!) heroines and their One True Love ended up rushing to Gretna Green to prevent a silly younger sister from marrying a dashing (but poor and immature) army officer, or to elope themselves (think of Jane Austen's Pride and Prejudice, or Love and Friendship). 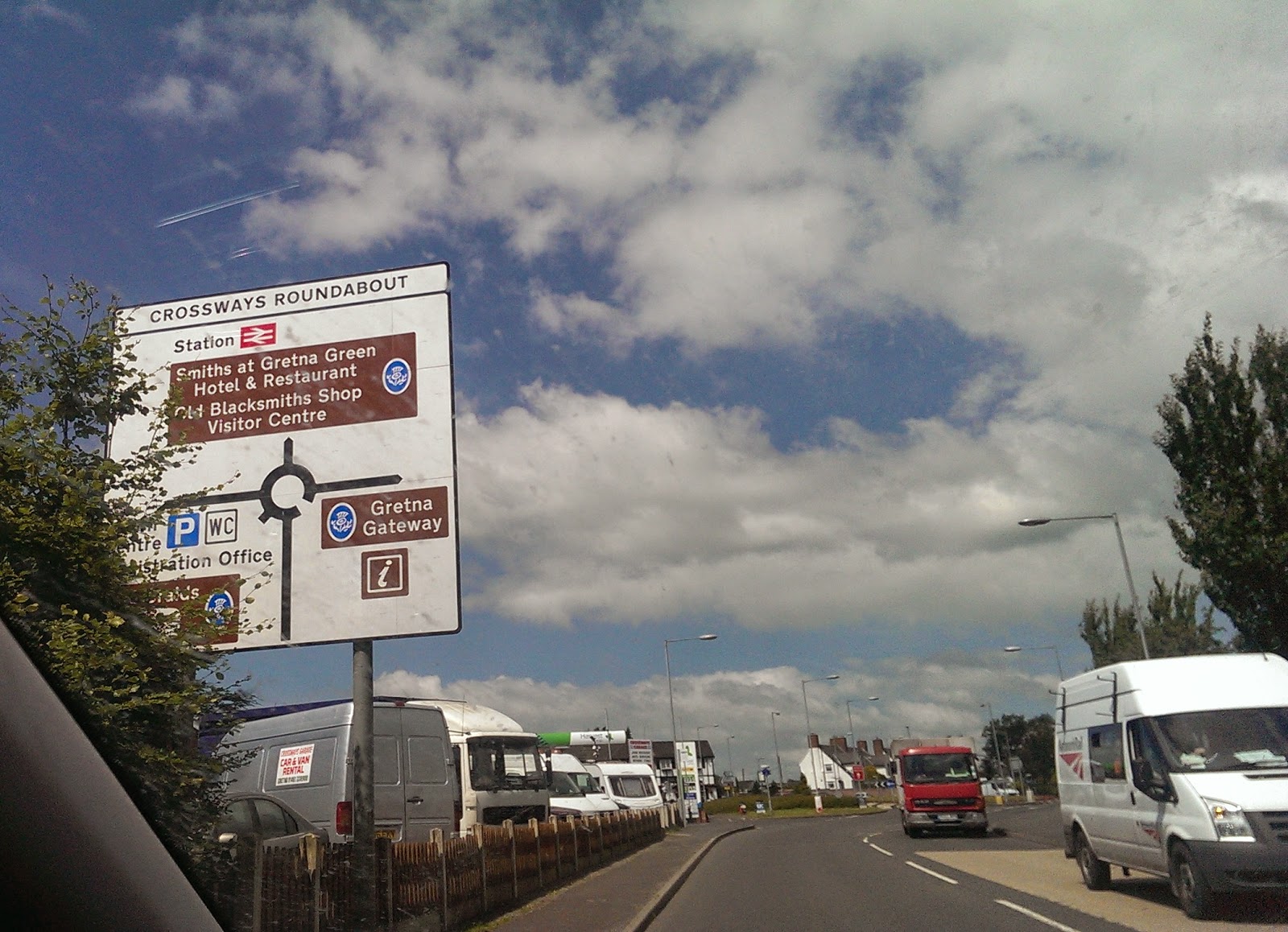 When we started planning our road trip to Scotland, I knew Gretna Green had to be one of our stops.  If you plan to drive from London to Edinburgh or Scotland, it's actually a great place to break up the 6-hour journey.  Gretna Green is just off the A74 motorway, and its most famous building, the Famous Blacksmith's Shop, has a nice collection of cafes and shops.  It definitely beats pulling over at one of the Moto Rest Stops and grabbing a burger! 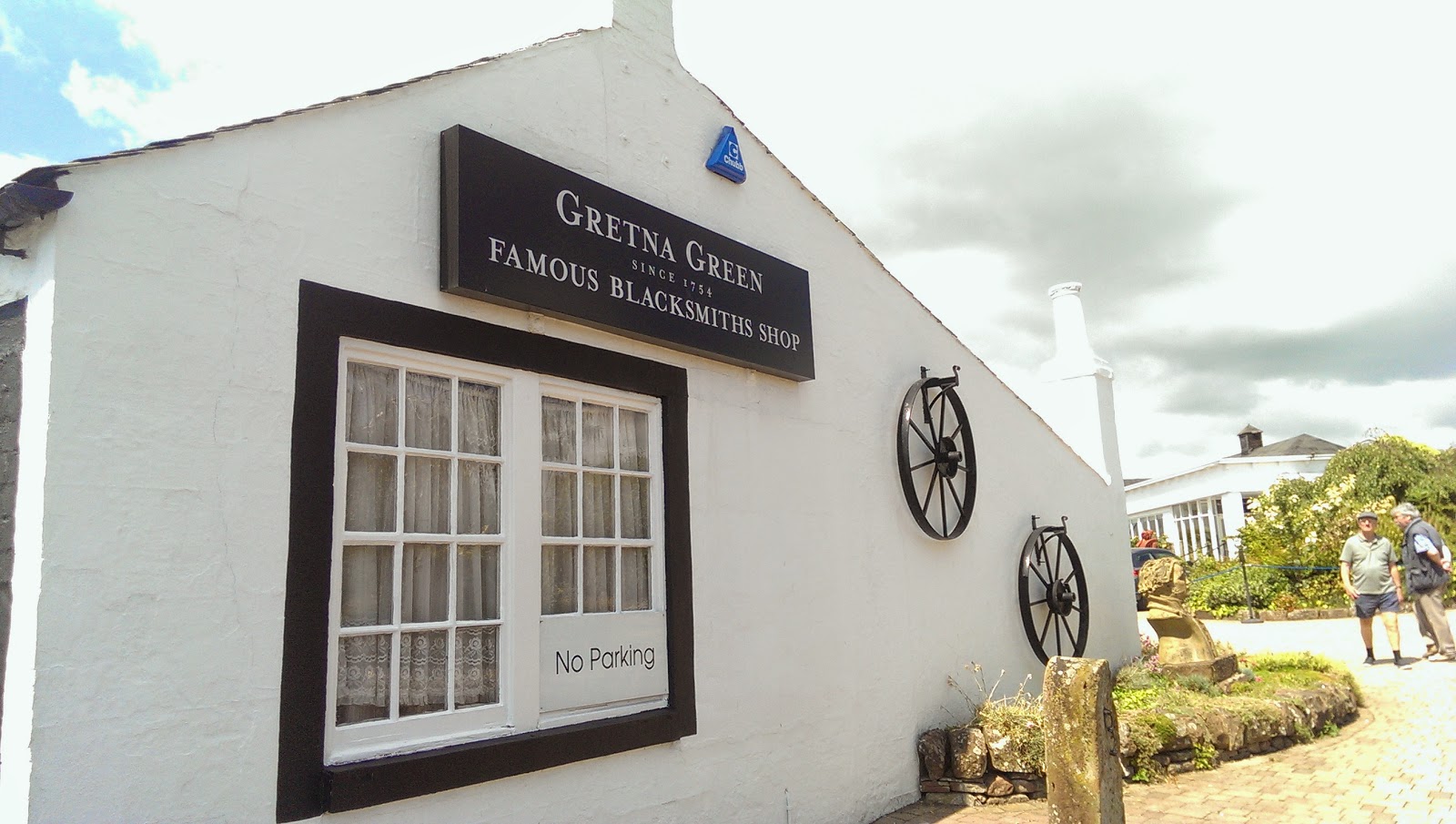 The blacksmith's shop and the anvil are synonymous with Gretna Green weddings because Scottish law allowed anyone to conduct a marriage ceremony as long as the couple had 2 witnesses. The task fell to the blacksmiths at Gretna, and couples have been marrying there ever since.  Even today, Gretna Green is one of the most popular marriage destinations in the world! 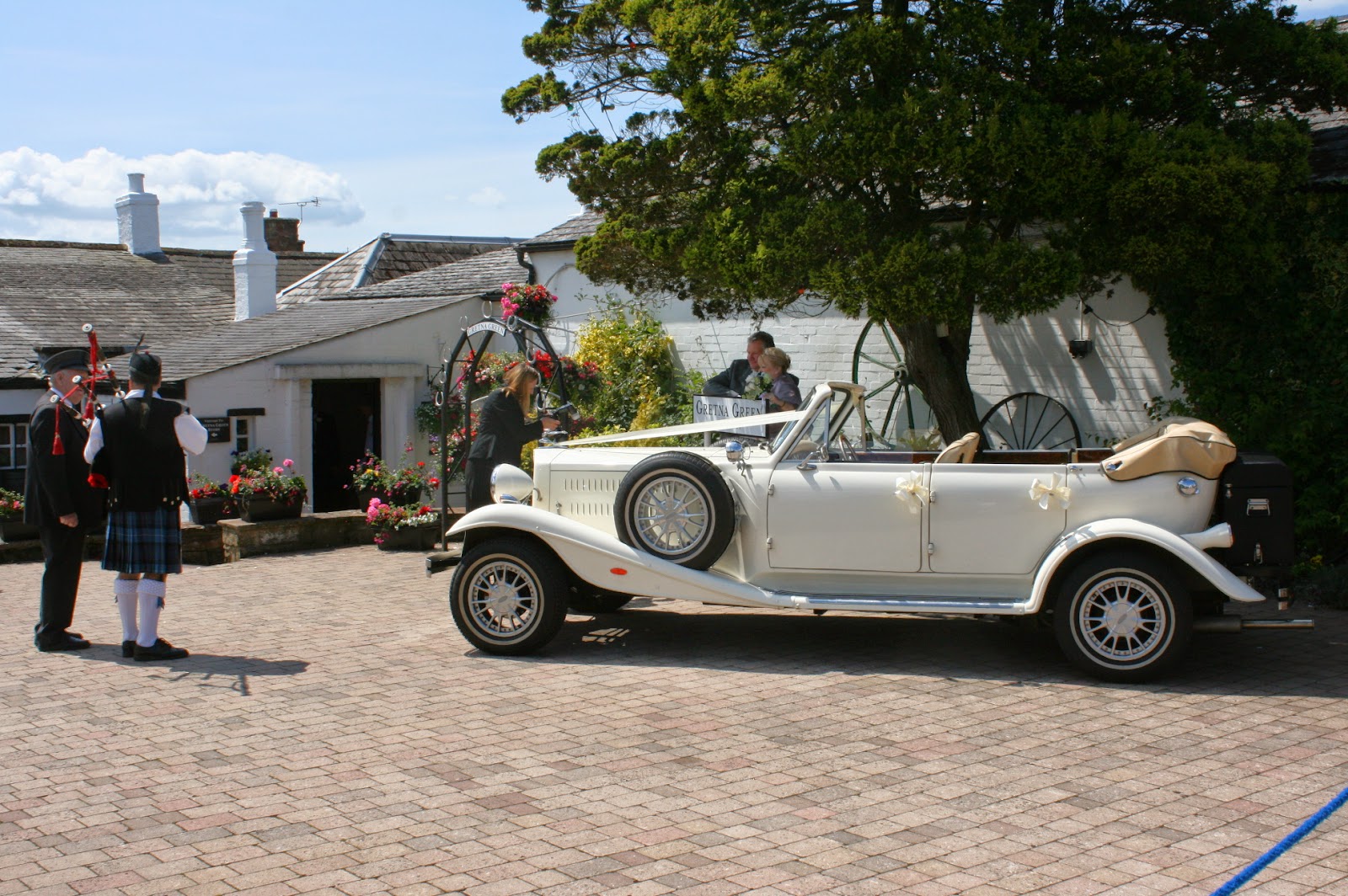 The Famous Blacksmith's Shop complex is extremely visitor-friendly.  There's loads of free parking, and there's an outdoor playground so little kids can get their wiggles out after sitting in the car for so long.  There's also a courtship maze, which is like a hay bale maze, with costs £2 per person, but we skipped it because we didn't want to stay too long.  The courtyard is a nice place to sit and bask in the sun (if the sun bothers to show up, that is -- we were lucky to get a sunny day, but more often than not this place is probably cloudy and cold!). The courtyard has two huge sculptures, one of a couple embracing (see the very last photo on this post), and one of a pair of holding hands.  Check out the bagpipe player!  He played for about 5 minutes, and judging from the nearby tip bucket, it's a regular thing. 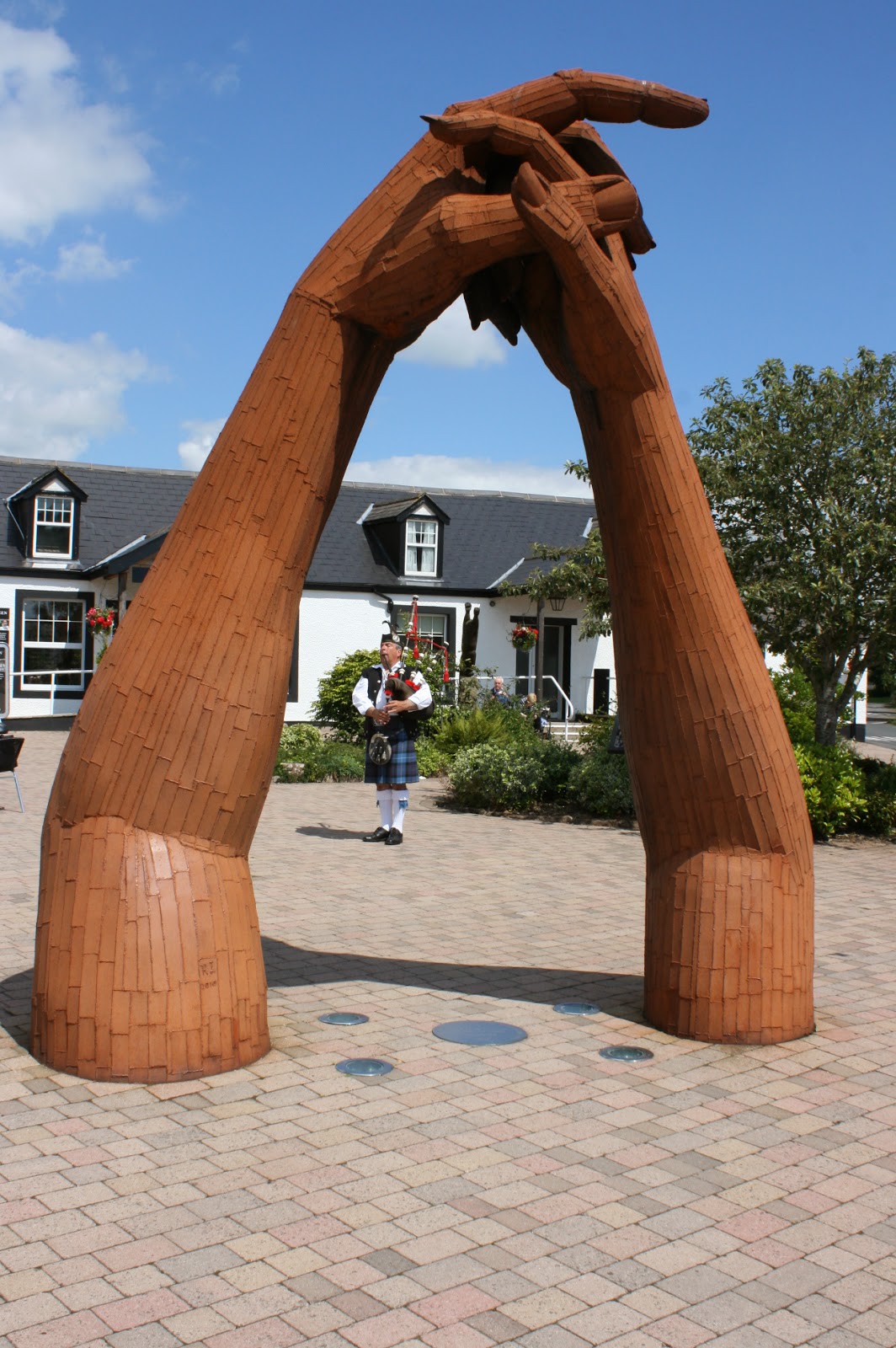 The bagpipe player also played at a few of the weddings that took place while we were there.  That's right, no less than 3 couples got married while we were there!  We didn't see the actual marriage ceremony, which took place in the Marriage Hall, but all the couples posed for photos outdoors under a beautiful wedding arch. 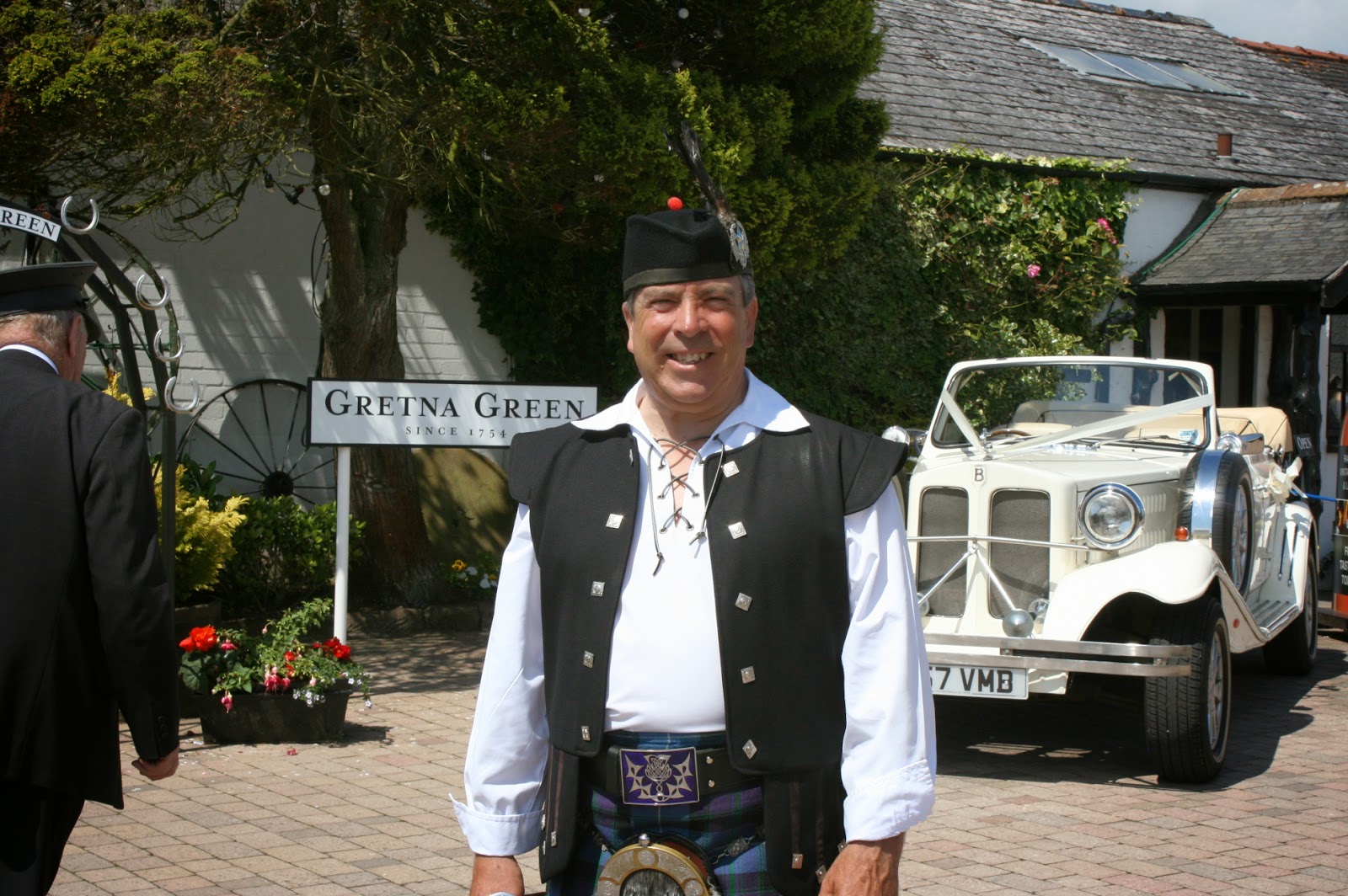 Due to the weddings, the Marriage Hall was closed and we weren't able to see the Marriage Anvil, so we decided to skip the Gretna Green Story Exhibition (£3.50, with discounts for kids and seniors).  We spent our time having lunch in the cafe and browsing through the souvenir stores. 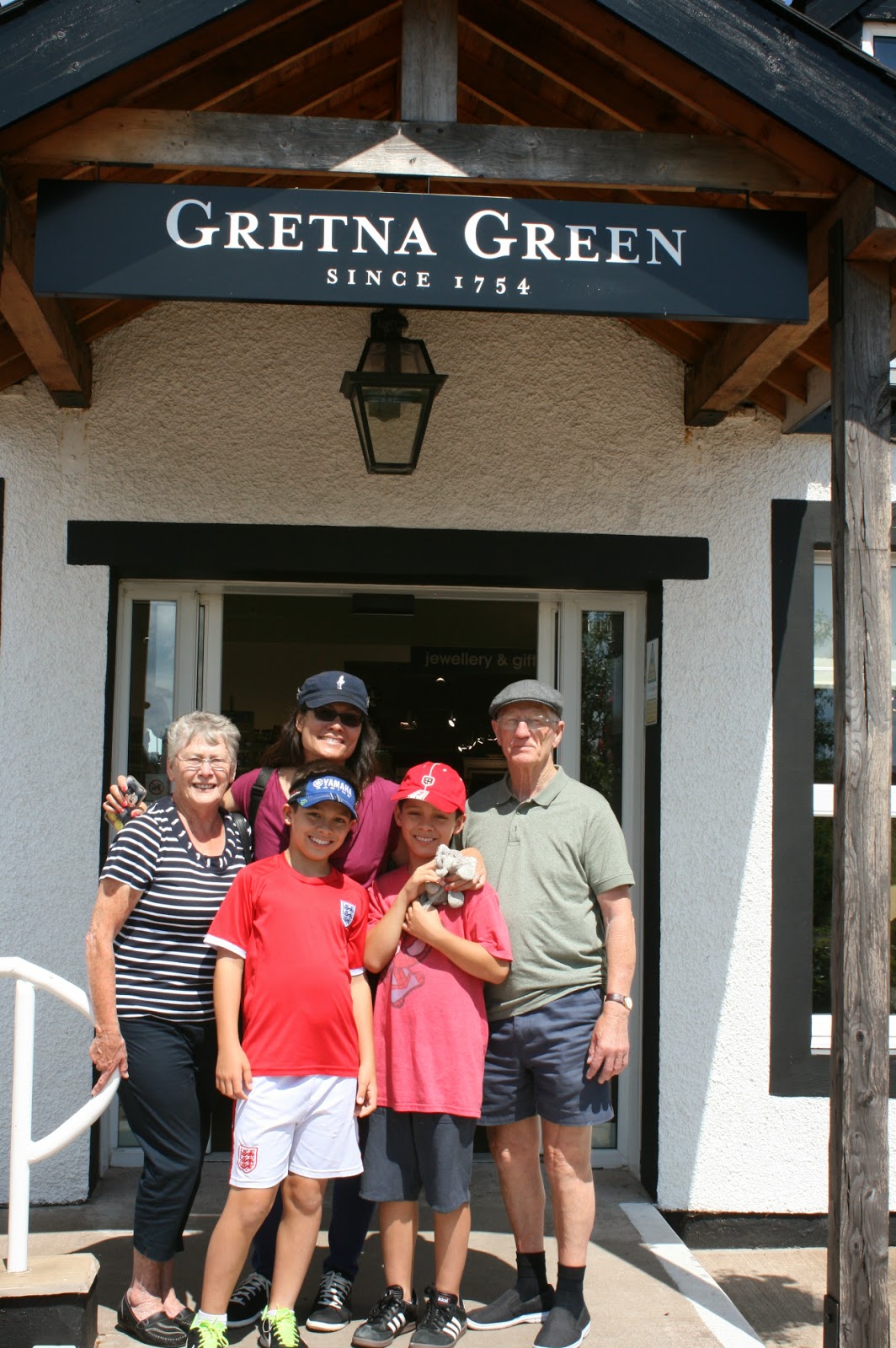 In retrospect, if I could do it all again, I would have planned our Gretna Green stop more carefully and booked a marriage vow renewal ceremony (packages start at £160).  It would have been a sweet thing to do.  It would have been even sweeter for Alfie's parents, who celebrated their 60th wedding anniversary this year. 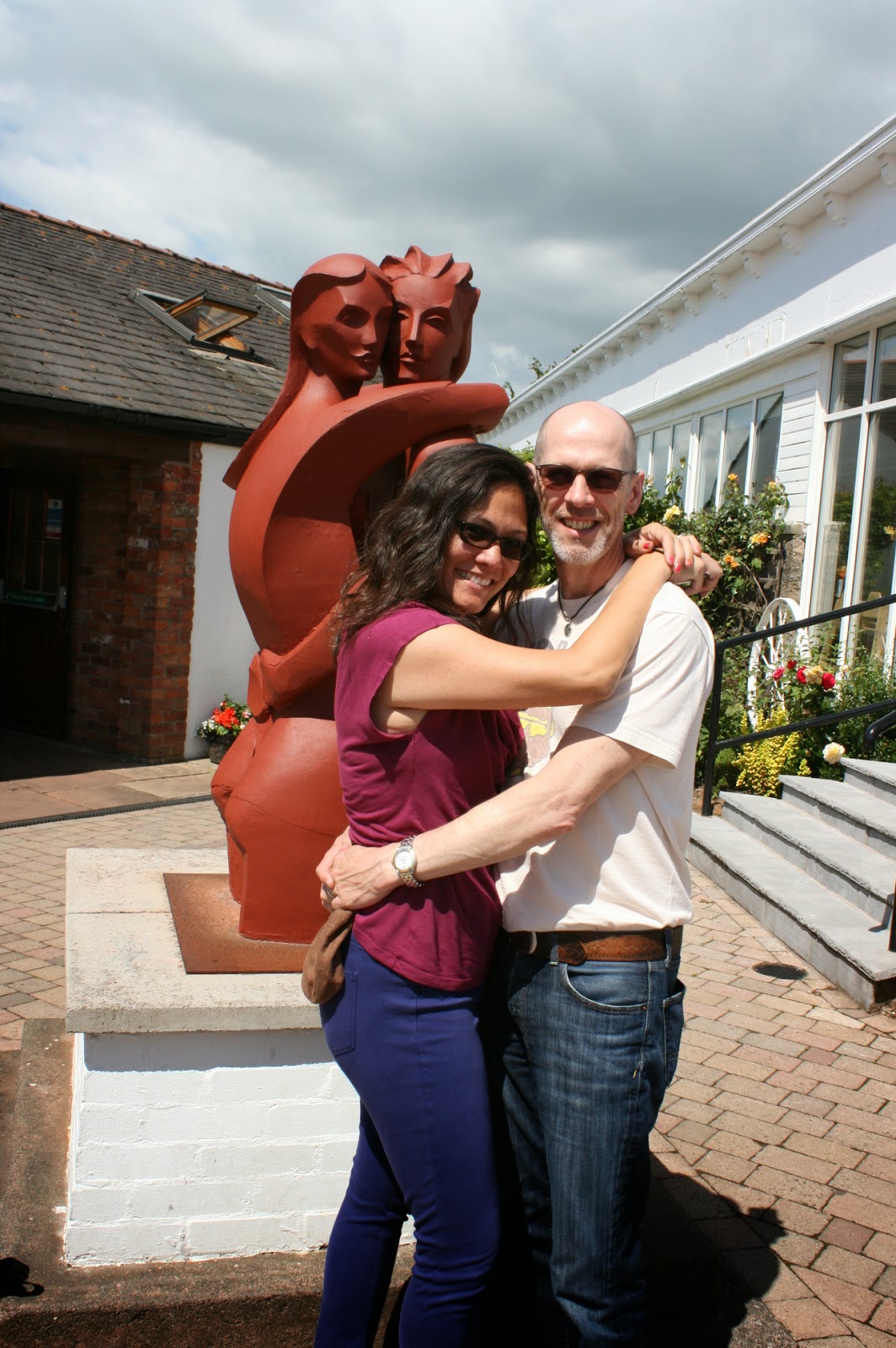 Oh, well.  Alfie and I both agreed that someday we want to go back to Scotland and explore the Highlands. Maybe we'll pass by Gretna Green along the way.  I've already got my dashing Englishman, so the only thing I need to do to complete my storybook romance is to get hitched at Gretna Green!

posted on Thursday, July 31, 2014 Labels: about me, childhood memories, travel
Email ThisBlogThis!Share to TwitterShare to FacebookShare to Pinterest