Changing of the Guard: Is it worth braving the crowds? 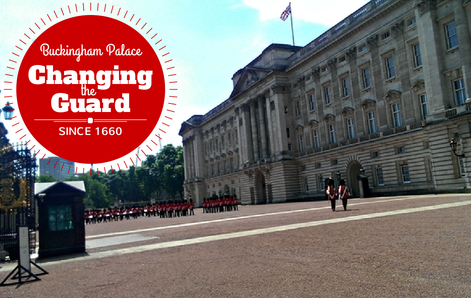 The Changing of the Guard (actually it's called "Changing the Guard") is the formal ceremony that accompanies shift changes for the regiment guarding Buckingham Palace and St. James Palace. It takes place on select days at 11:30 (make sure you check the schedule online before you go).  Changing-Guard.com does a great job describing the whole event in detail, but to summarize:


To get to Buckingham Palace, we took the Tube to the Green Park station; from there, it was less than 10 minutes' walk through Green Park.  I definitely recommend getting to Buckingham Palace at least 30 minutes before the start of the ceremony (check the Buckingham Palace website for start times) -- you need to get there early to get a decent viewing spot, and the whole thing lasts only 30 minutes!  I wanted to be there by 11:00, but of course we got delayed, and we arrived just after 11:30.  By that time, the crowd in front of Buckingham Palace was about 7-8 people deep.

At that point, there was no hope of getting anywhere near the gates, so Alfie hoisted 3Po onto his shoulders and I hoisted Jammy onto mine.  I hated doing this even when they were toddlers, so you can imagine how miserable I was doing it with a 10 year-old!  I squirmed around so much, the only photos Jammy was able to take were blurred ones like this one:

Fortunately, if you stick around long enough, people at the front grow tired of listening to band music while getting jostled from behind, so they leave their spots.  Eventually we were able to make our way to the front (which was a good thing, because I was able to get Jammy down from my aching shoulders) and get a much better view:

At times during the ceremony, pairs of guards would march right up to the gates, so we were able to get some good close-up shots.

If crowds make you claustrophobic and you don't want to fight your way to the front, don't worry.  After the musical fanfare, a portion of the New Guard remains at Buckingham Palace while the rest of the New Guard marches out of the Palace Gates, around the Victoria Monument (half of them go round the right side, and the other half go round the left, so people on each side get a view), and down the Mall to St. James' Palace.  So if you station yourself anywhere along that route, you'll get a good view.

Was it worth the effort of getting there and pushing through the crowds?  If you ask Alfie and the kids, the answer would be an emphatic No. We were too far away to see the actual ceremony (expect for the occasional pair of guards who would march our way), which consisted of a lot of marching around and a band playing show tunes.

In retrospect, I think I should have taken the kids to this when they were several years younger, when they were young enough to be excited by the spectacle -- or waited another decade, when they were mature enough to appreciate the cultural significance (although some supposedly mature people -- *cough*Alfie*cough* -- will never appreciate it).  Yes, it's crowded and touristy, but yes, I had to do it, and yes, I did enjoy it, if only for the fact that I get to cross it off my Must-Do tourist attractions list!