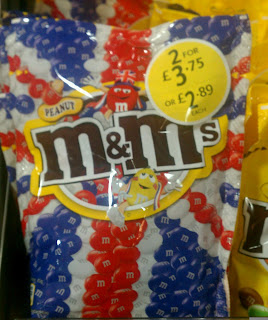 Olympic fever has definitely hit England.  Many English households have their homes decked out with British flags -- they were originally put up for the Queen's Jubilee, and the owners have let them stay up for the Olympics.  The papers and tabloids all have an Olympics section with a daily countdown and daily feature of a British athlete.  Stores are filled with Team GB logowear (Olympic logowear is rare; I'm assuming only the official London 2012 stores will have them) and you can buy Olympic-themed everything and anything you want.  Here's a sample of some of the Olympic-themed candy we've been munching on: 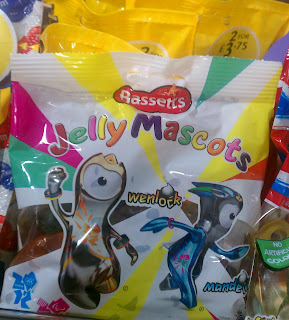 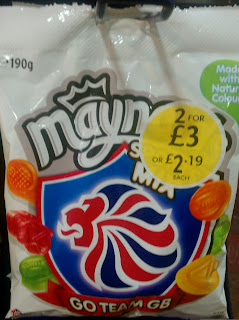 Maynard's Sports Mix is the perfect candy to give an Olympic or Team GB theme, since these are firm, fruit-flavored gummy candies in the shape of sports equipment like tennis rackets, sailboats and soccer balls.  Never mind that half the sports equipment -- cricket bats and stumps and rugby balls -- aren't Olympic sports!  Maynard's is owned by Cadbury's, which is a London 2012 and Team GB sponsor (the official term is "Supporter"), so you can bet they're going to take every opportunity to put the Olympic or Team GB logo on their products! 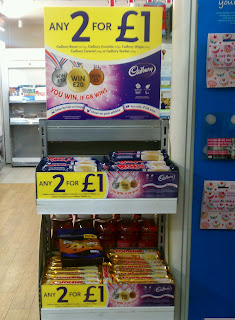 Speaking of Cadbury's, they have lots of Olympics promos going on like sweepstakes, Team GB support campaigns, and a limited-time product:  giant Cadbury's chocolate disks covered in foil to look like Olympic medals.