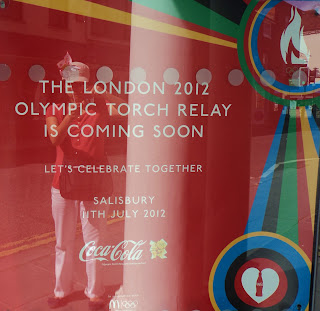 Today, The Pea and I attended our first Olympic event: we saw the London 2012 Olympic Torch pass through Salisbury!  The torch has been making its way around the UK since mid-May, with 8,000 torchbearers carrying the flame through more than 1,000 cities, towns and villages.   June 11 was Day 54 of the Olympic Torch Relay, and I was determined to see it. 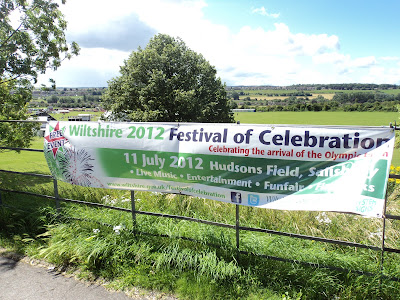 I chose Salisbury because they planned a whole day of celebration and festivities to welcome the Torch, so instead of 30 minutes of enjoyment (actually, it would be 25 minutes of sitting on the sidewalk, waiting for the Torch, and 5 minutes of enjoyment seeing the Torch pass by), we'd get hours of fun.   It was also a chance to spend some time with my cousin, who drove down from Watford and picked us (The Pea and I) up along the way. 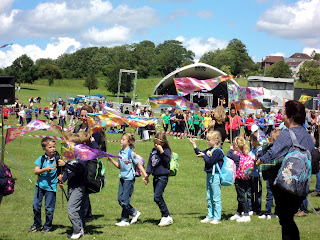 The festival was held at Hudson Field in Salisbury, and we arrived just as it opened, at around 1:00PM.  It wasn't crowded at all, and we took advantage of the breathing space to walk around and check everything out.  We saw local schoolchildren doing sports demonstrations at the center of the field and choirs singing on stage. 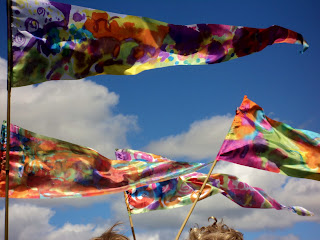 Other groups of children were parading around the field waving colorful flags.  They looked gorgeous against the sunny sky (clear and blue, for once!). 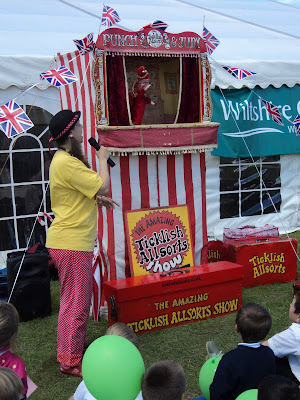 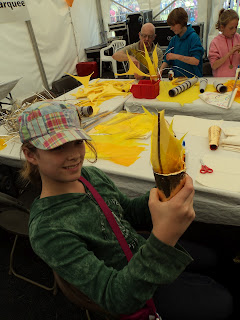 There was a kids area with face painting and crafts; The Pea got to make her own Olympic torch and Olympic banner. 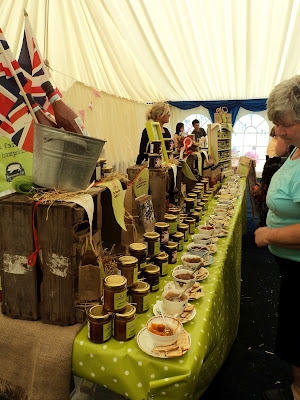 There was a tent where locals displayed and sold anything and everything from chutney to cheese to chorizo to cupcakes to candles to cable-knit sweaters.  All the homemade goods looked so pretty, and the food tasted marvelous.  There was even a tombola (raffle) booth to raise money for charity. 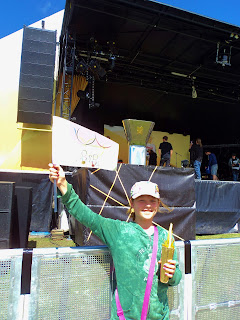 The whole thing looked and felt just like a Sunday village fete, the kind I've read about in Agatha Christie and Enid Blyton books.... if not for the gigantic stage decked out in rock concert-style sounds and lights, and the huge Olympic Flame Cauldron. 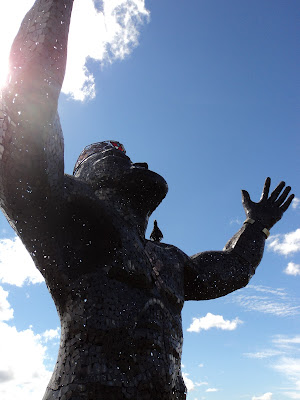 I don't think many village fetes have gigantic sculptures of naked athletes (you could say he was buff, and in the buff), either. 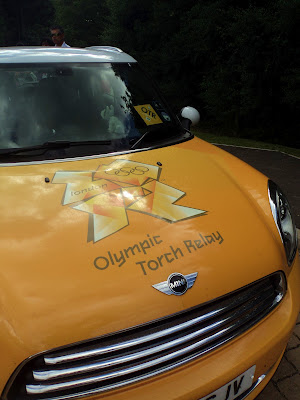 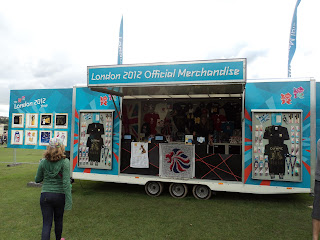 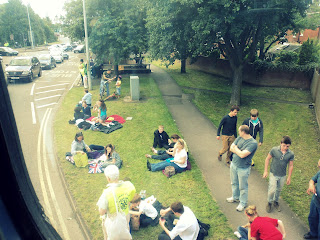 Halfway through the afternoon we took a break and walked to downtown Salisbury to see the Salisbury Cathedral.  We took a free shuttle bus from the town center back to the festival at 5:00PM.  From my vantage point on the bus, I could see that people were already lining the sidewalks of the streets where the torch was scheduled to pass, 2 hours before the Torch was due. 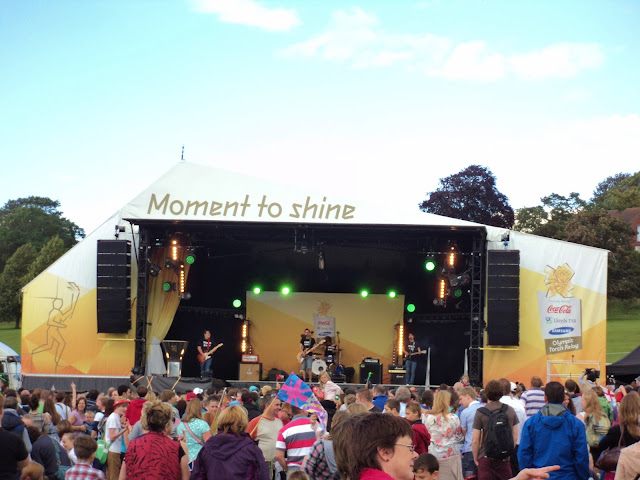 By this time, the festival was much more crowded, and the entertainment was much more contemporary.  Church choirs had been replaced by rock musicians and hip hop dances, and everyone was in a party mood. 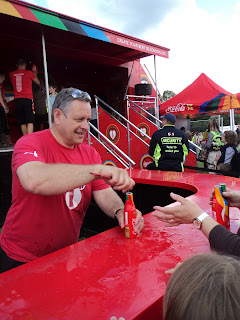 The sponsor trailers had opened, and were in full swing.  All the sponsors (Samsung, Lloyds TSB, Coke) had a photo booth where you could get your photo taken with a fake Olympic Torch.  They also had games and activities, and Coke handed out free Coke Classic and Coke Zero, in special Olympic Torch Relay bottles.  When it started raining (amazingly, it stayed dry and sunny most of the day, and didn't start raining till almost 7:00!), the Lloyds people even handed out free ponchos.

*note: um, yeah, right, you can't actually see the Flame in this photo.  I took it without looking into the viewfinder.  It's just a placeholder until I can get a copy of a photo my cousin took!*

At 6:50PM, the Olympic Flame arrived at the festival. We watched and cheered as Dolly Burnett, who was selected for her years of voluntary work with young people in Salisbury, carried the torch into Hudson Field. The crowd was so thick that we could just see the tip of the torch (thank you, London 2012 Committee, for designing an ultra-tall torch that could be seen by everyone!) as Dolly made her way through.

Dolly lit the Olympic Cauldron, and the celebrations continued till late in the night.

We had an amazing day -- there was no better way to start us off on our Olympic adventures!