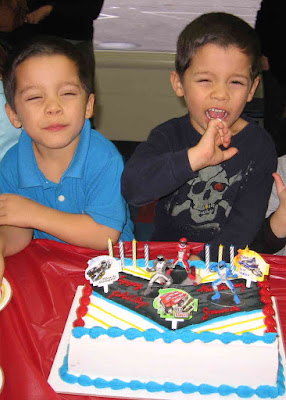 3Po and Jammy are 8 now, and this year marks a very special first: they'll be holding separate birthday parties, with different themes, different activities, different food and different guests. Having one party per child is practically given when you've got singletons, but when you're a twin, you have to share a birthday, and sharing a party is so much easier. When boy-girl twins get older, it's natural for them to have different interests and friends of their own gender, so splitting up parties is a much easier and more natural progression. 3Po and Jammy, though, are identical twins who happen to have identical interests and almost identical friends, so having separate parties is a Big Deal.

When 3Po and Jammy were babies, they didn't care. When they were toddlers and preschoolers, they didn't care either because they didn't know any different. They didn't even have separate cakes; I just bought a huge sheet cake, had the bakery put their names on opposite sides of the cake, put separate candles on either side, and had the guests sing "Happy Birthday" twice so each boy could hear people sing their individual names (not "Happy Birthday, 3-Po-and-Jaaaaaaaaameeee......") and blow their candles individually.

Okay, I admit, laziness had just as much to do with it as practicality. After 8 years, the guilt of making them share birthday parties has caught up with me, so this year, instead of gently steering them towards a shared party, I left the decision completely up to them. 3Po is having a Mario Kart party, and Jammy is having a Lego Ninjago party. They still share almost all the same friends (although some are closer to one boy than the other), but they've managed to "split" them up so that no-one is invited to both parties. I'm hoping parents will only buy a present for the child hosting the party, not for his twin.

Both boys want their parties at home, which means I can't palm off any of the work to a bowling alley or laser tag center (which was their initial idea, and my personal preference), but also means that I can spend a bit more on party favors and themed decorations. I do want to make their first individual parties extra-special, so I'm spending more time than usual planning decorations, buying supplies, etc... After all, I've planned 8 parties in the past 8 years when I should have planned 16, so I owe them.
posted on Friday, January 13, 2012 Labels: birthdays, parties, twins
Email ThisBlogThis!Share to TwitterShare to FacebookShare to Pinterest

Oh wow. You are going where I'm hoping I never have to go... Hope it all works out - looking forward to seeing how it all goes. Good luck with this!

Sorry about this. I always screw up leaving a comment on this platform...that was me, Linda DLR!