Getting up at 6AM for an early morning flight after 3 days at BlogHer -- conferencing, networking, walking and partying -- is not something I recommend. However, early flights do have the consolation of light road traffic and short security lines, so I've been able to get to the airport early enough to sit and get my thoughts together about BlogHer 2011. I did the same thing last year, when I wrote a post about the Best and Worst of BlogHer 2010. This year I've decided to stick with The Best of BlogHer 2011 (with only 1 exception), mainly because I enjoyed myself so much that I can't really think of anything to complain about. So without further ado, here's what I loved best about BlogHer 2011: 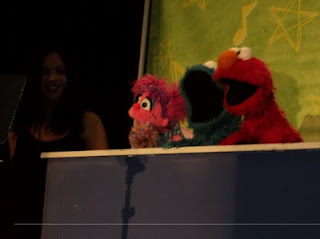 Abby Caddaby, Cookie Monster and Elmo teamed up to offer bloggers advice on how to make their blogs more interesting (cookies!). At the end of the session, attendees lined up to pose for photos. Bloggers had to sign up for the session on a first-come-first-served basis, and even then, people started lining up in front of the session room (to get good seats and be first for the photo opp) 1 hour before the session started. 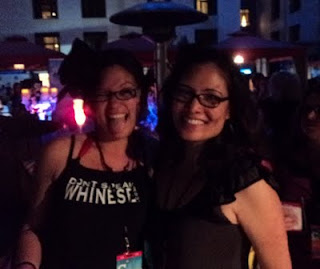 Leila from Don't Speak Whinese rocked the Clever Girls party in a perky Cirque-du-Soleil-ish hat and halter top she made herself from a plain t-shirt. She gave me instructions on how to do it myself, but with my sewing skills it's going to end up looking like a rag, so I hope she starts selling it on her Don't Speak Whinese store. 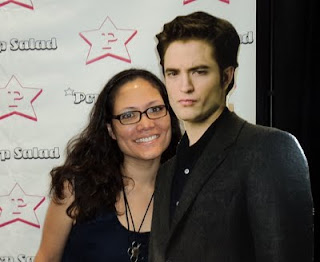 There was no shortage of celebs this year, with Ricki Lake, Jane Lynch, Giuliana Rancic, Brandi Chastain, Rob Pattinson's cardboard cutout, Smurfette, the Pringles Mascot and the Jimmy Dean sun all making appearances at sessions, parties or the Expo floor, but the prize goes to my favorite star trainer, Bob Harper from The Biggest Loser, who led a sold-out exercise session on Saturday morning. My friend Lia and I stalked him afterwards, but didn't have the nerve to ask him for a photo since he was deep in conversation (we're the civilized kind of fans). Runners-up: the Sesame Street Muppets and the Pine-Sol Lady! 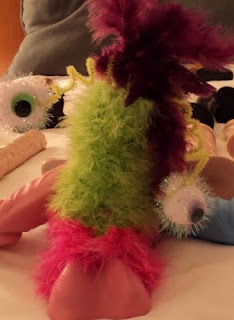 The most outrageous party I attended did not involve liquor, dancing on tables or fistfights. The room was small and brightly lit. There were cupcakes and soda. We did some arts and crafts. To understand why it was so outrageous, you have to visit the sponsor's website -- and take a very close look at the photo above to identify exactly what my cute little craft is made of (hint: look at the items in the background). All I can say is, !!!!!!!!

Best Roomies
I booked a room at the Marriott early in March, but resigned myself to bearing the full cost of the room because I wasn't ready to look for a random roommate. So when I heard that Kim from MomImpact and Reluctant Renovator was looking to share a room, I didn't hesitate. Kim landed me my very first product review gig, and we've been friends ever since, so it was a no-brainer. She is as nice and friendly IRL as she is online! Meagan Francis joined our lit

tle band a couple of weeks later; how could I pass up the chance to room with such a huge blog celebrity? Meagan is amazing: down-to-earth, friendly, funny. Neither women lurched drunkenly into the room at 3AM with random strangers, and neither of them snore. What more could I ask for in two room mates? Meeting them was one of the highlights of BlogHer 2011.


Best Conference Mates
I've been friends with Kim from Tippytoes and Tantrums, Lia from Mama's Starting Over and Robyn from Whos the Boss since our Silicon Valley Mom days. Now I write for Robyn and Kim's Silicon Valley Mamas, and hardly a month (or two) goes by without running into them at some local blog event or another. I tend to flit about at conferences, from session to session, group to group, but I always look to them for companionship, camaraderie and a darn good time. They are my gals, and I love them.


Worst Drama
This is the only negative item on my list, and it had nothing to do with the conference organizers, sponsors or attendees. Every year I've attended, it seems there has been some sort of conference drama ( greedy swag hoarders, bloggers pushing their sponsors' cards/freebies on other bloggers, shockingly drunken behavior), but I haven't heard any rumors of the sort this year (yet). This year it was pickpockets. Apparently several people had their wallets swiped at the Expo Hall, so hopefully they'll beef up their security next year. There's one tip for future conferences: Watch your Wallet!


Best Swag
I really liked the swag this year. I think companies really gave it a lot of thought, looked at the stuff in the swag recycle room and made an effort to come up with unique items that bloggers would appreciate. Or maybe it was because I wasn't so greedy this time, and I only picked up the stuff I really wanted. In any case, I'm going to have to defer this category so I can look through what I have, see how the kids like it, and give it some further thought!


Next year's conference will be held in New York City on August 2-4, at the New York Hilton. We'll be in the UK for a good portion of the summer of 2012, and since the 2012 Olympics will be held in London from July 27 till August 12, there's a good chance our trip will coincide with BlogHer 2012 and I won't be able to go. I will be sad to miss the craziness and the camaraderie. Then again........ so far we've only managed to get tickets to one soccer game, and that game is going to be held in Wales -- and most importantly, a flight from NYC to the UK is just about the same distance and length of time as a flight from San Francisco to NYC. So who knows...... maybe I will see you at BlogHer 2012?!
posted on Sunday, August 07, 2011 Labels: BlogHer, bongga stuff
Email ThisBlogThis!Share to TwitterShare to FacebookShare to Pinterest

I love this wrap up!! Not because I am in it (love that pic btw and thanks for mentioning me!) but because I am sitting here cracking up over your crafts!! OMG! So sad I missed out on that one!!!

It was a blast meeting you! You inspired me to do a tutorial on that shirt and I may just have to do a giveaway!

See you at the next BlogHer!

Glad you had a nice time. Sorry I missed it this year.

Aww, blogher looks like it was so much fun! I wish I could've gone... Although, I might have tried to steal that Rob cut-out ;D
-Rachel

bummer about the pickpockets. i'm glad that didn't happen to me. :/ i'm looking forward to next year, and that DIY/crafts party - AMAZING. ;)

I have never laughed as hard as I laughed when with you three. Thank you for the fun!

Great to see you but it's never enough time!

Pickpockets? How aweful. Maybe that's what happened to a blogger we met crying who couldn't find her iPhone .
It was fun to walk/talk with you across sprawling event.
I walked San Diego Zoo Sunday instead of flying home like you & my ankles swole up from all those days walking all day & night.

Hope to see you at palo alto street fair tomorrow