Back to School, Back to Soccer 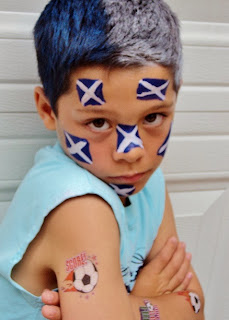 Woo-hoo, soccer season is starting up again! 3Po and Jammy have spiffy new soccer cleats and a couple of weeks of soccer camp under their belt, and they're ready for their first team practice on Wednesday. I know many parents are groaning at the thought of all the carpool schedules and snack rotations ahead of them, but I couldn't be happier.

Last year I fully embraced my role as a soccer mom, and I'm confident that this year is going to be as entertaining and rewarding as it was last year. Their team lost just one game last season, but that's not why I enjoyed it. I had tons of fun socializing with the other parents and yelling like a rabid lunatic cheering our kids on at practices and games. Whoever thought that watching a bunch of seven-year-olds thunder towards a ball like a herd of elephants could be so exciting?

Of course, it's not always all sunshine and roses. I have to deal with the boys bickering about which of them got more time on the field. I have to deal with one boy crowing to the other that he scored more goals. I have to deal with hurt or angry feelings when they feel that one boy cheated, or that the referee's call didn't go their way (being two of the few 7-year-old-boys in their local AYSO who know about the Offside Rule or what a Backpass is can definitely be a disadvantage). Last year we really lucked out and found ourselves with eager boys and supportive parents; this year might not be the same.

Worst of all is having to deal with injury, or the scare of injury. There was the time a teammate stomped on 3Po's finger so hard that blood went flying (fortunately, no broken bones; the blood was from a popped wart that had been lingering for months, so in the end it was a good thing!). There was the time Jammy got stepped in the face. As they get older, rougher and stronger, it's only going to get worse. I know ankles get sprained, shoulders get dislocated and bones get broken. My blood curdles just thinking of it.

But in the end, it's all worth it. It's worth it to see the joy on my boys' faces as they throw themselves, heart and soul, into the Beautiful Game that the whole family loves (instead of Friday movie night, our family gathers around the telly to watch the Barclays English Premier League preview show!). It's worth it to see them improve and excel, to see them learn not just good soccer, but good sportsmanship.

In the end, it's worth all my hassle and mental anguish, because it's not about me, it's about my sons. I just have to suck it all up and commit to supporting them however I can, whether that means cheering myself hoarse, or drying their tears, or biting my tongue when I think the coach didn't give Jammy enough playing time, or making sure they have a drink of water between drills.


Calling all soccer moms -- would you like a chance to win a soccer ball autographed by Brandi Chastain? Cool, huh? Then click here for my Gatorade giveaway!

posted on Monday, August 29, 2011 Labels: about me
Email ThisBlogThis!Share to TwitterShare to FacebookShare to Pinterest

Charlie has decided to keep playing flag football instead of soccer. I much prefer soccer.

We live in a small rural town so there aren't many sports to pick from. We have basketball and softball. My daughter played both from 4 years old but stuck with softball when basketball was no longer appealing to her. Her dad and I have coached teams, driven to countless practices and games, and been there for the blood, sweat, and tears that have gone into her ball career. We have loved every minute of it. I have been threatened by parents and umpires both because I am too into it. lol. Good at it or not, I think it's fantastic for kids to play sports. My husband will tell you to this day that football playing was one of the best things that ever happened to him. He says he learned countless lessons about himself and about life.